After nearly two years of cat ownership, I've been well and truly trained by my two cats: Barney (stupid and loveable) and Mama (taking over the world).  Many things about these two felines amaze me, and this post is about why.


First of all, both cats sleep an incredible amount of the time!  Barney is the champion here, though Mama is no slouch herself.  After many long naps all day, at 11 p.m., Barney wearily climbs onto what I think of as my bed in the Master Bedroom and he thinks of as Barney's bed (or, at best, the "mammal bed," given that he must share it with both Mama and me), and then he's down and out until about 9 a.m.  When I first acquired Mama (before Barney), I was initially worried that she was  sick, since she seemed to sleep too much (I grew up with dogs).  I later learned the interesting fact that cats sleep more than any other mammal on the planet.  A cat that lives to be fifteen will have been asleep ten years of its life!  [Since writing this three years ago I've learned that it's not true: koalas have the record, sleeping up to 20 hours a day!]

My two cats are very different from each other (though they are buddies).  Barney is a "get-along, go-along" kind of guy.  Mama, on the other hand, believes to the very core of her tiny being, that she is in charge of not only Barney but also of me (the "Big Mammal"), and she's annoyed when I don't agree with that assessment.  The only reason she doesn't prevail in our frequent disputes is that Mama only weighs ten pounds, and I weigh . . . more than that, and—damn it!—she can't figure a way around this annoying weight disparity.  She saved my life last summer (see "Related Posts" below), so I cut her some slack on this, and sometimes let her win our battles.


When petting cats, I have the same rule that I have for teaching law students, impressing people in conversations, acting, or even sex: see everything through the eyes of the other entity.  When either Mama or Barney climbs into my lap with the clear message of  "pet me now— it's important!" I do so with a determined effort to experience the petting from the cat's point of view.  What does he/she like and what does he/she not like?  In this, my two cats are very different.  Mama loves to have her head completely enclosed, as if I were grasping her head from the front in a grip that will deprive her of both sight and sound.  After I've petted her in the usual way for awhile, I slowly work up to this, and—since she's knows it's coming—she gets impatient and forcefully thrusts her head into the palm of my hand.


Oh, but Barney would really hate that!  He was much abused as a kitten/young cat, and to this day jerks his head away from even a slow frontal approach by a human hand, even mine.  It's very obvious that Barney was often slapped and slapped and slapped again, and he definitely doesn't want his head touched from the front.  But—"PURR, PURR, PURR"—stroke me on my back, he begs, and then my belly, now try the ears, and eventually—oh,yes!—my whole head.  "PURR, PURR, PURR!"   It gets loud.


Barney loves being picked up and carried around, and to this end will climb (or jump) into my arms, or even into the arms of surprised total strangers.  Mama hates being lifted off the ground.  In the photo below she's savagely thinking "Put me down!—what the hell are you thinking?" 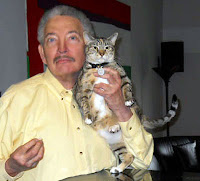 I swore when I first acquired Mama that I wouldn't let my new cat sleep with me, but, alas, I was given little choice.  Lock her out of the bedroom and she'll spend hours, off and on, all night, scratching at the door with determination.  This keeps one from sleeping.


I now accept that I will sleep every night until I die with two cats warming themselves on my body, and both (well, at least Mama) being resentful if I get up in the middle of the night for any reason.  My cat-loving friend Pamela (who has seven cats—down from a high of thirteen) says that all cats are "heat whores," and she's right.  The Big Mammal is a major source of big heat, and both Mama and Barney snuggle in close, not caring a whit for my comfort in this matter.

But this post is entitled "Stepping on Cats," so perhaps I'd better address that.  Any cat owner will tell you that at some point in cat ownership you will accidentally step on your cat, usually a foot being trodden upon.


What's interesting about this is how very differently Barney and Mama react to being stepped on.


About a month ago, and for the first time in the year and a half he's been here, I accidentally stepped on Barney's foot while getting ready to put the cat food down on the floor to feed them.  Barney yelped and started to run.  It's been my experience that when Barney's frightened (which does not happen often) he disappears like lightening into some far corner of my condo, where he'll hide and quiver with terror.  That's certainly what I expected when I stepped on him, but instead he only ran about five feet and then he turned hesitantly and looked back at me.  His ears were down in a dejected, submissive posture, and his big eyes were wide with one consuming question: "It was an accident, right?  You didn't mean to hurt me like all those other Big Mammals used to do, did you?"  Much moved, I picked him up and cuddled old Barney good, murmuring reassurances in his ears.  He started purring right away, and we were fine.


Mama, on the other hand, is constantly being stepped on.  She has a real genius for being underfoot, and it's no accident that she's frequently in the Big Mammal's way.  When excited by the preparation of cat food, she goes into a rapture, and in her frenzy not only purrs loudly (you could hear her in the next room), but rubs up against the food preparer over and over, eventually becoming so excited she throws her little body hard against the food preparer, attempting to rub against the upper thigh while in mid air.  Try as one might to avoid it, Mama will get stepped on in this excitement.  When this happens, she gives an impossibly loud SHRIEK!  After that Mama bolts from the room and goes to some secret corner, screaming with more pain than is really felt.  To placate her, I must seek her out and humble myself at her feet with multiple apologies.  Ever the diva, she lives for these moments in which the Big Mammal is the "little mammal," and after some sniffing with distain, will finally . .  reluctantly . . . forgive me.
------------------------------------------
Related Posts:
“Dog Meat,” December 27, 2009
"Parakeets and Me," February 5, 2010
“Bears,” February 23, 2010
"Mama, Biopsies, and My iPad," May 19, 2010;