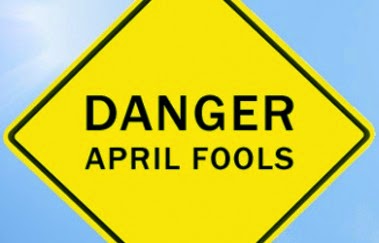 As described in this blog in past posts [see Related Posts below] my mother was not to be trusted on April Fool’s Day.  Every April 1st was a morning that I awoke with dread, or, if I forgot, regretted my mistake.  My sister, Mary Beth Colpitts, has carried on this tradition, though—thankfully—not with me as its intended victim.  As this post reveals, I myself am not above mischief on this traditional day of fun.


I was married this past November to David Vargo, a wonderful man who trusts me.  A perfect setup for April Fool's Day fun.  But I knew I had to play it carefully.  David is a sensitive person and I didn’t want to worry him with some cruel exploitation (“I have cancer”), even if very temporary.  A good April Fool’s prank is harmless, and the best ones raise the spirits instead of depressing the victim . . . er, subject of the joke.  I rejected a number of possibilities before settling on the scheme I chose.


We have two cats, much discussed in this blog: Mama and Barney.  Mama is so named because at the age of twelve months, declawed but not spayed, she got out of her prior home, had an adventure with a tomcat, and produced a litter of kittens in the urban wild before she and two surviving kittens were rescued, taken to a vet, the kittens weaned, and Mama (now spayed) passed on to me to raise (four years ago).  Barney is a tom, large, grey, friendly, dumb, extremely lovable.  He was neutered and declawed when I took him home from a cat shelter also four years ago.    David loves both of these cats very much, and that affection is reciprocated.  Barney follows him around like a dog when David comes home from work.

So on Tuesday, April 1 of this year I texted David the following message:


Mama hacking like hairball caught in her throat so I took her to the vet.  He says she is pregnant!!!  I told him that was impossible but he explained the ways it could have happened, which I’ll detail for you tonight.  In any event, get ready for kittens.


Almost immediately the phone rang.  It was David calling from work, which he never does, asking for more of an explanation.  I said that it was complicated but that the vet did give us the option of aborting the kittens immediately.  David was horrified at that, and quickly said, “No, no.  We’ll deal with the kittens.”  I thought that was sweet.


When he came home two hours later he was exuberant.  Patting Mama he commented “Preggers, eh?” with a smile, and he picked up Barney and hugged him while cooing “You dog, you!”  At his urging I explained that the vet detailed how it all could have happened, saying that a female cat who is spayed has had her plumbing rearranged, but that is some rare cases it can reconnect, causing her to go into heat.  The vet noted that Mama is something of a butterball and that this occurrence never happens unless the cat gets some real exercise regularly.  As I knew he would David lit up at this.  “Mama is forever tearing around the house at great speeds,” he enthused.  Yes, she does; we call her the “galloping cat” when she goes whizzing by.  “But what about Barney?” David asked.  “Well,” I went on, “the vet says the same thing can happen to a neutered male, and particularly if a female goes into heat.  The vet asked me if Barney shows any signs of an interest in sex.”  “Yes!” David replied firmly.  In spite of being neutered Barney masturbates every night, though his rubbing against the bed clothes produces nothing more than an apparently satisfying climax. I continued, “The vet said that in very rare circumstances neutering too can come undone.”


“This is all really unlikely,” David remarked, shaking his head, puzzled.  I lit up.  “The vet said the same thing—that the odds of either thing happening to one cat are great and the odds that it would occur to both at the same time mathematically almost impossible!  But then the vet added that ‘Someone has to hit the lottery in spite of similar incredible odds, and this is just like that except instead of $400 million you get kittens!’”  David laughed delightedly.  “Can you imagine how wonderful the kittens of Barney and Mama will be?”


The joke having succeeded it was unfortunately time for the decompression.  “The vet also added,” I continued, “that these things are most likely to come together at this particular time of the year.”  David didn’t understand, so I elaborated, “April 1st.”


The light dawned.  “NOOOOO!!!” he wailed.  “No kittens at all?”  My poor husband was torn between laughter and the major disappointment that we weren’t about to have a birth event in the condo as so recently contemplated.


Our good friend Pamela is now down from thirteen cats to five, and when she heard this story she snorted in derision, “No one could believe that!  When a cat is spayed they don’t just disconnect things, they cut them out!”  But when I carefully related my prank as if it were an actual event to five or six other people (including my prankster sister, who heard the story on April 1st) they all fell for it just as David had.  Pamela is an expert on cats in a way that most people are not.  And we all root for motherhood.


I’m already planning next year’s April Fool’s Day stunt, but it will have to be carefully executed.


David’s on his guard now but we’ll see if it holds up for an entire year. 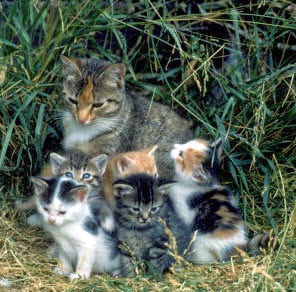