February 29, 2012
.
All my adult life I've engaged in a rather vigorous workout involving weights and cardio exercises, and was even something of a bodybuilder through my 50s.  Gay men, unlike straight men, have to keep in shape for reasons I've explained elsewhere (see "Men, Women, and Pornography" in Related Posts, below).  But early in 2011, due to various medical problems also explained elsewhere (and from which I've made a complete recovery), I dropped over 40 pounds and came very close to dying twice.


The worst of it was the spring of 2011, when I was losing the weight rapidly, playing in "Hamlet" (as the evil King Claudius—I missed three performances when my kidneys failed), lying to myself that I was fine, but ignoring the obvious fact that I was not.


The problem was that I had no appetite (due to the medication I was taking), and everything I put in my mouth tasted like a lump of paste.  It didn't matter whether it was fresh hot bread, or chocolate, or a juicy steak: it tasted like paste, and it was repulsive.  One evening, much worried about the weight loss, I forced myself to eat all of a chicken pot pie ("It's important, it's good for you, and, damn it, you will eat it!").  It took an hour, with much gagging to keep down each bite as I swallowed it.


By early summer when I glanced in the mirror in the morning, I saw something that looked like an Auschwitz survivor looking back at me.  My clothes hung on me, and I was a walking skeleton.  There are no photos of me at this weight, and, if there were I certainly wouldn't post them.


Bizarre things start happening when your body shuts down: my cuticles disappeared from my fingernails and the nails themselves broke easily (I couldn't open the pop-tops on beverages), my hair began falling out and it grew slower than usual, I couldn't open bottles and jars because I lacked the strength to twist the caps off.  If a set of steps had no railing or banister, I couldn't go up or down because my balance was so bad.  Then I lost feeling in both my feet, and had trouble telling when I was pushing hard enough on the gas pedal while driving or finding the energy to take my foot off of the pedal when I didn't want to accelerate.  It occurred to me that I might have to quit driving, and—horrible to think about—how in the world would I get around then?
I fell a lot, which is dangerous for people of any age and particularly those whose bones are old.  I simply lacked the strength or will to coordinate my usual movements.  One May day in Staples I was weak and tired and dragging my right foot when it caught at the toe.  I went down like a statue toppling over, face first, and struck the ground with a loud smack.  There was a moment of silence all around as people (both employees and customers) were stunned by how hard I'd hit the linoleum floor.  People rushed over, babbling ("Are you hurt?" "Was there something you slipped on?" etc.), and, much embarrassed, all I could do was mumble "Clumsy, tripped."  But I was too weak and unbalanced to get up on my own, and had to ask for help, at which point one of the larger male employees grabbed me under my shoulders from the back and lifted me gently to my feet as if I were a rag doll.  I thanked him, assured them all that I was fine, and then hobbled to the cash register with my purchase.  That night I noticed my knees were scabbed and my right cheek was bruised bright red.

A week later I had a bad moment in Microcenter when, right in the middle of their large showroom, I realized there was nothing substantial enough to lean against and I hadn't the strength to keep standing upright.  I stumbled, almost falling, to a shelf that teetered but held me for a moment, and then made my way from trembling shelf to trembling shelf to the front of the store.  I had something I wanted to purchase in my hand, but didn't have the strength to wait in line without collapsing.  I grabbed the woman in line in front of me by the shoulder and said to her, "I'm about to fall—get help!"  Alarmed, she propped me up and called out to others, and I was lowered into an office chair on wheels.  Microcenter rang up my purchase, and a kindly middle-aged man helped me to my car, allowing me lean on his shoulder.  I can't tell you how humiliating this all was.


A week later I fell going into a grocery store and landed half on a bench and half on a ten year old boy who was sitting there tying his shoe.  I was scared that I'd hurt him, but the kid was terrific: immediately becoming worried about me ("Are you all right?  Should I call for help?").  Mortified, I apologized for being so clumsy.  A week later I thought I could walk fifty feet to the seafood display in the same store, but was wrong and couldn't make it; I had to lean on the produce display, half sitting, half leaning, panting loudly.  There was no chance I could garner enough strength to walk further without support.  What to do?  I picked out the next shopper coming by with a grocery cart and asked her if she'd be willing to fetch an empty cart for me from the front of the store.  Much the Good Samaritan, she promptly abandoned her own half-filled cart to go grab one for me, for which I thanked her warmly, and then used the cart for balance enough to return to my car.  Again, this was hugely embarrassing.  Thereafter I swallowed my pride and did all my grocery shopping in an electric shopping cart, which took some getting used to ("Watch out!  I'm dangerous!" I'd caution other shoppers as I steered around them, only half kidding). 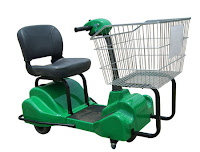 One evening at my condo when I had friends coming over for the some fun, I dropped a glass in the kitchen and it shattered on the floor.  This created a nightmare.  Why?  Because there was nothing in the kitchen that was low enough that I could lean on to get down to the floor, and, even if I collapsed onto the floor, nothing that would afford me the leverage necessary to rise to my feet in my very weakened condition.  Even worse, there were shards of glass all over the kitchen floor and I have two cats, who immediately wanted to see what was going on.  That meant I couldn't leave the kitchen (and go get a broom and dustpan, itself quite a task involving carrying objects up steps). 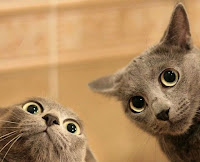 Awkwardly I more of less crashed down and then used various items from drawers to sweep shards of glass into a nearby wastebasket.  Having gotten most of it up, I now had to rise to my feet—but how?  There was nothing only two feet high in the kitchen that I could use as leverage to pull myself up.  So I crawled on hands and knees into the living room and used my recliner to rise slowly and precariously to my feet.  Then I stood there panting for a few moments until enough strength returned so I could turn and collapse back onto the chair.  The whole thing took forever, and just as I settled in the chair, the doorbell rang as my guests arrived.


Then, in early July, I nearly died from system failure, and, as I've reported before (see "Mama Cat Saves My Life") it was only the intervention of my cat that kept me alive (which sounds improbable, but is nonetheless true).  As that post also relates I subsequently started eating again, gained back the lost weight, and by the middle of August was back to doing a rigorous workout and putting on muscle again.  My workout now includes 30 pushups, 30 sit-ups, 30 minutes on the exercycle, 45 minutes on the weight machine, and stretching exercises which I do (in theory) every other day.  For a 68 year old man, that's not bad.


The point of all this is how much we take for granted in the casual things we do when we're healthy.  Last spring if I dropped something on the floor that was a major problem.  I was too unbalanced and weak to lean over, so I'd have to choose between slowly lowering myself to the floor, next putting the dropped item up on a higher spot, and finally crawling to a place where I could leverage myself back up.  In 2012 if I drop something on the floor I simply lean over and pick it up.  What's the big deal?  I'm currently teaching a six-hour one semester course, which has me pacing up and down the aisles near the students for 75 minutes four days a week, and I don't have any physical problems with doing this other than the occasional protest from my traitorous  knees (which are mysteriously older than the rest of me).


Recently, at the end of one of my workouts, just as I finished doing pushups (my last exercise), I pondered whether I could get off the floor by myself without leaning on anything.  Hmm.  It was a startling question given that I hadn't done so in almost a year.  It turned out to be no trouble.  I balanced myself on my legs and then pushed off the floor from the position of a stretching cat.

Oh, but this was a triumph, and more than a minor one!  On some basic level it meant that Douglas Whaley was whole again and his life would go on.  A year ago that seemed most unlikely.