Showing posts from September, 2015
Show all

The Pope In America: Women, Sexual Minorities, and Kim Davis 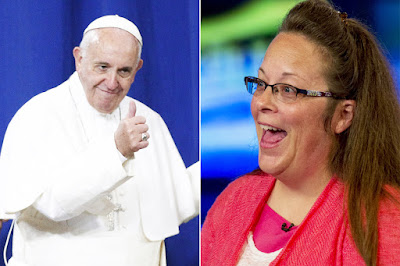 The Pope and Kim In Tom Lehrer’s comic song “The Vatican Rag” [YouTude: https://www.youtube.com/watch?v=pvhYqeGp_Do ] those dancing to the song are advised: Do whatever steps you want if You have cleared them with the Pontiff! That verse came to mind after witnessing the Pope’s rock star-like visit to the United States, which in any viewing was a triumph for him and the Catholic Church.   Thousands of delirious Americans were dancing to the Pope’s tune and he announced he was astounded by how much love they showed him.   My husband, raised a Catholic, but no longer much of a follower, was amazed that so many people adored the man enough to worship him in giant crowds that were so big most of them couldn’t really spot him.   One woman on TV said that seeing the Pope was like meeting God!   Wow!   On top of that some of the Pope’s messages to Americans about the necessity of dealing with climate change and reining in the excesses of capitalism were
Post a Comment
Read more
More posts