Showing posts from February, 2018
Show all

“That Goddamn Song!” David Vargo Turns 60 and Does It Right 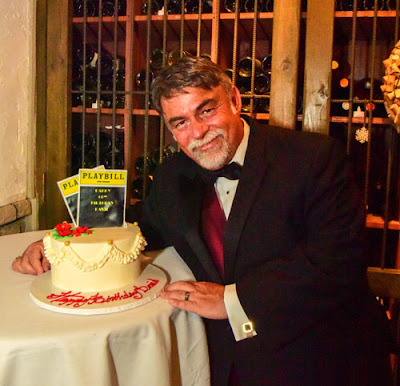 The Birthday Boy at 60 My husband, David Vargo, has always been a talented man, much admired in the acting community, a terrific graphic designer, and the winner of multiple awards for various things (trophies fill our house).   It was therefore a major shock for him to realize that in 2017, like it or not, he was going to turn 60 on December 22.   SIXTY!   YIKES!   A HORROR STORY!   More than that, in 2013 he had married into a chosen family that has rituals for Big Birthdays like this, and such momentous occasions do not pass quietly into the night but are instead celebrated with traditional major public happenings.   Oh, no!   NO, NO, NO!!! One of these rituals, in which David, alas, has participated a couple of times over the last five years of our marriage as one of the singers, is the rendition of the “Big Birthday” song, about which I have often commented on in this blog.   It was written years ago by myself and my son Clayton (and rewritten a number o
Post a Comment
Read more

Opening in Another Play: The Pulitzer Prize Winning “Proof” 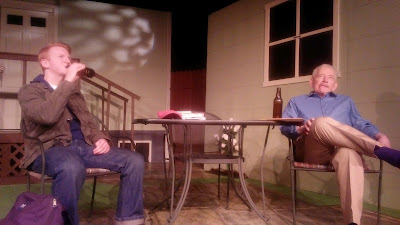 John Sorenson and Me Last night we opened in “Proof” for a three week run at Little Theater Off Broadway in Grove City, Ohio (a suburb on the south side of Columbus). It's a drama with some very funny parts and involves a woman's search for identity in the shadow of her brilliant but mad father, a titan in the world of mathematics.  Her problem is that she had to care for him during much of his later life, slowing her own pursuit of mathematics.  After his death she produces a brilliant new mathematical proof that amazes everyone who sees it.  She explains that she wrote it, but even those close to her believe it is really the work of her father and she is either (a) lying or (b), like him, crazy.  The terrific play by David Auburn not only won the Pulitzer Prize for Drama in in 2001, but also the Tony Award that same year. There are four characters: Catherine, the young woman in question, her sister Clare, a young mathematician named Harold Dobbs (who is ro
Post a Comment
Read more
More posts