Showing posts from May, 2016
Show all

Discrimination in the Name of Religion: Methodists, Religious Freedom Laws, and What’s Right 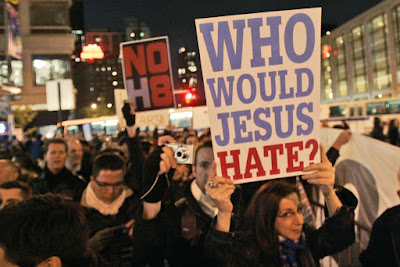 In the 1980s when I was heavily involved with gay rights in Columbus, Ohio, I was invited to be a speaker at a downtown Methodist church where the congregation was breaking in two over the issue of recognizing LGBT rights—a startling idea in those days.  One of the most incredible speakers was a young man, openly gay, who was currently in the seminary studying to be a Methodist minister.  When more or less everyone there pointed out to him that the Methodist Church condemned homosexuality and certainly would not allow him to be ordained, he smiled and explained with tremendous sincerity, his voice like an angel, that “My calling is so strong, so long felt, so deep , that I know in my heart that God would not call me to take this path if it didn’t lead to fulfilling my mission within the Church.  I know that before I graduate the Church will change its mind and open its arms to welcome gay people into its flock.”  He was on the verge of tears as he said this.  It was ve
Post a Comment
Read more

In the fall of 2009 I went from clearly dying of heart disease (atrial fibrillation) to near perfect health.  The reason for this dramatic shift was the heart transplant I received on Monday, November 23, 2009, just days before Thanksgiving, an event I’ve written much about (see “Related Posts” below). It is a startling change to go from planning one’s death to planning one’s life, and as part of that process I hit on the idea of starting a blog.  My joke at the time was that that beginning a blog is “ required by law whenever one experiences a life-altering event.”  Since I’m a lawyer some people thought I was serious. My blog’s first pitiful post was dated Thursday, December 17 th of that year and was quite short.  It did, however, contain this pithy comment: “The whole experience has been like science fiction.” From the very beginning I was determined not to make my blog posts full of idle chitchat about my day or the meals I ate, etc.  Instead
Post a Comment
Read more
More posts