I returned to Ohio in early April after my three month snowbirding experience in Fort Lauderdale, Florida, with the need to sell the condo in which I’ve lived for almost seven years so I can then move back to the Sunshine State and begin life anew.  So I promptly put my condo on the market, and made some changes to make it more attractive to potential buyers.

At the same time my increasing age is catching up with me, so it was clearly time to deal with my knees, which are mysteriously older than the rest of me.  The more evil of the two is my right knee, and it’s been bothering me a good deal for the last couple of years.  The left also has its pains, but the right one is the major sadist.  I ended up in the office of Dr. Andrew Glassman of the Ohio State Hospital faculty.  He asked me how often I thought about the problems with my right knee.  Ten times a day, he guessed?  More than that, I responded: every time I stand up or sit down or climb into a car, turn over in bed, etc.  All right, he ruled, it was time to schedule the operation, and he promptly did so for a month away, May 17th, a Friday. 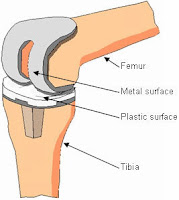 It’s interesting how our mind/body connections work.  Within 24 hours of this scheduling my right knee was completely free of pain or symptoms of any kind whatsoever.  “What pain?” my right knee had the audacity to ask me.  “See, you sissy, no pain at all!  What you’ve got here is a teenage knee!  Want to climb steps?  Hell, let’s climb them fast.  Want to run?  We could run!”  It was like a miracle.  I asked Dr. Glassman if he’d seen this phenomenon before. “Oh, yes,” he replied, “and do you know what would happen if we cancelled the surgery?”  Yes, I did.  So it went ahead as scheduled, and I plunged into a life of constant pain, and therapy, and major pain pills, etc.  First Barbara Shipek, the woman who runs my life (see Related Posts below) came to do her self-described “Nurse Ratched” act for a week, and then was replaced by Barbara Williams, professional cook from Toledo (and founder of the Great Lakes Atheists group, and primary promoter of my novel, “Imaginary Friend,” of which she says she’s my number one fan), who was here for four days.  Both of them were terrific in dealing with my invalid status (and, okay it’s true, I love being waited on and cared for, particularly when in pain).
Both women had to deal with the fact that my condo was on the market, so they had major duties in getting the place ready for showings.  Normally when the potential buyers arrive the seller vacates the premises, but that was impossible here (and they were so warned), so I would greet buyers and their rental agent, invite them to look first at the master bedroom, and then I and my caregiver would move into the bedroom, shut the door and leave the buyers to look over the rest of the place in peace.  When they left, David Vargo, the new man in my life who I met in Florida earlier this year, came to visit for four days and was very helpful in making life worth living on many levels before he had to return to his job in Fort Lauderdale.  In the photo below we got out of the house and can be seen renewing our mutual interest in frog statuary. 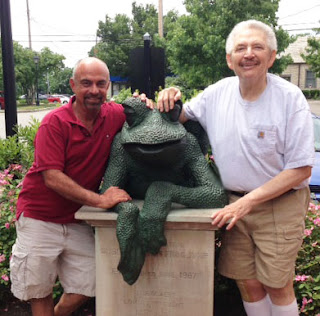 And what, you might ask, do cats have to do with any of this?  They did play a part both in the condo sale and my recovery from the knee replacement.
When potential buyers come to see the condo the owner is supposed to leave, but (once I was able to vacate the premises before and now after the surgery) there was no way to take the cats with me, so I posted on the front door a notice saying “Two friendly cats are inside, please do not let them out.”  Mama, my smartest cat, loves visitors, so unless asleep my guess is that she greets them at the door with much rubbing of the legs and then walks all over the house as they view it.  I’ve told her to make complimentary comments about the condo, the visitors, and how nice it is to live in such a handsome place, and I’ve no doubt she does that.  When the visitors get to the second floor they will encounter Barney who loves to sleep on the leather sofa up there, but he would rise, stretch, and in his dumb-but-appealing manner beg to be picked up, purring happily.  The cats have done their share to sell the place.  One of the comments on the internet in a post-visit review stated “The cats were very friendly.”  Another visitor left a post-it note on the front door stating “I’m not interesting in the condo, but I would like to purchase the cats.”
I’ve come very close to selling the place, which went on the market on April 14th.  One woman came back and brought her ex-husband and their son with her, and told me she loved my home.  She then wandered outside, ran into a neighbor who was on the condo board, learned that there is an association rule with a limit of 40 lbs. for dogs as pets, and since she had a 65 lb. dog, there went that sale.  [Here insert swear words I learned in the Navy when but a youth.]


As for the therapy, Mama has been no help at all, wanting to sleep on top of the healing knee, which has me tossing her from the bed at various times during the night, using some of those Navy swear words.  Barney’s been more interesting.  He was abused as a kitten and had never before in his life been loved or loved anyone, as my prior posts explore.  But he’s been with me for almost three years now, and it’s clear that that cat loves me, dimwitted though he be.  Barney, a big beautiful Tom, looks imposing, but is small of brain, and you never know what’s getting through to his limited perception (as opposed to Mama, who’s so smart she can translate from the French).  When Rachael the therapist began her work on me she would get close to the knee and urge me to bend it in various painful ways, which I would do with loud grunts and protests.  This brought Barney from the other end of the house, and he would jump onto my lap.  This was an inconvenience (“No, Barney, get down, what are you doing?”) but no sooner dumped on the floor he was back in my lap, looking suspiciously at Rachael.  When we moved to the bedroom for exercises done lying down, Barney insisted on lying between her and me on the bed.  It warmed my heart to realize what was going on: he was protecting me.  This strange woman was somehow hurting me, and Barney was doing what he could to make sure I was all right.