Two Cat Stories: Mama and Barney in the Wild

July 09, 2011
As readers of this blog know, after my heart transplant I was finally given permission by the doctors to have a pet, but there were restrictions. I had to get rid of my beloved parakeets (who flew to my shoulders every night when I came home), but was allowed a mammal as long as I didn't have to deal with the feces. Well, that eliminated dogs, and I ended up with two much-loved cats, Mama and Barney, both of whom were rescued from the urban wild and now live happily with Old Doug. In prior posts I've told stories about them, and I'll not repeat those here, but as I get to know them both better I've begun to speculate about what their former lives might have been like prior to meeting me. This is all conjecture, of course, but their stories are very different, just as the two cats are very different.

Barney is a little over four years old, and he's quite large (one and a half times as big as Mama), having thick, beautiful dark grey fur which he trails behind him like a small whirlwind as he moves through the room. Barney loves to be petted, and will come up to strangers and rear up, putting his front paws on their legs, begging for attention. But here's the interesting thing: until the last few months he's never been affectionate himself. He never, for example, rubs up against people as cats usually do (though he'll rub up against nearby furniture while purring). Also, he never likes having a hand come directly at his face, no matter how slowly—he jerks away in terror. Indeed, all sudden noises send him running. When the alarm system in my house malfunctioned one afternoon and emitted a piercing beep, Barney went up the second floor stairs like a tornado, bunched the runner on the upstairs floor into a tangle, and hid in the guest bathroom (Mama never stopped licking herself except to notice the blur of Barney going by). It took me fifteen minutes to calm poor Barney down. Why would that be? 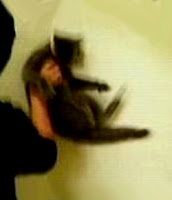 It seems obvious to me that Barney was abused from a very young age. He's afraid of sudden movements, and particularly hands coming towards him, and that suggests beatings. He approaches others when he wants to, but shies away from unknown people approaching him unbidden. Also, alas, he's not smart, my poor Barney (his trials in trying to master the cat doors in my condo are the subject of "Teaching English to Cats," see below), and ideas penetrate very slowly to his consciousness. Mama knows a large number of English words; Barney knows five ("Barney," "no," "cat," "wet food," and "window"). My guess is that those beatings resulted in brain damage to the young Barney. The wonder is that they didn't make him mean or reclusive—he's a very friendly, a "get-along-go-along" kind of guy. He knows that Mama and I tell him what to do a lot, and he's fine with that. 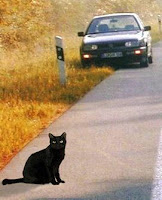 At age three he was found outside an empty home by neighbors who told the cat rescue people that he'd belonged to the family who'd moved out a few weeks before. When contacted in Florida, this family denied ever owning a cat. My firm suspicion is that anyone who would abandon their cat when they moved also didn't treat him very well earlier in his life.

Now things are very good for Barney. If I move very slowly, he'll let my hand come towards his face, and he trusts me in all things (like the indignities of a vet's office). He still climbs into laps and loves being petted, but in recent months it's occurred to me that he's become fond of me. He'll sit in front of me, look at me with no goal in mind, and simply purr with happiness. That's heartwarming, and it leads me to wonder if he's ever loved any other creature before (or been loved in return). Mama comes up to him every once in awhile and rubs up against him purring, and one of these days he's going to do the same back to her. Right now they're great friends, chasing each other around (and it's not always the same cat doing the chasing), sleeping together, and spending much time looking out the windows contemplating life outside, both of which they've experienced firsthand.

No one would name a kitten "Mama," of course. She acquired that name because when she was rescued from a Columbus neighborhood she had two kittens with her. She was one year old, untagged, declawed, but not spayed (what sort of vet would do that?), and feisty—very protective of those kittens. She was taken to a veterinarian, the kittens were weaned and given away, and "Mama Cat," as she was called, became the office cat for the vet and his staff. When I came to pick her up five months after she'd first arrived, both the vet and his staff were misty-eyed at seeing her leave for a new home. She was super friendly with everyone who came through the vet's door, and in fact rubbed up against me as I entered, cat carrier in hand, little dreaming she would soon be off to a new life with this stranger. She still greets all visitors to my home, demanding attention and getting it.

In many ways, Mama is the opposite of Barney. She's very smart, quick to learn, clever at figuring things out, playful, and full of confidence. She's a control freak, as I am, and we're forever battling over which mammal is in charge. At our house the old saying is all too true: "If Mama ain't happy, ain't nobody happy." She's very affectionate, and I'm amazed at how fast and how deeply that cat has learned to love me (see "The Purring Heart," below). 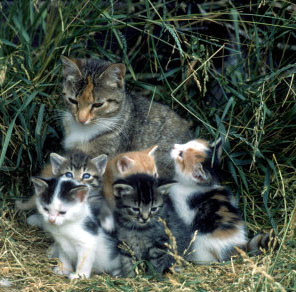 I suspect she has always known love and that her former owners miss her very much. Here is my guess as to what happened to her. One day in late October or early November of 2009 (shortly before I received my heart transplant), she took advantage of an opportunity to explore the outdoors when a door was left open too long (or something like that). Being little more than a kitten herself, she must have been at first intrigued, then annoyed, then worried. But she obviously met a tom cat, had a romantic adventure with him, and then, all by herself, discovered what giving birth alone means. I looked it up: cats typically produce litters of three to eight kittens. Imagine poor Mama and what it must have been like to be inexperienced, clawless, in the cold of autumn, with all those kittens, and no idea what to do. To this day she's scared of dogs and passing cars. Somehow she kept two of those kittens alive until one of the vet's customers snagged her and the kittens and brought them to him.

Mama is also more empathetic than Barney. He's often not aware (or is confused) by things around him, but she's always on top of the situation. When she's annoyed with me (or him), she makes this known. But when I had a recent bad turn of health that prevented me from making a trip to New York, I was so weak I was having trouble moving around, and Mama was right there, rubbing up against me and mewing pathetically, as in "get up—don't just lie there." I'm fine now, and she's back to bossing me around.﻿﻿﻿

We have our rituals. Every evening at around six o'clock I ask the cats "Do you know what time it is?" Yes, they do (even Barney). It's WET FOOD time, meaning I'm about to open a can of wet cat food with much ceremony ("smell the bouquet—it's "tuna feast"), divide it between them and stand back. They eat the kibble happily enough, but wet food is a special treat. I won't serve this culinary adventure, however, unless both cats are present, and Barney (often asleep) sometimes is slow to join us. Mama meows at me ("open the damn can") and I ask her "Where's Barney?" She looks annoyed, perfectly understanding the question, and looks around the corner to see if he's coming. She certainly knows his name, even if he's unlikely to have a clue as to her's. When Barney arrives, licking his lips, the bacchanal is on.

Some interesting things I've learned about cats. Did you know that they don't "meow" to one another? Only to humans—they make various different sounds to cats and other animals. Another fact is that they sleep more than any other mammal. A cat that lives to be fifteen will have slept away ten years of its life.