I grew up with dogs and loved them all, but most of my life I’ve had parakeets.  Not sit-in-the-cage birds, but parakeets with real personalities—smart birds that loved me and became my best friends.  See "Parakeets and Me," February 5, 2010; http://douglaswhaley.blogspot.com/2010/02/parakeets-and-me.html. 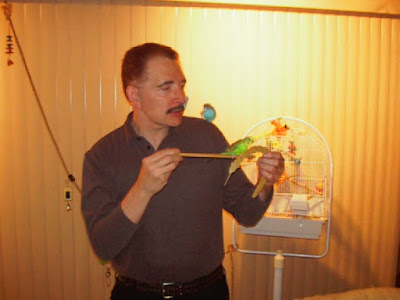 In late 2009 I had a heart transplant and that was the end of the parakeets.  The last I saw of Petey and Alice (my then two birds) was the day the doctors took out my old heart and put in a new one.  Birds, I was told, convey far too many diseases to human beings.  That broke my heart.  Petey and Alice were given away (I never saw them again after the transplant) and the recipient told me they immediately hatched an egg and started a family!

I lived alone in the days after the transplant in a condominium that frankly is too large for one person.  Every afternoon I’d pull into my garage and come through the garage door saying, “Birds!  I’m hom . . .” trailing off as I realized there were no birds about to fly to my shoulder, chattering and pecking fondly at my neck.

It was very, very lonely.  So in early 2010 I called the infectious disease doctor who had counselled me during the transplant period about various issues and told him I needed a pet.  “Okay,” he said, “you can have a mammal as long as you don’t deal with the feces.”  Well that cut out dogs (walking, baggie in hand, to pick up dog leavings), but my cleaning people are cat lovers and told me that they would clean out cat litter boxes in the basement once a week.  I’d never have to touch them.  Hmm.

I have a member of my chosen family, Pamela Maggied, who is a cat fanatic (currently down from a high of 13 cats to, I believe, six).  She informed me that her vet had an office cat that he was looking to give away.  He never kept the same office cat for long, but this rescued cat, which he named Mama because she’d come to him with two kittens (now weaned), was the smartest cat he’d ever met (!) and he wanted to find her a good home.  So I agreed to take Mama, sight unseen, and Pam and I went to the vet’s to pick her up.  As we walked into the office, cat carrier in hand, Mama met us, brushed up against us both, and all but actually said, “Welcome to our happy office!”  Little did she know she was herself about to leave it, with everyone of the staff, the doctor included, teary-eyed.

I took Mama home and let her loose in the living room, sitting myself in my nearby chair.  She looked around, startled, at the large space she was in, sized up the strange situation, and promptly jumped into my lap.  “We’re going to be very good friends, aren’t we?” was her clear message.

She was right.  We were.


Both Mama and Pam taught me a lot about cats and made me into a major cat person.  When I married David Vargo in 2013 he too became a cat person for the first time in his life.

The next year the heart transplant doctor changed my medication, a major mistake, and I went from being a poster child for the transplant movement to a man who was close to dying from rejection of my new heart.  My weight dropped from around 185 to 152!  When I looked in the mirror I was all bones with some skin hung loosely on them.  But with the help of the doctors and some medically savy friends I started to gain back the weight by the early part of the summer of 2011.

That was good because I was planning mightily on attending a writers' conference in New York City entitled "ThrillerFest," held July 6-10 of the year—and at which I hoped to pitch my self-published novel "Imaginary Friend" (it's an atheist thriller, currently available on Amazon and Kindle) to the country's leading agents.  I had arranged (1) a plane flight leaving that Tuesday at 2 p.m., (2) a five day reservation at the Grand Hyatt, (3) a paid $800 ThrillerFest registration, (4) scheduled dinners with old friends, and (5) tickets for four Broadway plays ("Book of Mormon," "Anything Goes," "Sister Act," and "War Horse").  But in truth I was suddenly growing weaker instead of stronger, primarily because I wasn't eating enough (and that because of being over-medicated).  Did this stop me from going to NYC, weak though I was?  Absolutely not.  "I'll travel by cabs, walk little, spend most of my day just sitting in ThrillerFest seminars—I'll take it easy, but I'm going."  Stupidly, it never even occurred to me to cancel until death was whispering in my ear.

I spent that Sunday and Monday slowly, painfully, getting ready for the trip, and by the time I went to bed on that Monday night, though exhausted, I was completely packed and ready to go.  It had taken me an entire day to pack one small rolling suitcase.  But, hell, all I had to do on Tuesday morning was get out of bed, shower, dress and drive myself to the airport.  That's all I had to do.  That's all.

It was almost impossible.

I was even weaker when I awoke on Tuesday, and I struggled from the bed to the bathroom.  In my shower I have a little plastic stool that I use to put my foot up on when I'm washing, but this morning it had a more important role.  Too weak to stand for the whole shower, I sat down on the stool three times just to rest, letting the water hit me as I panted and panted.  When I finished, I was too weak to stand and dry myself, so I laid down on the bed to do that.  Finally it was time to dress, but that too was a nightmare.  I'd put on an article of clothing and then lie down on the bed and pant for awhile.  It was pathetic, but I was still hadn't considered cancelling the trip.  Nope.  I was going.

Mama Cat was watching all of this very carefully.  In this blog I've written numerous posts about her (and my other cat, Barney), but let me quickly recap her story.  At age one she escaped from the home in which she'd originally lived (declawed but not spayed), had an adventure with a tom cat, and produced a litter of kittens.  The number of kittens in her litter is unknown, but cats typically give birth to three to eight.  Mama somehow managed to keep two of them alive until all three cats were rescued, taken to a vet's office (where she acquired her name), the two kittens weaned and given away, and Mama became the office cat for a few months until she was taken home with me.

That Tuesday morning, as I lay panting on the bed, she suddenly jumped up beside me and stuck her nose in my ear (which she had never done before) while making an urgent "Mew, Mew, Mew!" sound.  It clearly meant "GET UP!  DON'T DIE ON ME!"  Mama had seen some of her kittens die and she knew what death was.

"Mama thinks I'm dying!" I muttered, amazed at the thought.  Then I remembered my family's history of ignoring symptoms, decided she might be right, made a phone call to my doctors, and shortly was in the emergency room.  It turned out my kidneys were failing.  I spent three days being fed through an IV drip, with more than one doctor assuring me that "Mr. Whaley, you'd have died on the airplane from system failure.  The air pressure change would have killed you." 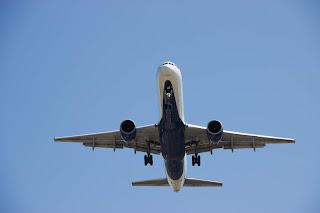 So, but for Mama, I would have died that day.

These days anytime she’s done something that has me fuming and I’m contemplating strangling her (trust me, this can happen), I remember all of this and, well, give her yet another pass, forgiving her latest transgression.

Today, this morning, ten years from that first day with Mama, when I was not quite awake, I felt a familiar cat presence crawl between my knees and settle down.  It was Mama, a heat-whore like all cats.  Remembering what an anniversary this was, I sat up in bed, smiling stupidly, and told her she was the best cat on the planet.  She allowed as how she already knew this.  She’s not the slim young cat I brought home that first day, and she’s a genius at talking David, my husband, into feeding her more food than she needs.  She’s grown into a state that falsely suggests more kittens could be coming soon, judging by her belly.

But when I started petting her, thinking about all we’ve been through together (see Related Posts below), she purred happily at me, as if she too knew what anniversary this was.

I held my face down near hers and said “Nose,” and she promptly touched her nose to mine.  It’s a game we play.

I teared up immediately.

“The Grand Duchess Abigail Abramova: Royalty in the Personage of a New Cat Deigns To Appear in Our Humble Home,” January 31, 2016; http://douglaswhaley.blogspot.com/2016/01/the-grand-duchess-abigail-abramova.html