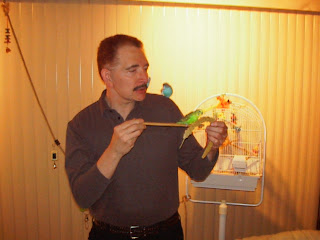 I’m an animal lover, and that goes for dogs (we always had a dog when I was growing up), cats (I had two kittens for a year, and then they died of feline leukemia), etc., but first as a child in Japan, and then for most of my adult life I’ve had parakeets. They are wonderful companions, easy to keep, feed, etc., but with very individual personalities, and, with the exception of Floyd (who hated human beings and thought it was amusing when sitting on a finger brought close to a human face, to bite the nose area immediately between the nostrils—he didn’t last long), the birds were all great pets.

There were a number of wonderful birds, but the best of them was Fred. In 1968, when I was fresh out of law school and practicing law with a large firm in Chicago, on impulse one day I bought a parakeet and a cage and brought him to my apartment in the Marina City Towers. I named him Fred, and had fun playing with him, but it didn’t occur to me that he was particularly interested in me until a month or so later I threw a party for fifteen or so people, which was a lot for my tiny apartment. I had penned Fred up in his cage (normally he was loose), but at one point someone let him out. In a panic at all the people, he flew around squawking until he spotted me, and immediately landed on my shoulder. That changed our relationship dramatically. I realized that he thought of me as a safe haven and could distinguish me from all the other people. That led to a bond as strong as any I have formed with another being on the planet.

As related in another post [“How I Became a Law Professor”], I accepted a job in Indianapolis in late 1969, and Fred and I moved there. For the first few months before I bought a house, we were situated in a small high rise apartment building downtown. The walls were very thin, and I had an inquisitive little old lady who lived next door to me; she seemed very interested in all the residents and liked to gossip. I knew that through the walls, she could hear things I said, which led to being careful when, for example, talking on the phone. It amused me to think that since she didn’t know I was talking to a parakeet, some of the things I blurted out would sound very strange: “You’re going to get your feet caught in the refrigerator!” for example. This would occur when I opened the frig’s door and Fred would land on the top of it, hoping for food. Or: “There is nothing more disgusting than you sitting on my shoulder and biting your toenails!”

One day I heard the newspaper being delivered in the hall as it hit my door. I was dressed in just a t-shirt and jeans, and unaware that Fred was sitting on my shoulder(if you are used to having a bird on your shoulder, it’s like wearing a hat—you forget you have it on). I got up and opened the door to the hallway, and as I bent to pick up the paper, I jarred Fred loose. Not a particularly adventurous bird (as some were), he nonetheless went flying off down the hall. Since there was no place for him to go once he reached the end except to turn around and come back, I put the paper under my arm to await his return. Wouldn’t you know it, this attracted the lady next door, who promptly opened her door and peeked out. We exchanged greetings and then, seeing me just standing there, she asked what was I doing. “Waiting for the bird,” I replied, “Oh, here he comes.” Much winded (it was the longest flight he’d ever had), Fred didn’t fly to my shoulder as usual, but instead landed heavily on top of my head. My neighbor looked startled. “Good morning,” I said as I went back inside. I’m sure she thought that I exercised my bird every day by having him fly the hall.

I married Charleyne in the summer of 1971, and Fred, initially leery of a woman with very long hair, quickly learned to love her (and the hair, which he explored by getting lost in it). We had a number of adventures together before late 1972 when Fred died in a tragic door-closing accident. Charleyne was desolate for days, but I was stoic, being much too macho I suppose to weep over the death of a bird. But a week later we were driving home from a bridge tournament and Charleyne, sitting in the passenger seat suddenly said, “Oh, look the first stars are out!” At which point she recited the “star bright” wishing jingle, which concludes with hoping for a wish to be granted. “What do you wish?” she asked me. Without thinking, I replied, “I wish I had that bird back.” That did it. I broke into tears and began crying so hard I had to pull over into a shopping center parking lot. Char drove home.

I have a great many bird stories, but to cut to the end, my most recent pair of birds were Petie and Alice. We had a good time together for over three years, and I was much distressed to be told by one of my heart doctors that after the heart transplant I could not be around birds, who carry too many diseases that can be passed to humans. This was a major blow. So, when I had the sudden heart transplant surgery, my good friend Barbara kindly took the birds for herself, and I now live in a pet free environment, which is lonely. The doctors do say I can keep a mammal as long as I don’t deal with the feces myself. Well, that pretty much eliminates dogs, who must be walked, pooper-scooper in hand, but does allow for a cat. Nowadays there are self-cleaning kitty litter machines that only have to be emptied once a week. I am looking forward to the cat, but that has to be postponed for months until my lung infection is completely gone.

In the meantime, due to habit, I find myself talking to birds that aren’t there (“I’m home, birds!”).
I miss them very much.