Here is the entire letter I received, which the writers (signed “Barbara and Byron") sent to all the recipients:

“Byron and I are Andrew’s mother and step father. When Andrew died suddenly at the age of 27, we knew right away that we wanted to donate his organs. Through this process we were able to help improve or sustain life for four individuals, you among them. Although we know people who have benefitted from organ transplants, we are still surprised at the extent of the benefits to the donor family. We are still learning what a blessing donation has been for us. To know that some good can come from our tragedy is comforting beyond measure. We hope that your transplant enables you to more fully enjoy your life.

“Andrew was our youngest son. He has one older brother, and three older stepbrothers. Andrew was a man with a presence. He was very bright, a perfectionist, and a questioner of authority. Andrew loved philosophy which was his major at Kenyon College, along with psychology. He graduated in 2004. One of his professors described him as ‘a true intellectual, a lover of mental challenges.’ Andrew read widely in philosophy and really enjoyed deep philosophical discussion.

“In the years between college and starting graduate school Andrew worked as a research associate at the Center for Learning Excellence at Ohio State University. In September 2009 Andrew began graduate school at OSU for his PH.D.

“Andrew was generous to his friends. He wanted the people in his life to be happy. Andrew loved to cook, and nurtured connections through his entertaining, both from the kitchen and the bar. He prepared many gourmet meals for friends and family, and prided himself on his knowledge of wine, and his ability to mix a good cocktail. Many of our fondest memories concern Andrew and food! The picture I have enclosed is of Andrew cleaning up after the Thanksgiving dinner he prepared last year (2008).

“In the month before his death Andrew had made some major life changes. He and his girlfriend of three years had decided to keep sharing a home after their first lease expired. Andrew committed to a 5-year clinical Ph.D. program at Ohio State University where he could apply his passion for philosophy to real life situations.

“In his eulogy, Andrew’s brother Jonathan described him very well saying that, ‘Some of the qualities we admired in Andrew were his quick wit, his piercing intelligence, his passion and meticulousness when it came to cooking, or even his love of friendly debate, his love of knowledge and learning, his skill in making a great cocktail, his encyclopedic knowledge of the Simpsons, his independent spirit, his unwavering concern for the well being of those dear to him, his generous hospitality, warm embrace, hearty laugh, and bright smile.'

“We are so pleased that you received life from Andrew.”

I am not someone who cries easily, but I didn’t make it through that letter without being a weepy mess.

The photo enclosed, below, shows a tall, handsome young man, with a great smile, cleaning up the remains of a turkey. I cannot look at without a tremendous conflict of emotions: sadness at his early death, tremendous thanks to him and his parents, and a sense of wonder that his heart is beating inside me as I type this. 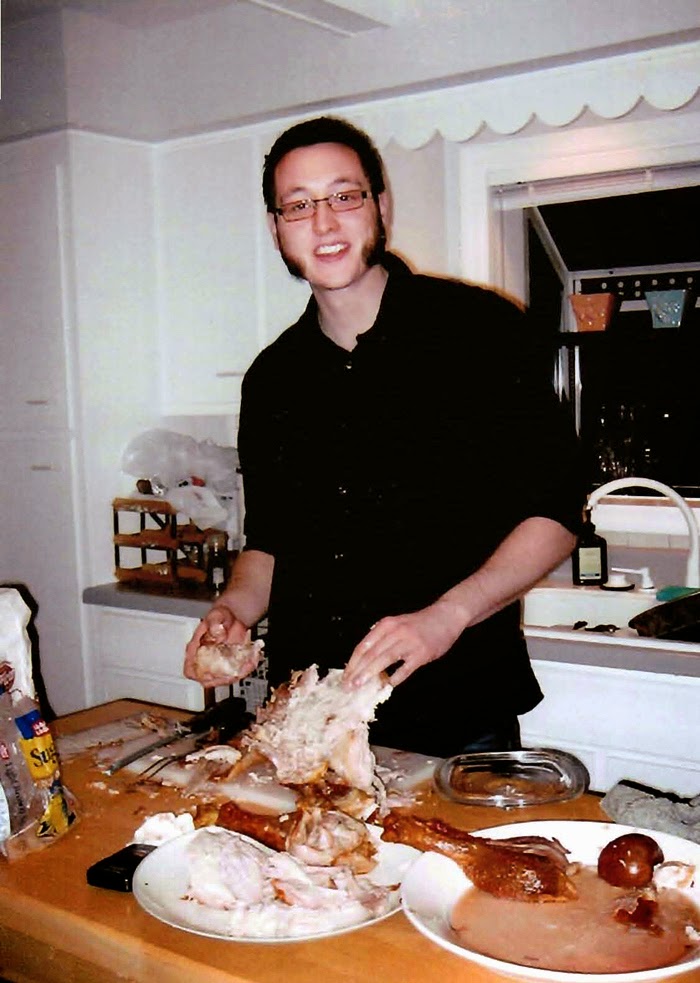