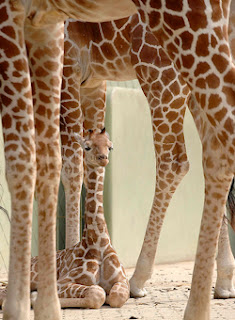 I have always been fascinated by zoos.  Yes, I know that the current thinking is that the forced confinement of animals is a form of cruelty by one species on another, but I also know that many animals are vanishing from the shrinking wilderness and will die out without the efforts of zoos and similar institutions.  In any event, I grew up enjoying zoos as a major entertainment in my life, and I don’t apologize for the love of animals that was fostered by this.


When I was in the first and second grades my family often made trips to the St. Louis Zoo (one of the best in the country), and when I was ten we lived within one block of the entrance to the San Antonio Zoo.  I walked, alone or with my sister, over there five or six times every day during the summer of 1953, which sounds dangerous in 2011 but was perfectly safe in that very different era.  These experiences sparked a life-long reading of books about zoos and animals, and made me a frequent zoo visitor wherever I have lived since.  To name but a few, I've been to the zoos of Tokyo, Rome, London, D.C., San Diego, Cincinnati, San Francisco, Indianapolis, Chicago, Boston, Seattle, New York (both Central Park and the Bronx), and to the wonderful Columbus Zoo, also one of the best in the United States (Jack Hanna, the zoo's leading light, is a frequent guest on Dave Letterman's TV show).


Let me tell you some zoo stories, both mine and those of others.

When I was an 18 year-old sailor walking through the zoo in Rome with fellow sailor from our ship, I was explaining to him that if a zoo animal can figure out a way for visitors to feed it, the animal will show you how to accomplish this.  As if to demonstrate my point, a rhinoceros, seeing we both had popcorn, came thundering from the back of its outdoor exhibit, stuck its large head over the railing, and opened its mouth expectantly.  It's head was in our path, mere inches away.  We laughed.  Somewhat hesitantly, I put a handful of popcorn on its tongue, but nothing happened.  The large beast just stood there, mouth open, waiting.  It occurred to me that the rhino didn't realize there was food on its tongue, so I gently tapped its snout, whereupon the mouth closed, there was determined chewing for a moment, and then the mouth opened again.  This was repeated until we ran out of popcorn. 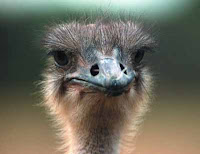 Years later when I was living in San Francisco, I was walking alone through the zoo when a similar thing happened.  An ostrich noticed my popcorn and ran to a corner of its cage where a tiny opening allowed it to stick just its head out onto the visitors' path.   It too opened its large beak, making a squawking noise to attract my attention.  I dutifully walked around the enclosure until I came to the bird.  I offered a handful of popcorn, and was immediately bitten!  That hurt, but no skin was broken, and I stormed off in disgust, taking my popcorn with me, eating it myself. 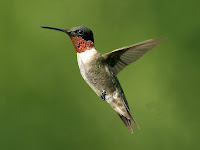 Compare that with my visit to the San Diego Zoo in the early 1990's.  Strangely enough I had never before seen a live hummingbird (nor since, though for years I planted flowers to attract them), but in this zoo I came upon a aviary devoted to hummingbirds.  The public was invited to enter, and I excitedly did so.  What I later learned is that the hummingbirds formerly ensconced here had all escaped—save one—and most of them were living nearby, and could even be seen perched or buzzing above the top of the aviary through the open-to-the-sky wiring of the roof.  The one remaining hummingbird was understandably pissed.  As I walking into the aviary, this tiny bird deliberately zipped to the spot right between my eyes, not even an inch away, startling me and causing me to jump back.  One of the zookeepers laughed and told me about the escape of the other birds, pointing his finger up toward them, and commenting the attacking bird did this  to all the visitors.  It took its revenge by scaring them.

Thinking about it later, it occurred to me that I'd now been menaced by both an ostrich (the largest bird in the world) and a hummingbird (the smallest).  Since I've lived with parakeets much of my life (and certainly been bitten by them—one, the evil Floyd, hated humans and if you brought him close to your face while he was sitting on your finger, he'd bite you on the flesh between the nostrils, pleased by your scream), I can claim to have had close encounters with a large number of avians.


There was a small roadside zoo in Tennessee where a capuchin monkey once stole my glasses.  I was in high school and my family had stopped to wander through the zoo.  My sister Mary Beth and I walked up to a cage filled with the small monkeys.  I leaned down to read a sign pinned to the cage and one of the monkeys snatched my glasses off violently and expertly zipped them through an impossibly small opening in the wire mesh.  (The sign, I later learned to my disgust, said "Beware—Monkeys Steal Glasses!")  Astounded, I muttered, "A monkey stole my glasses!"  So now I couldn't see well, and Mary Beth was laughing as if she was having a fit, later telling me about the thieving monkey zooming around the cage, banging my glasses against things, and then pausing to sit to look through the lenses at odd angles or chew on the parts that wrapped around the ears.  Annoyed, I asked Beth to find a keeper, which, trying to control her laughter, she did.  This man sternly approached the cage and said to the monkey, "Give them back!"  Sheepishly, as if to almost deny their existence, the monkey carefully folded the glasses and oh-so-gently slipped them through the wires of the cage.  They proved, miraculously, to be undamaged, but to this day Mary Beth can sometimes be heard to mutter "A monkey stole my glasses" and then break out laughing.  Just this evening when I phoned her and said my blog would discuss zoo stories, she chortled that very phrase. The behavior of animals in zoos is quite remarkable.  A keeper once wrote about an experiment in which putting a screwdriver on the floor of the cages of the great apes vividly demonstrated the difference between them.  The gorillas were afraid of the screwdriver, avoiding it with suspicion or chest-pounding in defiance of the intruding tool.  Conversely, the chimpanzees were fascinated, picking up the screwdriver and, in the words of the zookeeper, "using it for every possible purpose except the one it was made for."  But when the screwdriver was placed in the orangutan cage, it promptly disappeared.  The next day the cage was empty and the former tenants had to be hunted down and returned.  "The orangs," the keeper explained, "are the escape artists of the animal kingdom."

At the Cincinnati Zoo some years ago a keeper was killed when she accidentally walked into the tiger exhibit, mistakenly thinking it was empty.  There was an immediate outcry from the public demanding that the tiger who jumped her be put to death, but the official in charge of the zoo adamantly refused.  "We're not going to kill a tiger merely for being a tiger," he explained.  That seems absolutely right to me.  However, when a Canadian goose (strangely violating the natural tendency of Canadian geese to land only in appropriate places) recently touched down in the polar bear exhibit at the Columbus Zoo and, sadly, came to a bad end, no one in the public seemed to object at all.