Chaucer, The Miller's Tale, and Me


To earn a degree in English at the University of Maryland (from which I graduated in 1965), one requirement was to take a "development of language" course (of which there were a number of possibilities).  The majority of these sounded dreadful, judging from the catalogue descriptions ("Elements of Grammar," for example), but the course that caught my eye was "Chaucer in the Original English."  Since Geoffrey Chaucer was born in 1343 (I was born in 1943, six hundred years later), his version of the English language is only a kissing cousin to modern English.  The professor who taught the course (whose name, alas, I cannot recall) was a treasure: a true Chaucer enthusiast with a love of his subject, and an infectious way of reading the old English out loud with enthusiasm.  On the first day of class he told the thirty or so students that we would take turns reading aloud from Chaucer's various works.  The text was arranged so that on one page would be Chaucer's original language and on the facing page would be the modern day translation.  Most of these readings were from Chaucer's masterpiece "The Canterbury Tales" (in which the various pilgrims on their way to Canterbury Cathedral each tell a tale), but there were other works such as "Parlement of Fouls," describing a convocation of birds.  Here is the start of the original prologue to "The Canterbury Tales" and then one of the many modern translations.  Try reading the original out loud after you've read the translation, and then consider doing so in a classroom.


Whan that Aprill with his shoures soote
The droghte of March hath perced to the roote,
And bathed every veyne in swich licour
Of which vertu engendred is the flour,
Whan Zephirus eek with his sweete breeth
Inspired hath in every holt and heeth
The tendre croppes, and the yonge sonne
Hath in the Ram his halve cours yronne,
And smale foweles maken melodye,
That slepen al the nyght with open ye
(so priketh hem Nature in hir corages),
Thanne longen folk to goon on pilgrimages . . . .

When April with his showers sweet with fruit
The drought of March has pierced unto the root
And bathed each vein with liquor that has power
To generate therein and sire the flower;
When Zephyr also has, with his sweet breath,
Quickened again, in every holt and heath,
The tender shoots and buds, and the young sun
Into the Ram one half his course has run,
And many little birds make melody
That sleep through all the night with open eye
(So Nature pricks them on to ramp and rage)-
Then do folk long to go on pilgrimage . . . .

That first day of class the professor himself read us a good portion of the Prologue, and then assigned a couple of students to read to us in the following class.  But after that he called on students at random.  Most so chosen were daunted by the task, and it was often hard to listen to them stumble through their recitations.  Some students, of course, were better than others, and all improved as the semester progressed.  As for me, I loved preparing for class and faithfully practiced reading Chaucer's words aloud.  About halfway through the course the professor called on me, and—ham that I am—I plunged into the text with brio.  His face lit up with pleasure, and thereafter I was frequently called upon to recite, which I did with pleasure.  I'd been an actor since I was small boy, and that sort of background is just what Chaucer requires to bring his tales alive.  It was a particular pleasure to be chosen to read aloud "The Miller's Tale," though I worked hard at not blushing when doing so.  If you're going to have to say outrageous things, then do it in an outrageous manner, and everyone will have a good time.

A few words about "The Miller's Tale."  Unlike the other tales, which range from a story of courtly love ("The Knight's Tale") to exploration of various aspects of society ("The Wife of Bath's Tale" treats the relationship of men and women), the tale told by the miller is over-the-top, extremely bawdy, and very funny.  As I describe it for you, consider that this famous story from the late 1400's  has never been televised and never could be televised (except on HBO-like channels where X-rated situations and nudity are permitted).   If you're a high school teacher and assign your class "The Miller's Tale," you'll be looking for a job shortly thereafter.

Nicholas, an astrology student, has become sexually attracted to Alison, the young wife of John, a carpenter (and Nicholas's landlord).  To consummate their passion the would-be lovers must find a way to get alone, so Nicholas tells John that a flood like Noah's is coming:

"Now John," quod Nicholas, "I wol nat lye;
I have yfounde in myn astrologye,
As I have looked in the moone bright,
That now a Monday next, at quarter nyght,
Shal falle a reyn, and that so wilde and wood
That half so greet was nevere Noes flood.
This world," he seyde, "in lasse than an hour
Shal al be dreynt, so hidous is the shour.
Thus shal mankynde drenche, and lese hir lyf." 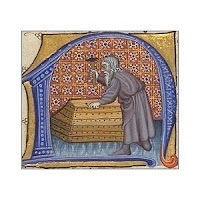 To avoid this deluge, Nicholas, Alison, and John build three wooden tubs and suspend them from the rafters. On the designated night, they climb in and sleep in the tubs. During the night, Nicholas and Alison climb down, make love, and then hear outside the serenade of Absolon, a foppish parish clerk, who's in love with Alison. He begs her to put her cheek up to the privy window (through which people relieved themselves) so he can kiss her, but she sticks her butt there instead and farts in his face when he attempts the kiss. Outraged, Absolon stalks over the blacksmith's shop and borrows a red hot poker. He returns, asks for another kiss, and when Nicholas, chuckling, now offers his bum, rams the poker home. When Nicholas, in great agony, yelps "WATER!", John the carpenter awakes in his tub, thinks the flood is raging below, cuts himself loose, and breaks his arm in the resulting fall.

Try televising that.  Most of the tales are not this outrageous, but I confess that I never think of "The Miller's Tale" without smiling and wondering at what a rogue Chaucer was all those centuries ago.


In addition to developing an appreciation of the works of Geoffrey Chaucer, I did learn something about the early history of the English language from this splendid course.  Indeed, I was amazed to discover that Chaucer, just like Shakespeare two centuries later, gave us hundreds of words that are now commonplace.  These include: accident, border, box, funeral, horizon, nod, observe, princess, rumor, scissors, superstitious, theater, universe, village, and wallet.