One of my very best friends is Tim Ihle, who was a law student in 1976 when I joined the Ohio State law faculty in January of that year as a Visiting Professor for the winter and spring quarters.  Things had become heated at Indiana University Indianapolis Law School, which was my permanent home, where the previous December I'd made a motion to censure the Dean for outrageous conduct and then led the faculty, more or less en masse, into his office the next day to tell him he must resign.  He declined.  When I left the next month to be a visitor at Ohio State until the summer, I was certainly hoping they would make me a permanent offer.  I was also, as explained in previous posts, exploring being a gay man for the first time.  At the Columbus gay bars I, of course, encountered the OSU gay law students, and they were very helpful in teaching me the ways of the homosexual world as it existed in 1976.  Tim was among this crowd, and we became fast friends for a number of reasons, especially including the fact that he was one of the creators of my record album "Strange Songs," where he kept stealing the limelight with numbers such as "The Specialty of the House."


I was told by the OSU law faculty, unanimously, that there was no way I would be offered a permanent position—in the changing legal education world of that day most law schools, OSU included, were simply not hiring white males.  [One of the most liberal members of the faculty told me years later that had he known I was gay, he'd have voted for me!]  I was saved, and did receive and accept the permanent offer, because the graduating class of 1976 (blessings upon them) voted me the Outstanding Professor of the Year (which annoyed some other faculty members since I was both a visitor and had been only there for five months).


Subsequently Tim graduated from law school in 1979 and went to work for one of the most prestigious firms in Columbus.  One Monday morning in 1982 he came into work and the secretaries informed him he was about to be fired because the partners had discovered he was gay!  This turned out to be an accurate prediction—they told him to clean out his desk by Friday.  This same firm had had an embezzler who they gave six months to find a new job, but a gay associate was too much for them in those homophobic days.  Tim was devastated.  The Steven Sondheim song in which one of the lyrics is that "bricks can fall out of clear blue skies," was written for moments like this.


About the same time I'd accepted an offer from the University of California Hastings Law School (a free-standing law school in downtown San Francisco) to be a Visiting Professor for the 1982-83 school year.  What gay man (then single) could resist and offer like that?  Tim approached me and asked if he could share expenses with me for that year, with the two of us being roommates while he took the California bar and found himself a new job.  Delighted, I said yes, and the adventure began for us both.  Understand that we were not a romantic couple, but just good friends embarking on a new experience together. 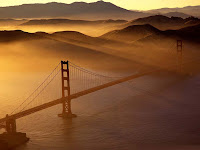 Tim went first to SF and rented us an apartment on Laguna Street at the top of Pacific Heights across from Lafayette Park.  It had a tremendous view of the city—just breathtaking.  From one of the windows you could see the Golden Gate bridge, and when the fog would come rolling in every evening it was spooky and unreal, much like a bad special effect in a movie.  Lafayette Park is beautiful, but the grade in climbing it up to our apartment was 45° (no exaggeration).  Since you can't park anywhere in the city, you must get around by walking, taxi, cable car, or bus.  The first twenty times or so that I struggled up that grade carrying groceries I thought it was all sort of enchanting, but then it began to occur to me that it would be easier to be back in Columbus when in need of groceries, having only to hop in the car for a quick trip to Krogers.  Getting to work was easy—all downhill.  But coming home required use of some sort of public transportation, which could be a pain.  The law school was located at the edge of the Tenderloin, a bad section of town, and I frequently had to step over bodies of drunks on the sidewalk or deal with panhandlers.  Someone once well said that you are permitted to love two cities: your own and San Francisco.  That's true, and I did and do love SF, but I confess that I quickly realized I was often battling the city, and came back to Columbus in the summer of 1983 with an appreciation I'd not previously had for how easy it was to live there.

When I arrived in SF it was a Sunday, and Tim greeted me happily and we went out to explore the neighborhood.  I asked him if the liquor stores were open on a Sunday, and he confessed he didn't know.  A quick exploration of nearby Polk Street revealed an open package store, and Tim grinned broadly as he commented how nice it was to find a city that had its priorities straight.  Over the next ten months we explored much of the city, everything from its fabled sights (Twin Peaks, the Coit Tower, Alcatraz, etc.) to its wonderful gay life (the bars in particular, which had a stunning range from drag, to wet t-shirt, to bikers, to leather, to classy and expensive), and great theater (local companies did marvelous things, as well as major Broadway touring shows, powerful gay productions, and extravaganzas like Beach Blanket Babylon, with its wonderful oversize hats).  Gay areas of town, such as the Castro or South of Market, were particularly fascinating since seeing gay men and lesbians happy in a non-threatening environment was remarkable for the early 80's.  Tim and I went to the first Gay Games (they were forbidden the name "Gay Olympics" by a Supreme Court decision), took in the SF Opera (where some gay men attended in full leather!), and also visited the wine country and other nearby cities like San Jose.  We made friends and entertained visitors from out of town.  We loved it.

The weather in SF is fascinating, being mild most of the year.  Strangely, however, the summers can be quite chilly, causing Mark Twain to once remark that the "coldest winter I ever spent was a summer in San Francisco."  Wikipedia explains: "Among major U.S. cities, San Francisco has the coldest daily mean, maximum, and minimum temperatures for June, July and August.  During the summer, rising hot air in California's interior valleys creates a low pressure area that draws winds from the North Pacific High through the Golden Gate, which creates the city's characteristic cool winds and fog."  All during the year in SF people have trouble deciding what to wear.  I've seen a woman in a heavy fur coat standing next to a panting jogger in t-shirt and shorts, both waiting for a light to change, as if they had somehow been magically teleported from different climates to this street corner.


It was fun being in a neighborhood with fancy residences, many of them with gay populations.  We quickly learned the local establishments that were best for food, sundries, liquor, books, etc.  One nearby doughnut shop proved to be our undoing.  On a weekend morning the thought of those hot and delicious doughnuts would often pull me from my bed.  By the time I returned, Tim would have made coffee, and our weekend would get off to a great start.  As I put on some pounds, I joined a local gay gym, which proved to be . . . interesting.  During that year there were sexual adventures too, of course, but I'm not going to report on that here other than to say that I had a very good time.  AIDS was just beginning to make its appearance in the early 1980s, and many people were rightly scared—no one knew what it was or how to deal with it.  When I spent a week in San Francisco ten years later I went back to one of my favorite bars and found it almost empty at a time when it used to be packed.  When I asked a bartender "Where is everyone?" he replied in all seriousness, "They all died."  That was a sobering moment.