The Legacy of Homophobia

August 02, 2011
Consider the Southern Senators in the middle of the last century who loudly opposed civil rights for all, using ugly terms for African Americans and their supporters.  Did it occur to them that they were writing themselves into the history books as bigotry personified?  In an unsuccessful efforts to block the Civil Rights Act of 1957, South Carolina's Senator Strom Thurmond led the longest filibuster in Senate history (among other things in his 24+ hour rant he read aloud every state's election law in alphabetical order and recited his grandmother's biscuit recipes), while failing to acknowledge he was the father of  an illegitimate African American daughter.   Would he and the others like him have cared that their names nowadays are synonymous with hypocrisy?

There are penalties for bigotry, whether private or public, and eventually these people are an embarrassment to all who knew them or learn about them.  The history books shame their legacy.

Now take the current crop of public homophobes, a number of whom are candidates for the Republican Presidential nomination.  Former Senator Pennsylvania Rick Santorum vehemently opposes gay marriage, and was once quoted as saying, "If the Supreme Court says that you have the right to consensual sex within your home, then you have the right to bigamy, you have the right to polygamy, you have the right to incest, you have the right to adultery. You have the right to anything."  Minnesota Congresswoman Michele Bachmann is also much opposed to gay marriage, and her husband runs a Christian Clinic that supposedly turns gays into straights.  At one point in her career she made this comment: "Any of you who have members of your family that are in the lifestyle—we have a member of our family that is. This is not funny. It's a very sad life. It's part of Satan, I think, to say this is 'gay'. It's anything but gay. . . .  It's profoundly sad to recognize that almost all, if not all, individuals who have gone into the lifestyle have been abused at one time in their life, either by a male or by a female. There's been profound hurt and profound things that have happened in almost all of their lives."  Both have signed an anti-gay marriage pledge as part of the current campaign.


Now I ask you: do you think either of these candidates has a realistic chance of attracting enough voters to actually become President of the United States?  What are they thinking?  The answer is that they're only interested in the voters who agree with their hatred, a dwindling number, and, like the Southern Senators mentioned above, in the end will finish as historical embarrassments, their homophobic statements (and other missteps) clouding their legacy forever, ugly and inexcusable.


This all came home to me in 2005 when I reconnected with a man I went to law school with who has since become a major player in a Southern State Senate.  Let's call him "John Smith."  He was my roommate for the first semester of law school, but, for personal reasons, dropped out after that semester.  I thought he was a nice guy, fun to be with, and was sad when he left school.  Later I was pleased to learn he had gone back to a different law school and graduated.  When I practiced law in Chicago in the late 60's, John came for a visit, but then I lost track of my old friend.  Consider my surprise when I learned that the leading Senator in the State of ______ was John Smith, and his big campaign was to get that state to pass a constitutional amendment forbidding recognition of gay marriages.  Sure it was him (for various reasons I won't go into), I hunted up his email address online and sent him an email entitled "Douglas Whaley, Does That Name Ring a Bell?"  He promptly (and delightedly) replied that it did ring a bell and asked me how I was doing.  I sent back a description of my life as a law professor, but didn't mention my gay activism.  John's emailed response described his law practice, political career, marriage late in life, and his two college age sons.  Now that we had reconnected, I sent him this:
-------------------------------------------------------
John:


What follows is the portion of my history that I omitted from my last email.

I was reared as homophobic as everyone else of our generation (I was a Catholic altar boy back in the days when the mass was said in Latin).  I spent a lot of energy on sexual encounters with women, designed to convince myself that I was heterosexual.  At age 32 I finally talked truth to myself, dumped my homophobia, and came out.  This was 1976, just as I started a visiting Professorship at Ohio State (where I was offered a permanent position, and from which I retired last year).  It was heady period, and an enormous relief to allow myself to be myself.  It freed me from all that self-hatred and wasted time pretending to be another person.  Eventually I found not only freedom, but happiness, and even love.

I also became very angry at what society did to gay people.  This anger fueled political involvement, and I helped organize the gay community in central Ohio in the early 80s.  I am now, to my amazement, known as one of the elders of the gay rights movement in this state.

Imagine then, my distress, at seeing an article in The Advocate (the gay community’s version of Time magazine) mentioning that you were the sponsor of your State Senate's version of DOMA.

Okay, I have a question for you:

Surely I am not the only gay person you know (almost everyone in this country has gay relatives, co-workers, neighbors, friends).  What would you have your gay constituents do about their gayness?  Do you think that if only they prayed harder, went to the right therapist, or really, really tried, they could all become happy heterosexuals?

I know that this must be a hard issue for any legislator to deal with, and a political nightmare that is not going to vanish anytime soon.  I would be fascinated to hear what you have to say on the topic.

And I remain an old friend of yours.

John Smith wrote back that of course he knew a lot of gay people both as friends (his wife is an interior decorator) and constituents.  But he added that he must  represent what the vast majority of his constituents want, which is of course to keep marriage between one man and one woman.


My emailed response was that his reply was well and good as far as it went, but surely it's the job of leaders to lead and not just follow current opinions, particularly when they're bad for the represented community.  I then made an appeal to history.  I pointed out that if today's high school students could vote, gay marriage would a reality, and that within twenty years the whole controversy will seem silly.  By then it will be obvious that gay people should be treated like everyone else, and those who had said something different in the past would be pitied or vilified.  I ended with this:

"John, if I were in your position, here's what I'd worry about every night when I put my head on my pillow—I'd wonder if my grandchildren are someday going compare what I did to those southern senators who battled racial civil rights fifty years ago.  I'd fear my grandchildren would be hugely embarrassed by what their grandfather did when he had power in the state legislature, and they'd avoid talking about me whenever my name came up."

Well, by golly, John never replied to that email!  But perhaps his anti-gay crusade slowed down some, and I'll bet I caused him a sleepless night or two.

After all, he currently doesn't have any grandchildren yet. 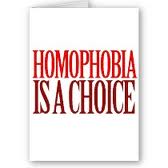