June 20, 2011
Are you the sort of person who likes challenging intellectual games? If so, the best game in the world is calling you to learn to play bridge. Why is bridge the best game in the world? Because it combines a basic card game with complex rules, an artificial bidding system that can be as complicated as you want to make it (including adding your own inventions), a play of the cards requiring concentrated analysis and application of skill, all of this combined with the fact that you and your partner must be in perfect sync to make it all work. Daunting? Sure? But rewarding, even at a the beginner's level? Oh yes. Take a few lessons at your local bridge center and you'll be hooked for life. Pick up the hand in the photo below and you can take all the tricks (a "Grand Slam").
﻿﻿﻿
Alas, this wonderful game is dying out. Why is that? The truth is that it was once very popular, but when young people discovered video games and other entertainment possibilities, the quaintness of card games became passé, and so, alas, the bridge-playing population is aging. At one tournament in Cleveland there was a twelve year-old boy playing. He'd been taught the game by his parents, and he was a very good player, but it occurred to me that it was almost cruel to teach him to play. Who will be play with him as he ages? The saving answer might be in cyberspace. The game is alive and well on the internet, where I'm told it's much like the Wild West. You are paired with partners in far-flung parts of the globe (one of my Columbus friends routinely plays with Turks, someone in South Africa, or is randomly paired with a partner in who-knows-what country), and the usual conventions are flouted with abandon, making for some hair-raising games. Actually, bridge is in the process of being tamed on the internet, where there are now respectable tournaments and permanent partnerships forming (sometimes with partners who will never meet in person).

There's a huge difference between party bridge (which is very social and typically played by people who aren't very good at the game) and duplicate bridge (used at bridge clubs and tournaments). In duplicate games the cards are dealt out into four hands (13 cards each) and then each hand is placed into slots in a little metal tray (called a "board"), and given a number (Board #1, for example). Each slot is labeled with a direction of the compass (North and South versus East and West). The players sit down at a table, all four pull out their cards from the board, sort them, and the game begins. When this board is played, the result is put on a tally (how well did North/South do compared with East/West?). After playing few such boards, the East/West pair gets up and moves on to play another set of boards with a different North/South pair at a different table. At the end of the evening the winners are determined by which North/South pairs played their cards the best versus other North/South players (and the same for the East/West pairs). Thus it really matters little whether your pair happened to have had good cards or not, the major question is how you played your cards compared with the other pairs holding the same ones. This removes much of the luck factor from the game, meaning that the best pairs tend to win over and over, always a hallmark of a good game.

I started playing bridge when I was in high school and then played in some minor tournament games while in college. When Charleyne and I married in the summer of 1971, we were both in our twenties and realized we had no idea what to do with much of our free time. Since Char had also played some bridge in high school and college, we took advantage of the happy fact that there was a local bridge center just a mile from our home in Indianapolis. It was called the Blackwood Bridge Center, and it offered two duplicate bridge games every day (one in the afternoon, one in the evening). So we decided to try playing there.
﻿
What we didn't know was the "Blackwood" in the title was the famous bridge expert Easley Blackwood, the inventor of the most used bridge bidding convention in the world, and this club was run by him and his wife. Wow! For Charleyne and me it was like diving into a pool of sharks. What we should have done (and what I recommend to you) is sign up for bridge lessons, and that would have eased us into the game. But, stubbornly, we are both autodidacts (people who like to teach themselves), so we bought books and practiced a lot a home, while getting routinely bloodied by the BBC crowd (who were great people, but dangerous opponents). At the end of the first year, however, Charleyne and I were entering tournaments (playing in the beginner's sections) and even winning them (a great thrill!). It was the start of a lifetime of duplicate bridge that continues to this day. Charleyne and I even managed to play as partners for a year or two after our marriage ended in 1976, finally quitting when it became too difficult to get together to play (she was in still Indianapolis, but I had moved to Columbus). I should also mention that playing with your spouse has to have certain set rules ("Your marriage must not depend on what you lead," "No discussion of hands is permitted on the ride home unless both of you agree," "No frowning when your partner makes a really stupid bid," etc.).

When you first start you will play in beginner games, and progress upward from there. At whatever level you reach, including international competitions, there are always teams better than you are, so don't worry about that. The thrill is in mastering this terrific and challenging game at whatever level you currently inhabit. You will hunger for more. 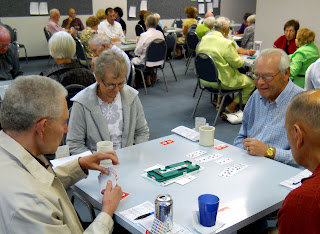 Once Charleyne and I quit playing, I more or less abandoned bridge during my teaching years (it can be addictive), but once I retired from the Ohio State Law School in 2004, I went back to playing duplicate bridge on a regular basis. My current partner is James Griffith, with whom I have also acted in a local community production (which is where we met). He's a great guy, a much better player than I am, and very tolerant of my frequent fumbles. We currently play every Thursday night at the Franklin Bridge Club here in Columbus, which is possibly the oldest bridge club in the country. In the photo, Jim and I have won the bidding, at which point the first person on the winning team to have bid the winning suit plays the hand while his partner (now called, unflatteringly, the "dummy") lays his cards down on the table and follows instructions from his partner at to what cards to play (which is what Jim is doing in the picture).

If you decide to investigate this fascinating game, Google up "bridge center" along with your town's name, and then call the bridge center and ask if lessons are available (they will be). If you don't have a partner, they'll find you one. Bridge people are, by and large, very accommodating and always welcoming people who want to learn the best game in the world.

Be one of them and enter into an experience that will change your life. I promise you that's true.