June 03, 2011
As I've explained before in this blog [see Related Posts below], my father Robert Whaley dreamed of being a lawyer since he was a little boy. However World War II sent him into the Air Force, and the necessity of keeping a family (and his own considerable skills as a pilot and squadron commander) kept him there. In 1949 he was tranferred to St. Louis University where he taught ROTC for two years. Interestingly, St. Louis offered an evening law school, and Dad, excited, promptly signed up. He loved taking the courses, and by the time he was transferred two years later, he'd amassed 40 credit hour and was second in his class.

Fast forward to 1967. I was about to graduate from the University of Texas Law School the following spring, and Dad, age 49, was retiring from the Air Force at the rank of Lieutenant Colonel. He told me that he was going to sell real estate or insurance, but mostly just play golf with my mother. I vetoed that immediately. "Nonsense, you're going back to law school" I told him. He looked both shocked and pleased, and I persuaded him to take the Law School Admissions Test, on which he made a respectable score. Next I went to the main office at the UT Law School, and had an interesting conference with the Associate Dean, who I knew, and the school decided to admit him. Texas gave him full credit for his St. Louis courses, and, indeed, wouldn't even let him take some of those basic subjects over again (even though, for example, constitutional law had changed dramatically between 1949 and 1968---the Warren era!).

Dad was very leery of returning to school so late in life, and knew he would feel out of place . . . a retired Air Force Lieutenant sitting in class with lots of very liberal hippies (mixed with very conservative Texans as well). One of my mother's sisters, Gerry LeMastus, happened to be visiting my parents at this time, and her youngest son, James ("Bo") was about to start kindergarten. Dad explained to Bo that he was nervous about this new adventure and asked how Bo felt about kindergarten. Bo shrugged and replied, "Well, we're signed up, so I guess we gotta go!". That made Dad laugh, and Bo's reply became his mantra.

Of course, his worries were unfounded---he loved being back in law school. Okay, he quickly wearied of being Doug Whaley's father (as in, "Aren't you Doug Whaley's father?"), but Robert Whaley was personable, intelligent, very experienced, and deeply interested in how law really works. He was also possibly the most charming man on the planet, and soon had lots of friends among his classmates. One day a strange young man sat down next to him in class,wearing a suit and tie, hair cut short, very spiffy. When Dad looked at him oddly, the man smiled and asked, "Bob, don't you recognize me?" It was one of his hippy friends, who confessed he'd lost a bet with his father and had cut off all his hair and dress up. No one knew him.

Law is taught through a Socratic dialogue (question and answer), and Dad entered into these exchanges with brio. One of his favorite professors for such sparring was the great Charles Allan Wright. 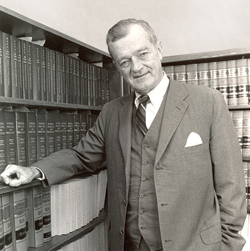 A few words about this incredible man. The intimidating Professor Wright was the leading constitutional law expert of his day, President Nixon's lawyer during some of the Watergate affair, and a determined eccentric. He dressed in a three piece suit, with taps on his shoes, plus a watch fob and chain. He carried nothing into the classroom except a seating chart, but referred his casebook by page numbers and often mentioned famous cases, including their official citation numbers, using his prodidous memory alone. He refused to call on the few women students then attending the University of Texas Law School, because he thought the Socratic dialogue was embarrassing to them (this later caused him some trouble). He famously coached an intermural football team called the "Legal Eagles," and the rumor was that members of the team would not be called on in class if the team was winning---so these students would sit there bloodied and bandaged, but smug.﻿

I was Professor Wright's student in a "Federal Courts" class, and the first day he was having trouble getting a discussion going. It was a huge group of over a hundred students, seated alphabetically, and I was with the "W" segment in an upper corner. One of his questions caused me to shake my head, and he swiveled, pointed at me, and asked my name. I gulped, managed to remember it, and even reply when he asked me why I thought the answer was no. That set off an interrogation that not only lasted much of the class, but carried on sporadically throughout the semester. In all of law school I never prepared so hard for class as Wright's, and made a very good grade. When I was first being considered for appointment as an Assistant Professor at Indiana, I was asked if Charles Alan Wright would give me a letter of recommendation. With some trepidation I asked him, and he kindly did so. Then a year later he sent me an invitation to the Texas cocktail party at an annual law prof convention, addressing it to "Doug" and signing it "Charlie." To this day I can't remember if I had the courage to call him "Charlie" in return.

Dad, of course, was unintimidated by this giant, and their classroom exchanges became the talk of the school. Later Dad told me he dropped by Professor Wright's office one afternoon for a friendly visit, and told Wright that among other things he much admired his mastery of the "show business" of teaching (remember Dad had himself taught at the college level). Dad said that Wright smiled happily at this compliment until Dad added, "except for one thing," at which point Wright's face "collapsed like venetian blinds slamming shut." He asked Dad what supposedly marred his performance, and Dad replied that it was the seating chart he lugged into class. This made Wright laugh, and he confessed that he used to memorize it but had unfortunately gotten lazy in recent years.
﻿﻿
Dad graduated in 1970, immediately passed the Texas Bar Exam, and was made an Assistant Prosecutor in the Dallas County District Court, run by the famous Henry Wade (he of "Roe v. Wade"). Though Robert Whaley started in the misdemeanor courts, his considerable talents soon made him a leading prosecutor, head of the "Career Criminal Division" (going after, for example, the Mafia). Dad's photo hangs in the office one of the Justices of Texas's Court of Criminal Appeals (highest criminal court in the state) because the Justice tracked me down some years ago after Dad had died and asked for it, saying "Bob Whaley taught me everything I know about criminal law."