June 17, 2011
In my life I've thrown some strange parties, a few of which have been described previously on this blog, but surely one of the oddest was the April 20, 1985 Puppet Party. Jerry and I had begun our twelve year relationship that previous January, so this was probably our first social event with my closest friends: Art and Lorri Greenbaum-Latek, Mary Bush, Ann Matheson, Barbara Shipek, Lynn Brown, and a few others. The conceit of the party was this: everyone was to furnish his/her own puppet, and only the puppets were invited to the party. The puppet owners had to come, of course, but were not allowed to talk as real people; only the puppets could speak to one another. This was a party for puppets only.
﻿
Amazingly, this nuttiness worked very well, and everyone entered into the spirit of the event with great brio. There was good food, lots of drinking, and (I suspect, but don't specifically remember) probably some marijuana to help a few of the puppets relax. Lorri, ever creative, hand-made puppets for herself and Art that looked just like them (she told me recently she ran across these puppets when cleaning out a little-used closet). My puppet was Sesame Street's Grover (since I could do his voice), Jerry's was a wolf, Mary's a bird, etc.

The puppets played games too. There was "Pin the Tail on the Donkey," with the puppets being blindfolded (but—note—not the humans). Somehow none of the puppets managed to correctly pin the tail on the appropriate part of the donkey diagram (see photo of Lorri's puppet pinning the tail up near the donkey's ear). There was a ring toss game (see photo of Mary's bird missing its first throw), and a game of hide and seek. In the latter, the puppets hid, while the attached human beings were in full view, but the players understood that the human were to be invisible, so the seeker had to find the hidden puppets without the clue given by the lurking human near the hiding place (see photo below of Mary being discovered atop the refrigerator by Art). 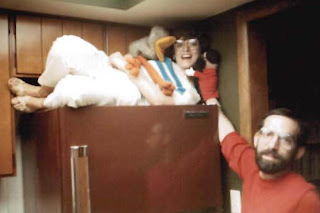 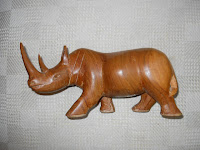 The highlight of the evening was a re-creation of the story of the Wizard of Oz, with the puppets playing the familiar characters. We lacked a Toto, so I appropriated a hand-carved wooden rhinoceros I'd purchased in San Francisco (ten inches long, beautiful carving, very lifelike, carved in Kenya), and he became Toto. In the photo below, Lynn's Emerald City Gatekeeper is denying entrance to the usual Oz travelers (note Toto hanging just above sofa in middle of the picture).


After the party some of the puppets made phone calls or sent thank-you notes to say it was the best puppet party they'd ever attended. Okay, it was crazy, but great fun. In future posts I'll tell you about some of the other festive get-togethers: the potluck where everyone had to bring a dish that needed utensils to eat (like spaghetti), but which had to be consumed with hands alone (quite a mess before that evening was done), the oddest of the playreadings, my 60th birthday party where skits were performed on a make-shift stage in the garage and the first public singing ever of "Big Birthday" occurred (while I wept over my lost youth), etc.