October 11, 2010
I was born on September 25, 1943 (right in the middle of World War II), which means I’d been Christmas conceived. In truth, my parents had a story about the Christmas Eve of 1942. Robert and LeNore Whaley were at some friend’s house, and a cute little three year old girl was running around, charming everyone. On their way home (after, perhaps, an alcoholic drink or two) one of my parents said to the other, “Their daughter was so cute—how about we have a baby?” The other must have thought it was a good idea because nine months later to the day, Douglas John Whaley was born.

The place was Huntingburg, Indiana (in the southern part of the state). My parents were both from Jasper, Indiana, some four miles away, but Huntingburg had Stork Hospital where they elected to have me (Dad’s parents lived there). It was named after its founder, a Doctor Stork (I’m not making this up), and he delivered me. Yes, that’s right! I was brought into this world by a Stork.

Actually, Robert Whaley (on leave from his WWII post in Panama) had no great opinion of Dr. Stork, who was leaving the building just as Mom was going into labor. “Where are you going?” Dad asked, grabbing the doctor by the arm as Dad and his very pregnant wife were rushing in. “Need to run home,” the doctor replied briskly, but Dad was having none of that and bullied the man into staying.

Not long thereafter Dr. Stork took Dad aside and told him that Mom’s labor was a very difficult and dangerous one, and that the choice had come down to saving the mother or saving the baby. In later years, recounting this story, Dad’s face would still contort with the agony of that moment. He knew what he had to say. “It’s no decision at all,” he told the doctor after thinking about this ugly election. “Save my wife first, but for God’s sake, if you possibly can, save the baby too!” Dr. Stork sadly replied he didn’t think that was possible. Later he told Dad he decided to force the birth by squeezing the baby’s skull and brutally pulling it out, thus risking killing it, but as he started to do so the baby was born naturally and erupted from the womb. Supposedly I dropped onto the floor (which would explain a lot), but in all probability that’s an urban legend (or a Bob Whaley exaggeration—he wasn’t present so, I ask myself in 2010, how could he know what went on during delivery?).

I was immediately taken back to Jasper, and, surrounded by relatives on both sides (particularly my Catholic mother’s very large family), was given much love (see this photo of my first Christmas; I remember playing with that foreground elephant, named—what else in 1943?—Dumbo ).

I’d like to say that I was a quiet, model child, but stories I’ve heard from my parents and others don’t, alas, reach that conclusion. Mom informed me more than once that I was five years old before they had a picture of me with my mouth closed (see photo below). 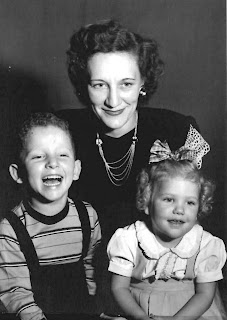 When I’d just turned three in the fall of 1946, we were living in Independence, Kansas, where Dad was then stationed. One of our babysitters attended Independence High School, and for some unknown reason she took me to a journalism class. A clipping from a local newspaper says that I “made such a hit with everyone that [Doug] is now a member of the senior high Girls Pep Club, the mascot, of course, and . . . will attend all of the school parades and senior high school games. He is the son of Captain Bob Whaley.” That, and similar newspaper human-interest stories, caused Mom to mutter, “Doesn’t that kid have a mother?” 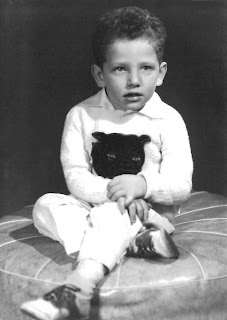 A different newspaper clipping, accompanied by a photo of me wearing the Independence High School Bulldogs cheerleading uniform, had this to say:

“Not lacking in initiative, he always keeps the situation well in hand. During one of the football games toward the end of the season, when the weather was close to freezing, Doug was left on the bench buried in coats and blankets while the cheerleaders went across the field to greet the visiting pep club. The local pep club became excited and began yelling without leaders. Doug squirmed out of the blankets, dragged one of the megaphones with him, and complete with actions and all, surprised the crowd by leading the club in a yell.”

Apparently I was the crown bearer at the coronation of that year’s home coming queen, and, after the homecoming king kissed her, I insisted on doing the same.

After that, as you know, I grew up and became the shy, quiet person I am today.