October 30, 2010
Jerry and I had a wonderful relationship for twelve years: full of love and adventure and a constant enjoyment in each other’s company (see “Recidivist: A Criminal Who Does It Again,” September 10, 2010). Our personalities melded well together, complementing our talents, and we had a terrific romance. But in 1997, after a series of various difficulties having nothing to do with the two of us, it became clear that Jerry needed to start a completely new life for himself in another city. As a tenured full professor at The Ohio State University College of Law, I was rooted to Columbus like a tree that had been growing there for over twenty years—going with him was not an option. His problems did not stem from a souring of our relationship in any way, and I supported him in all that was happening until the very end. We had almost a full year’s warning that his best course would be to leave Ohio, and so we approached the last day with heavy hearts, but also as much enjoyment we could manage in a difficult time. Immediately before Jerry’s departure we took a five day vacation jaunt to New York City, and saw shows, went out for nightlife, visited friends, etc. I think it's a rare couple who could do that with the knowledge they were breaking up immediately.  We returned on a Sunday, Jerry packed up his car on that Monday, and, after we had lunch on Tuesday, April 29th, Jerry said, “I love you---goodbye,” kissed me, and drove off, heading west, his destination uncertain.

I cannot tell you how hard that was.

Even though I’d been preparing myself mentally for this moment for a full year, its intensity took me by surprise. I found myself pacing around the house, yelling “Damn! Damn! Damn!,” which scared the parakeets and didn’t help at all. So I made myself sit down, take deep breaths, and think as logically as possible how to get through the lonely days that lay ahead.

While Jerry and I had been in New York it was exam time back at the law school, and my Consumer Law students had taken their final exam (three hours---essay), which was waiting for me down at the law school. “I’ll keep busy,” I told myself. “I’ll scoot down to the school, pick up my exams, and start grading immediately!” This was a really dumb idea, and I knew it, but I was desperate. A stack of exam bluebooks should not be graded immediately but instead must be allowed age, like wine or cheese, until they can ripen into really good exams. But I hopped in the car, drove to the law school, bustled about as if nothing were wrong, picked up the exams, and brought them home. I installed myself in my favorite reclining chair and actually began to read one of the exams. But, of course, I couldn’t concentrate, the page blurred beyond comprehension, and I quickly tossed the exam across the room. Another series of “Damn!”s ensued.

I began muttering out loud, “I am not going to just sit here, cry, feel sorry for myself, worry about Jerry, or do something ridiculous like have a couple of drinks in the early afternoon.” Okay, but what else then? I was 53 years old, suddenly alone in a life that had almost constantly been lived with someone else, feeling ancient. Would anyone ever be interested in Old Doug again? Would I die alone, unloved? Relationships in the gay male world are no easier than in the straight world, and have the added complication that gay men are often first judged by physical appearance (I’ll explain why in some future post). I’d always had a vigorous workout routine, and was in fairly good shape, but, as just said, I was 53 (!) and suddenly felt older.

Jerry seemed to be in every room. It occurred to me that while he had his own agony to deal with, in one way Jerry had it easier than I did: he was off on a new adventure (and Jerry always loved a challenge), while I was stuck in the old existence with a big hole right in its middle.

“I know!” I said aloud, coming up with a plan. “I’ll get my social life going, call some friends and schedule things, maybe even set up a date in a month or so!” I thought about that. A date? Humm. If I had my druthers, who, of all the men I knew, would I most like to go to supper with? 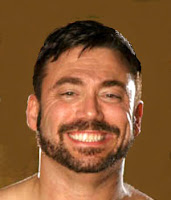 The answer was obvious: Mick Powers. Mick was a casual friend Jerry and I knew from various gay events, and, oh yes, he was a major hunk: square-jaw, great smile, Hollywood handsome, very muscular, fun to be with, in his 30s (he’s done some professional modeling). I had no idea if Mick might be interested in having dinner with me some day, but nothing ventured, nothing gained. I knew that he was the manager of a video rental store downtown, so I looked up the number and called the store. By happy coincidence, Mick answered the phone himself. “Hi, Doug,” he said cheerily when I identified myself, “how are you?” “Mick,” I replied, “did you know that Jerry and I broke up?” (I didn’t, of course, mention how very recently this had happened.) “No! Wow! You guys were together a long time,” he commented, sympathizing. “Yes,” I said, “but I’m trying to get my social life going again, and I wondered if you would like to go out to supper with me sometime in the future.” “Sure, Doug, but how about instead of a meal, we go to a movie—you know what a movie buff I am!” I agreed to that, but was unprepared for his next sentence: “Good. Let’s meet tonight at the Lennox Megaplex at 9 p.m. and pick a flick.”

I was stunned. I yanked the phone away from my ear as if it were hot, and just stared at it, flummoxed. After a moment I heard Mick say, “Doug? You there?”

Why the hell not? I thought in a savage rush. It was a much better idea than crying steadily the rest of the day. So, sounding as normal as possible, I told Mick I’d like that, and we agreed to meet in the main theater lobby at nine.

I put down the phone in a very different mood than I’d picked it up. Mick Powers was a dream man of mine, so this all didn’t seem possible, didn’t seem real. What had I done? Was I sorry I'd done it? Should I call and cancel? NO, NO, NO! Instead I went down to the basement and did my normal workout: 30 pushups, 30 deep knee bends, 30 sit-ups, 45 minutes on the Universal Gym Machine, and then jogging a mile. At eight that evening I showered, put on my black jeans, leather boots, tight black t-shirt, and drove down to the movie theater.

It was crowded and, in spite of it being exam time, filled with my law students, who (given how I was dressed and my bizarre situation) I was unprepared to meet. “Professor Whaley!” they gushed, introducing me to their dates, asking what movie I was going to see, even posing a last minute question or two about my other exam coming up on Friday. It was a nightmare, but Mick Powers arrived and I was able to escape from the students. He asked what movie I preferred and I left it up to him. He chose “Romy and Michele’s High School Reunion.” It turned out to be an awful movie no one should ever have to sit through, but with Mick’s huge bicep leaning against me all during the picture, I barely noticed the plot. It was eleven o’clock when we exited the theater, and even though he’d earlier mentioned he had to open his store at eight the next morning, I found myself asking him if he’d be interested in coming back to my house. Twinkle in his eye, Mick said, “Yes, Doug, I’d like that.”

Two hours later, at my home, as Mick was leaving he gave me a big hug. “You are one sexy man,” he told me with a wink, and then left to get what sleep he could before going to work.

Sometimes, just when you need it, life deals you a really good card. The next day I woke up, and the extraordinary pain of Jerry being gone hit me like a physical force. It was a bad day, and filled with lots of tears and self pity (at one point both birds, never having seen me cry before, flew to my shoulder and nuzzled my neck, which made me cry all the harder). Jerry and my heartache were all I could think about.