October 06, 2010
I’ve told any number of stories about my biological family, and now it’s time to tell some about my chosen family here in Columbus, Ohio. For the last 30 years, I’ve been welcomed into the warmth of a new family with whom I celebrate the holidays, birthdays, playreadings, sports events, outings of many kinds, and yearlong love. Depending on how you count them, there are around eight people in this chosen family, each of them characters, each with stories of their own. 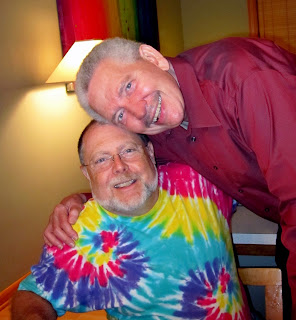 I’ll start with the most recent member, one of my best friends in the world, Tom, who married into the family in 1995 when he and Ann (who I met in the early 1980s) tied the knot, a second marriage for both of them. There are any number of possible posts about Tom, who’s intelligent, funny, brimming with personality, over-the-top by choice, and all together among the finest people on the planet. I’ll start with a juxtaposition of two of them: a lovely story and a not-so-lovely one.
When Tom was married the first time, his then wife brought into the marriage her deaf and retarded child,  James. Tom promptly learned sign language and was a splendid father to this small boy. Tom and his wife did have a child of their own, Aaron (the nephew I took to Las Vegas in August when he turned 21, and who was mentioned in “Mary Beth and the Gay Teddy Bear” post of September 25, 2010), now a handsome young man in college. But here’s the interesting part: when Tom’s marriage ended not only did he get custody of Aaron, but he took James with him and raised him to adulthood. Think about what an enormous heart a person must have if, during the pain of the collapse of a marriage, he not only walks away with his own son, but also James, a boy with tremendous needs, not biologically related at all! Years later when I asked Tom why he did this, he shrugged and said, “It would have been irresponsible to leave James where he was since his mother wasn’t capable of taking care of him.” 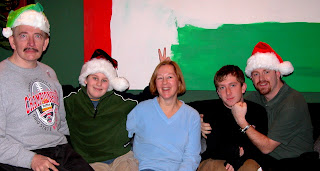 So James (now in his 30s) is a beloved member of our chosen family. He lives in a home that assists adult people with special needs in having as ordinary a life as possible, and holds down two jobs (one, for example, involves stocking groceries). James is much fun to be with, and to clown with, and is often at my house for football or basketball games on TV. Our family communicates with him by body English or via Tom, Aaron, or Tom’s wife Ann, all of whom know sign language. The photo shows some of the family at a 2004 Xmas dinner; from left: me, Lee (Ann and Tom’s son), Ann, Aaron, and James.
The last story involves Tom, me, basketball, and things that catch our eyes at the games. Before retirement, as a faculty member at Ohio State University I regularly obtained season tickets to both football and basketball games. Tom is an OSU basketball fanatic (and I mean fanatic—he drives poor Ann and others, including me, crazy during basketball season with more or less constant discourse about the Buckeyes and their basketball prowess). Before my heart started failing we went to many a game together (say thirty or more through the years), struggling through winter snow to root the team on to victory (see photo). Those we couldn’t attend we’d often watch on TV. 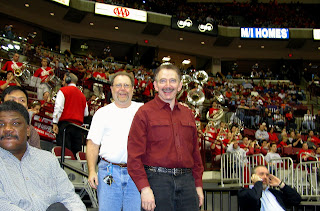 Men being men, we’d sometimes comment to one another about the beauty of members of the crowd or players and others around us. Tom’s eye was caught by young slim women, frequently blond or Asian. I, on the other hand, have always been attracted by muscular men, particularly bodybuilders, and prefer they be forty or older. As a running joke one of us would nudge the other and, pointing, say “You might be interested in that one over there.” We were amused at how easily each of us could spot someone who would likely be eye candy for the other.
Finally this came to a test. There was a quasi-professional basketball league starting up here in the Midwest and Columbus formed a team. Tom and I, along with a good friend of his named John, decided to attend one of these games (held at a high school gym). When the three of us were sitting in the stands, I told John about Tom and my ability to predict which people the other would find attractive.  To our surprise, John promptly challenged us to do it. Tom and I looked at each other, he raised an eyebrow as a question mark, I nodded, and the challenge was accepted.


I had an easy time of it. There were six young female cheerleaders, and one of them was an attractive, slim Asian, so I pointed in her direction and told John, “We have a winner.” John looked at Tom, who smiled and agreed. “Okay,” John said to Tom, “you’re next. Who’s Doug’s type?” Tom, brow furrowed, gazed around. The basketball players were mostly slim, and not overly muscular. They were dentists or office workers by day and basketball players only when they could find the spare time. The crowd was all bundled up in heavy coats, and hard to judge. The cheerleaders were female. Worried, Tom finally turned to me and asked, “Is there someone?” “Oh, yes,” I replied. “Great looking man.” Working harder at it, Tom renewed his surveillance of the room. Suddenly he smiled. “Oh!” he said, “of course! The referee!” 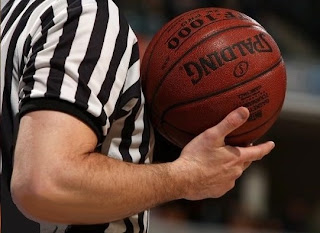 Tom was right. The man was a hunk.