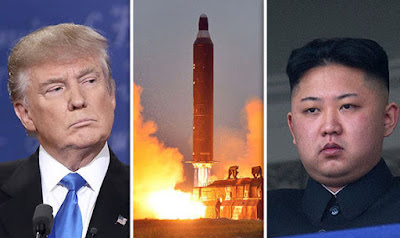 Looking back on World War II it is almost incomprehensible how someone like Adolph Hitler could have persuaded the German people to embrace his madness.  And, minor student of history that I am, I’ve often wondered that it really happened.  I’m half German (my mother’s side) and the Germans are a very practical people, rooted in reality, dedicated to making things work.  How could they have become so accommodating to evil to elect that awful government into power and then allowed it to thrive until it almost conquered the globe with its deadly choices?  Certainly, this madness, so demonstrably wrong, couldn’t happen again, and particularly not in an age where information is available at the touch of a phone pad and facts are widely spread so that truth is obvious to anyone paying attention to the issues. 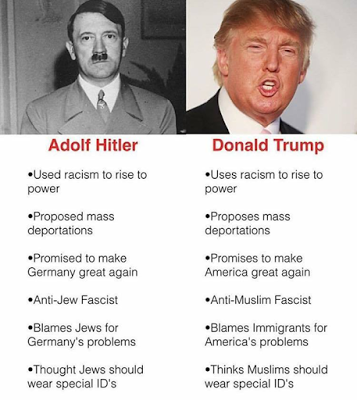 Then came the election of Donald Trump and now I nightly slump in my chair at the renewed madness loosed upon a world that gapes at his crudeness as he, smirking from the edge of the precipice, tweet by tweet, pushes us over, perfectly willing for us all to fall with the rest of civilization as long as it’s the greatest plunge of them all! 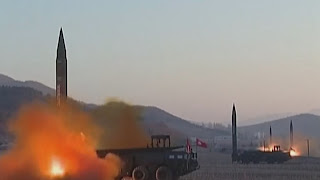 Matching this madness on the other side of the world is an infant with comic book hair in charge of North Korea’s nuclear time bomb, a boy whose ego and instability mirrors Trump misstep by misstep: Kim Jong Un.  His priorities are not to help his starving people, nor to care for them in any way at all.  Instead of domestic leadership he wants world domination, and he has the weapons to make this goal a serious threat.  His recent ballistic missile tests can plant nuclear bombs on any part of the United States he wishes to annihilate.  Our experts (on last night’s news) say that North Korea still has some technical details to work out before this mission could be successfully accomplished.  How comforting!  A few technical tweaks and then a giant mushroom cloud will blossom directly over downtown Chicago. 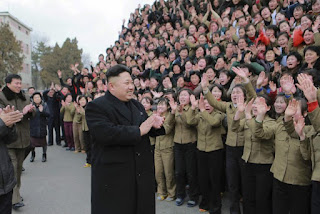 I have been listening to the audiobook called “The Accusation” by a North Korean using the pseudonym “Bandi.”  The book, smuggled out of North Korea, contains six short stories each depicting a different horror of current life in that dismal country.  They are so hard to listen to (even though very well told and quite enthralling) that I’ve ground to a halt after the first three, almost afraid to continue.  In one, a woman who gets into a dispute with her neighbors in Pyongyang ends up being sent to a concentration camp because her small child laughs inappropriately at a giant picture of the North Korean leader, leading them both to be convicted (without trial) of “insufficient fervor” for the glorious ruler.  In another a man meets a similar fate for trying to visit his dying mother without having the right travel papers (only available to those with money enough to bribe the appropriate officials). One story after another gives new depth and meaning to the word “depressing.”  It is horrible to think that any people must live like this.  For North Koreans outside the model city of Pyongyang (where disabled people are banned), starvation is the chief problem.  Those who manage to flee the country do so at the expense of loved ones left behind, who will be jailed or murdered as punishment for the exodus of their kin.  When Kim Jong Un turns on one of his advisors (like his uncle, shortly after Kim took over) that man is publicly executed and then his body thrown to pigs to eat; http://www.mirror.co.uk/news/weird-news/revealed-kim-jong-uns-top-5688931.  Kim Jong Un’s half brother (one with an arguably better right to lead the country than Kim) was murdered in another country in an airport by two young girls smearing his face with poison, his death being almost instantaneous.  It sounds like I’m making this up.  I’m not.

We can be grateful, I suppose, that so far at least our president doesn’t have the latitude to dispose of those he dislikes so efficiently.  Oh, but surely Trump, if he had these powers, wouldn’t use them to dispose of those who displease him.  Surely not.

This week these two loonies are on the verge of setting off big bombs.  To write that sentence is scary.  It too sounds like hyperbole, but few people reading it would think that’s actually the case.  In the latest bombastic exchange between Trump and Kim, Kim first bragged that he had a nuclear button right on his desk.  Trump immediately replied that he had an even bigger button on his (an exaggeration—he only has a nuclear football which has to be programmed). 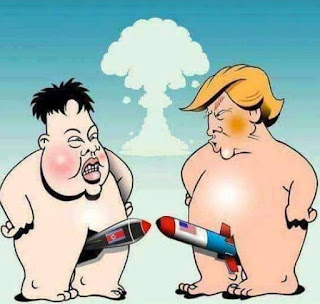 This schoolboy braggadocio would be funny or merely boring except for the terrifying fact that each truly has such destructive power, each is unstable, and each has the unfettered ability to push that button without having to get the permission of anyone else.  What?  Of course dictator Kim has that power, but Trump?  Doesn’t our president have to clear a nuclear attack with some person or some agency?  Nope.  I’ve explained this before.  Most people think there are checks and balances that would require such a decision to have a consensus among governmental officials, but that’s just wrong.  The whole system these days is set up for “rapid response,” and it’s totally up to the president to choose that response.  Under relevant law Donald Trump is the only person who can launch the nuclear bombs.  He is required to consult with two military officers, but they cannot change or interfere with his ultimate decision to bomb or not to bomb.  If he gives the order, the bombs will go off where he points them.

Even worse is that North Korea just agreed to have talks with South Korea to calm things down, and a judicious president would have taken the opportunity to massage that possibility with the hope that nuclear war can be made unlikely.  After an initial response saying this sounded like a good idea, Donald Trump immediately entered into the “my button is bigger than yours” exchange with Kim.  Both of these loonies react before thinking, and neither can stand the thought of being taunted or bullied by anyone else.  This would be merely annoying if they didn’t have those buttons within easy reach, but I am not alone in worrying that one or the other (or both) will find himself—perhaps reluctantly, perhaps with glee—pushing that button before 2018 is over.  Now tell me you’re not worried about that same thing. 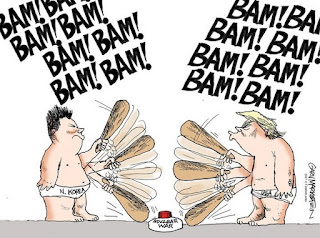 What can be done?  Well, one thing would be for Congress to act and put some limitation on the ability of the president to start a nuclear war.  Perhaps it would be as easy as adding the necessity for the cooperation of another government official.  Who?  Well, probably not the vice president, since he/she would usually be under the control of the president.  Same problem with members of the cabinet or the military.  I would suggest choosing a member of Congress, and the Speaker of the House comes to mind as an appropriate person.  I am no fan of Paul Ryan, but he is an intelligent man and would not lightly agree to push the big button and start a nuclear war.   Certainly having Paul Ryan’s required cooperation in any launch of nuclear missiles is much better than leaving the decision to Donald John Trump alone.

Kim Jong Un is a mad man.  Donald Trump has traits that lead many experts to say that he too has major mental problems, particularly when it comes to the issue of self control.  These two irresponsible men are playing chicken with the future of world.

Trump’s tweet-ending “Sad” isn’t close to being as big a word as we need to describe the horrors to come if something isn’t done to curb his power to wipe out the nation that so foolishly entrusted him with its future. 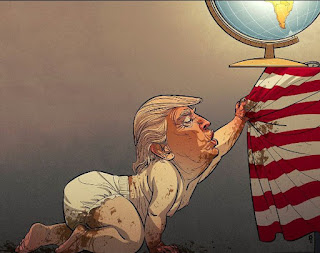