A New and Valuable Word for Your Vocabulary: “UNC” [“Under No Circumsances”] 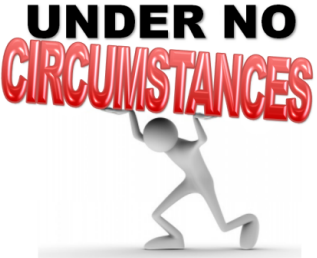 When my husband David and I visited my son, Clayton Whaley, and his wife Maria, in the Seattle, Washington, area this past summer, at one point we were all standing in their kitchen and Maria playfully suggested something to Clayton as a possible thing he should do and he replied without hesitation, “That’s an UNC.”  [It rhymes with "dunk."]  David and I both laughed.  Who knew?  My son and daughter-in-law use “UNC” too!  Clayton must have gotten it from me, and, happily this very useful meme has now been handed off to a new generation.  I was very pleased.


The initials mean “Under No Circumstances,” and are used whenever what has just been proposed has no chance of happening if the speaker has any control over the situation.

It comes up often, for example, when David and I are sitting in a movie theater watching previews prior to the showing of the feature film.  Some film previews, of course, highlight movies we will likely see, and we make a mental or verbal note to do so.  But others are so warningly horrible that one or the other of us will mutter aloud, “UNC,” instantly banishing the offender to unviewed hell. 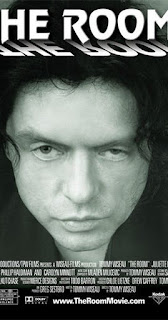 There are many traditional ways of expressing this same thought: “Never in a thousand years,” “Over my dead body!”, or (in a similar funereal vein) “I’d die first,” etc.  But these time-tested phrases required multiple words.  “UNC’ is brutally short, efficiently dismissive.  Further, should it catch on, the cognoscenti will be strangely satisfied by its abrupt, contemptuous finality.  The speaker is freed from further discussion.  Appeals are usually futile and much discouraged. 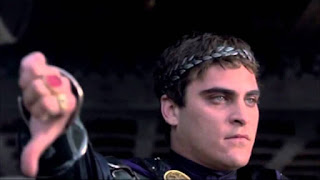 I’ve written before about other solutions allowing me to move things along at an efficient pace.  In one blog post I described my frequent usage of the phrase “I’ve ceased to care,” appropriate when deciding I now know all I want to know about whatever is being described—similar to (but not the same as) “Too much information”; ­­­­­­­­­­­­­­­­­­­­“A New Motto: ‘I’ve Ceased To Care,’” December 31, 2015;http://douglaswhaley.blogspot.com/2015/12/a-new-motto-ive-ceased-to-care.html.  In another post I explained how I have avoided thousands of hours of TV commercials by DVRing everything I plan to watch and then skipping through programs to avoid commercials and other interference so as to view only the salient parts; “How To Make Television Your Slave and Not Your Master,” July 20, 2017; https://douglaswhaley.blogspot.com/2017/07/how-to-make-television-your-slave-and.html.

My life is filled with such shorthanded phrases and practices, and my friends, family, students, and, of course, poor David, are exposed to them all.  Many of these phrases or practices are inherited from my father, Robert Whaley [see “The Sayings of Robert Whaley,” May 13, 2010;
http://douglaswhaley.blogspot.com/2010/05/sayings-of-robert-whaley.html], and, the best of these, “One more and quit forever” (used in connection with the question whether or not to have another drink of alcohol) has spread from Dad’s first utterance to various parts of the country where people he knew and their friends now reside.  My ex-wife Charleyne says it, Clayton and Maria also, dozens of people in Columbus, Ohio, can quote it, and Dallas, Texas, where he lived for ten years at the end of his life is filled with devotees.    For Christmas one year, David gave me a plaque of this saying, and it hangs in a place of honor in our kitchen, visible from the living room where I can simply point to it whenever offering guests a refill of their drink. 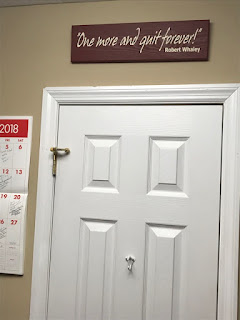 “UNC” is the opposite of “One More and Quit Forever.”  No renewal is allowed.  The UNCed item is immediately banished from the speaker’s universe and pre-UNC harmony is restored.  This accomplished it’s probably time for that drink. “How To Make Television Your Slave and Not Your Master,” July 20, 2017; https://douglaswhaley.blogspot.com/2017/07/how-to-make-television-your-slave-and.html