Impeaching Donald Trump: A Lawyer Looks at the Legal Issues 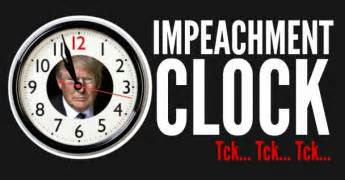 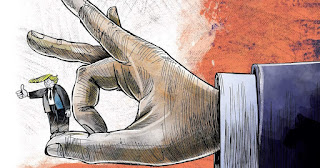 First let’s be clear that the word “impeached” does not mean “thrown out of office” as many people assume.  Three of our presidents have been impeached but none of them have been thrown out of office as a result.  The word “impeached” as used in our Constitution has the same meaning as “indicted” in criminal law.  Under Article 1 of the United States Constitution the House of Representatives has the sole power of impeachment, but this only means that the House must decide there are sufficient grounds for removal from office.  If so the same Article gives the Senate the power to try the case, presided over by the Chief Justice of the United States Supreme Court (currently John Roberts), where a vote of two-thirds of the senators in favor of that action is required for conviction.  Removal from federal office is the only penalty.  Any actual crimes would have to be separately prosecuted in the usual criminal courts.

The Constitution gives the following grounds for impeachment and conviction in Article II, section 4: “Treason, Bribery, or other high Crimes and Misdemeanors.”  Treason and bribery are obvious enough, but what are “high crimes and misdemeanors”?  Ah, there’s the rub, as Shakespeare would say, and that question has bedeviled our three attempts to impeach a president.  There have been other federal officials (usually federal judges) impeached for a variety of offenses , but those cases have had little sway in the presidential impeachments.

Let’s look at the presidential impeachments one by one. 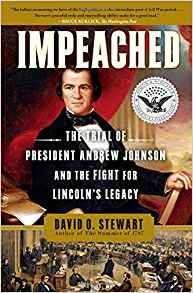 The first one, of course, was Andrew Johnson, and his impeachment has been wonderfully described in great detail in a recent new book that I just finished reading:  “Impeached: The Trial of Andrew Johnson and the Fight for Lincoln’s Legacy” by David O. Stewart.  When I first picked the book up I thought it would be heavy slogging to get through it, but I was wrong.  It was fascinating, starting with a detailed discussion of Andrew Johnson’s drunken speech in 1865 as he was being sworn in as Lincoln’s second Vice President just months before Lincoln was assassinated.  Johnson, amazingly, was a Democrat suddenly serving in a Republican administration and a Southerner (from Tennessee) now running the country that had just put down a Southern rebellion.  Lincoln had hoped that choosing Johnson as his new Vice President for the second term would encourage a healing of wounds and the reconstruction of the country as the Civil War ended.  But once sworn in as president Johnson promptly returned to his roots and restored the defeated Southern officials to their prior positions in their home states and helped them make sure that the newly-freed blacks were kept in something like slavery, most importantly kept from being able to vote in elections.  The Republicans, with an overwhelming majority in Congress and in those days very liberal (to the point where they were known as the “Radical” Republicans) were outraged and kept passing statutes to restore blacks to full citizenship while ousting those Johnson had restored to office, only to have Johnson veto the statutes, followed quickly by Congress passing them again by huge margins that overrode the vetoes.  Things got very bad and there was talk of a new Civil War.

Johnson tried to fire his own Secretary of War and appoint someone else, and in theory this violated a federal statute then on the books (though there was major arguments that this was either not a violation or that said statute was unconstitutional).  Along with other trumped up charges, including that Johnson was unfit to serve as president (“abuse of power”), the House voted a total of eleven articles of impeachment and trial was had in the Senate, presided over by Chief Justice Salmon P. Chase.  Senatorial votes going either way were arguably swayed by bribes, and the trial lasted months before Johnson was acquitted by just one Senatorial vote.  His four year term was up months later and Ulysses S. Grant, war hero, was elected president.

The major problem with this impeachment that caused its failure was that Johnson had not clearly committed an impeachable offense: “Treason, Bribery, or other high Crimes and Misdemeanors.”  In Stewart’s book his conclusion is that it’s impossible to throw a United State President out of office simply because he’s a bad president.  Instead there has to be a serious crime.  Stewart adds that such a conviction is much easier when the opposition party has an overwhelming majority in both the House and the Senate. 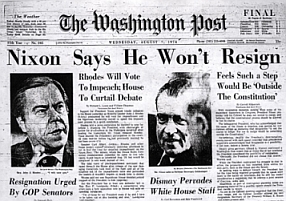 In the 1970s it became clear that Richard Nixon had committed major crimes in connection with the famous Watergate burglary and cover-up thereof, and the House of Representatives, in much televised proceedings, held public hearings and began voting on various articles for his impeachment.  During a hurried visit to the Oval Office by Senator Barry Goldwater and other Senators the president was informed that conviction was almost certain in the Senate.  Nixon, trapped, resigned his office (our only president to do so).  His Vice President, Gerald Ford, after taking the helm made one of his first presidential acts the pardoning of Nixon for all crimes, known or unknown.  This was a very controversial act (though clearly legal—as Donald Trump knows from his recent study of the broad presidential power to pardon), but many Americans (me among them) were so sick of the whole Watergate mess that the country grumbled, sighed, and promptly got back to a more normal state of things—precisely what Ford desired.

Bill Clinton was very unpopular with a lot of Republicans in Congress, and this led to an investigation of his involvement in an business enterprise called Whitewater.  While that was going on Clinton was sued by a woman who contended he had sexually harassed her.  Quickly thereafter Clinton’s affair with a White House intern named Monica Lewinsky was revealed, and then scandal ruled the headlines.  There was an argument that Clinton had lied during the sexual harassment trial, and, since that would be perjury, the House voted to impeach him in late 1998.  But Clinton was a very popular president (unlike both Nixon and Johnson) and neither of the impeachment articles received even a majority vote in favor of conviction, much less the two-thirds that would have been necessary to pitch him from office.

This brings us to Donald John Trump.  In just the first seven months of his four year term he proved himself to be totally wrong for the job, and things are getting dramatically worse.  Every night in our household when we turn on the evening news we take in a deep breath and hold hands tightly, alarmed at what new folly our President might be committing and pondering whether it will just lead to more bad press or to something much more serious—such as bombs going off all over our trembling planet.

I’ve written much on this blog about what a disaster Trump is (see Related Posts below), and you’ll get no argument from me that we’d all be better off with him gone.  People say, “Well, but then you’d get Pence as president!”  Yes, and I dislike Pence greatly, but Michael Pence is not bat-shit crazy.  He does not want bombs going off.  Sure, I suspect Pence would be a bad president, but, hell, we’ve had lots of bad presidents in our history.  Give me Pence as President of the United States tonight and I’ll put my feet up, have a martini, and be a much happier man.

From all of the above there emerges this clear guideline: before Donald Trump could be impeached by the House (controlled by Republicans) and convicted by a two-thirds vote of Senators in a trial (also controlled by Republicans), he would have to clearly be guilty of a major crime.  Not a little crime; a big one.  Without that impeachment has no chance of succeeding.

But buck up, Trump detractors!  There’s a good chance the Donald has committed or will commit just such a crime.  Concentrate on establishing that.  That current investigation into his administration’s dealing with the Russians, for example, is quite interesting.  Hmm. 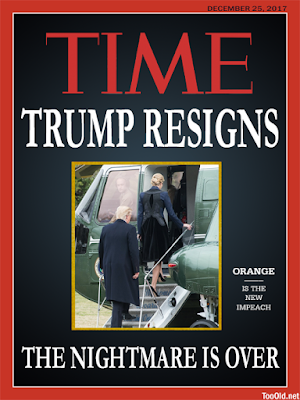 In some ways a high bar for impeachment is a good idea.  In the United States we do not impeach a president merely because he is bad at his job in the eyes of the current Congress.  Were that not true we’d have had many more impeachments than the few described above.  In such a world we’d have something like the British system where a vote of “no confidence” by the legislature leads to a new election right away.  If you like this British system, fine.  But know that implementing it would take an amendment to our Constitution, a process that itself is very difficult to navigate successfully. 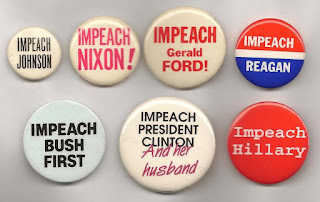 “Calm Yourself: What Trump Can and Cannot Do About LGBT Rights,” November 16, 2016; http://douglaswhaley.blogspot.com/2016/11/calm-yourself-what-trump-can-and-cannot_16.html

“Careful What You Wish For: Making Trump an Illegitimate President,” January 20, 2017; http://douglaswhaley.blogspot.com/2017/01/careful-what-you-wish-for-making-trump.html