The Grand Duchess Abigail Abramova: Royalty in the Personage of a New Cat Deigns To Appear in Our Humble Home 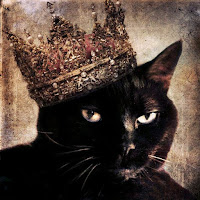 As readers of this blog may know, my husband David and I have two cats: Mama and Barney, both rescued from the wild, and each with amazing stories—for example, Mama Cat once saved my life, no exaggeration [see Related Posts below].  Neither one of us had had much experience with cats in our earlier lives, but we’ve learned fast.  Mama and Barney have been with me since shortly after my heart transplant in 2009, and David and I have been living with them together for over three years.

Mama is scary smart (we have to spell words like “food” in front of her, and we suspect she’s beginning to figure that out) and Barney, though small of brains, is very lovable.  He adores us both, but particularly David, who’s patsy enough to succumb to Barney’s loving bats on the nose each morning around sun-up when David, laughing, rises to feed the cats.

Our happy home life changed dramatically last fall when I viewed a Facebook feed in which a kindly woman explained that you should always have three cats.  The reason was that if one dies the survivors can comfort one another if there are two, but the survivor will suffer in solo grief if only one is left.  This led me to propose to David, who (admittedly) was dubious, that we should acquire another cat, so we soon went to Colony Cats (a rescue operation near us, where I had acquired Barney in 2010), and, after various maneuvers, purchased a very black female cat with very soft fur who came to us already answering to the name of “Abby.”  She’d been owned by little old lady who’d had to enter a nursing home and, sadly, give Abby up for possible adoption.

Abby’s label on her cage said that she was “Scared of dogs, but good with other cats.”  I don’t know the truth of the dogs part, but she hissed at poor Mama and Barney from the first moments last October when she arrived until this very morning.

In truth, it seems there’s been a mistake.  Abby is, alas, not an ordinary cat.  Oh, no.  She is in fact the Grand Duchess Abigail Abramova, Russian royalty mysteriously transported to Columbus, Ohio, and forced to battle impossible surroundings, not at all like the palace of her native land.
Barney, ever a go-along-get-along sort of guy, isn’t much of a problem, and the Grand Duchess dismisses him with a flick of her tail, so he (usually) cowers appropriately if she deigns to give him a minor snarl.  The bane of her life, and a major problem, is the other female, the hated “Mama,” who presumes—get this— to rule this household, inexplicably incapable of understanding her humble place in life.  This has led, appallingly from Abby’s point of view, to two declawed cats rolling in fierce battle across the floor while bigger mammals jump about, yelling at them to break it up, damn it!

After a couple of months of this, a silent peace treaty between the females has been dickered.  In truth, lately these battles seem more like play than serious combat.  At meals Mama and Abby are, happily, “sisters” begging the big mammals (usually David) to feed them, and both are as cute as kittens while achieving this mutual (and damned important) goal.  But, as Oscar Wilde observed in his comedy “The Importance of Being Earnest,” women only call each other “sister” after they’ve called each other a number of other names first.  For the rest of the time they ignore each other, with minimal growls, bored with the conflict and willing to settle for something like a peace treaty.


As for Abby’s relationship with the humans, it’s been very much like that of any Grand Duchess forced into contact with the lower classes (“Don’t know you, don’t know you, don’t know you”).  David’s birthday is in late December so I presented him cards from each of the cats.  Mama compared him to capnip in her affections, and Barney confessed that he couldn’t remember David’s name but nonetheless adored him with all his heart.  Abby’s card was much darker.  It was black themed, and was addressed to “Peasant Number One.”  [I am Peasant Number Two.]  It assured him that when he stopped feeding her he would die. 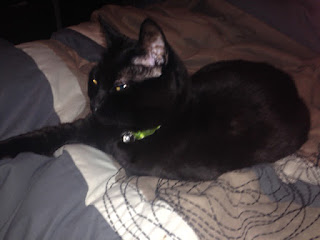 Ah, but I have discovered another side to the Grand Duchess Abigail Abramova [David’s name for her].

Here I have to brag.  I’ve always had some talent at getting into the brains of those I deal with, which had made me a successful teacher, and helped with things like acting, playing bridge, hosting parties, having conversations, and even more intimate matters [see my blog post “Good Sex, Bad Sex: Advice on Making Love; http://douglaswhaley.blogspot.com/2011/11/good-sex-bad-sex-advice-on-making-love.html].  When petting cats I try to view the activity from the cat’s point of view, and I enjoy exploring what can happen after a cat first trusts you and then lets you pet him/her in ways no one else ever has done (such as slowly touching the inner ear, or gathering up the neck by the scruff the way mothers carry kittens, or slowly massaging their paws).  I experimented first on Mama, and she loved it, and so did Barney, so I tried it on Abby and was very surprised.

Okay, at first Her Highness felt very uncomfortable in letting an unwashed peasant touch her, but (it must be confessed) she did miss the gentle petting the little old lady gave her, so she reluctantly endured my advances.  After days of the usual sort of petting, Abby was surprised by what it feels like to have a human just barely touch your body when you want more, and then to feel a strong touch, and then a finger moving all around your ear, and then grabbing your neck by the scruff, and well . . . eventually even a royal cat just has to give in and expose her belly to rubbing, while purring for more.  Lady Chatterley had a good time with that gardener. 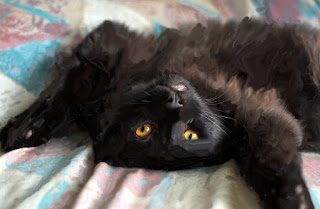 And thus it came to be that the Grand Duchess Abigail Abramova has become a gentler cat, and a much happier member of our family.  She’s had to give up some of her royal demeanor, but we’ve introduced her to other delights: exploration of the garage, the mysterious red dot that bounces all around the room, and more, particularly catnip, which turns her into a kitten.

Below is a photo of all three cats asleep on the bed. 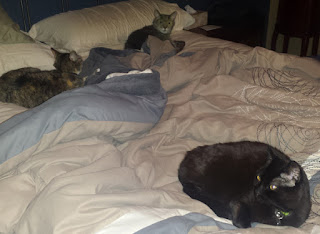 We are a family again at last, and we have royalty in our midst.

“How To Impress People In a Conversation,” October 10, 2010; http://douglaswhaley.blogspot.com/2010/10/how-to-impress-people-in-conversation.html