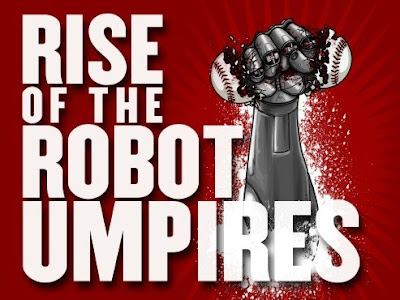 Yes, robots are taking over more and more jobs these days, and we—the luddites—mightily protest in vain.  But there are some tasks, important to us, where robots will do things much better than humans ever can, and for such tasks we should welcome the efficiency these mechanical helpers bring.


Using AI to replace the job of baseball’s home plate umpire to call pitches as balls or strikes is an obvious example.

I am a major baseball fan, watching close to a hundred games a year (almost all of them being my beloved Cubbies—see Related Posts below).  In recent years most televised games show us a graphic of the strike zone and whether, according to the computer, the pitched ball actually touched it or not.  The real life umpire cannot see this graphic and continues to call balls and strikes in the old fashioned way: giving his best estimate of whether the ball was actually in the strike zone.  Professional umpires are trained well and they are pretty good at getting it right.  But the AI umpire is always perfect at getting it right and its embarrassing how often the umpire is simply wrong (sometimes dramatically so).  I estimate the live umpire gets the call wrong about 12% of the time.  In baseball that’s a lot of mistaken calls. 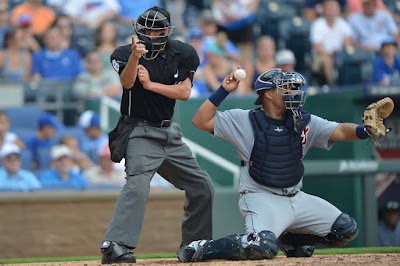 When an umpire is wrong you can bet that he hears about it after the game from many sources: the offended baseball player (whether batter or pitcher), disgusted fans, his employer, friends, family, or, worst of all, watching a video of the game and actually seeing how bad his call was.

There has been a movement underway, which I’m joining now, to have AI umpires call all balls and strikes.  Just recently one of the minor leagues has been experimenting with doing this and the results are positive.  See http://www.wfmj.com/story/40774097/robot-umpires-debut-in-independent-atlantic-league.  This experiment determined that the artificial umpire called more strikes in the upper part of the strike zone than human umpires are comfortable doing, and that the strike zone seems bigger to everyone playing because if even a sliver of the ball touches it a strike call results.  In this experiment the human umpire was wearing an ear piece and instantly heard the robotic decision.  It was his duty to then announce the result aloud.  The human umpire can only overrule the AI umpire if something strange happened like the ball was pitched badly, bounced in front of the plate, and then crossed the strike zone (being called a strike by the robot umpire when the rule books would not do that).

The strike zone varies with each batter based on his height.  As to height the zone goes from the middle of his knees up to most of his belly (“nipples to knees” is the joking way of explaining this).  The professional players are all measured for this to ensure accuracy, or, if no measurement has yet been taken of a new player, the standard strike zone for a man of his height is substituted.  The size of home plate is the horizontal measurement of the strike zone (see below). 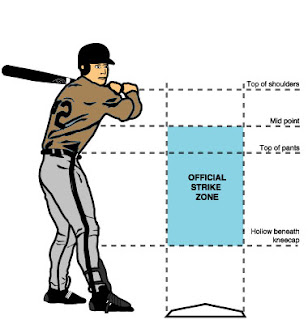 The AI umpire makes a 3D measurement of the plate and the height of the player to create the artificial strike zone.  If the ball touches any portion of the strike zone so created a strike is called.  On television most broadcasts only show a rectangle of the strike zone viewed from the front and an image of a circle where the ball went as it was pitched into or out of the rectangle.  Normally this rectangle is added to the screen off to the side of the actual players at home plate, but on some (bad) broadcasts the rectangle is put right over home plate where it is harder to see because the image is obscured by the three players in the picture.  The best use of the AI umpire in on ESPN where the entire 3D image is often shown. 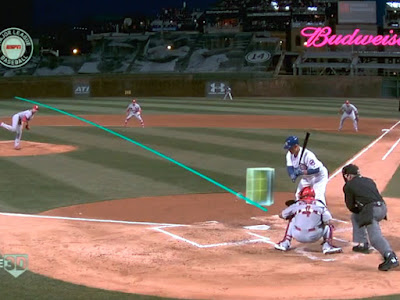 When I began asking very experienced baseball viewers whether they favored taking the human umpire out of the strike zone decision in favor of the AI calling the game, I received diverse answers.  Those who chose to stay with the current system had explanations like “it’s always been part of the game, and players have to get used to the vagaries of the different umpires.”  “Wouldn’t that favor older players who happened to be good at this over newer ones or those who are bad at remembering whether particular umpires have large or small strike zones?” I asked.  “Yes, but that’s always the case: some players are just better at understanding the game than others.”

Hmm.  After the experiment with the AI umpire in a minor league game mentioned in the link above most of the players, both pitchers and batters, liked the use of the AI umpire over a real one and said they wished it was done all the time.

I’m with them.  When I’m watching a game and I see bad calls being made that critically affect the outcome of the game I’m annoyed that the obvious fix isn’t implemented now.  Baseball games should be decided by what actually happened and not by merely guessing.