My Sad Tale of Being a Chicago Cubs Fan

I grew up in a sports family [see “My Competitive Parents” at http://douglaswhaley.blogspot.com/2010/01/my-competitive-parents.html] and to this day watch a lot of sports [“On Being a Gay Sports Fan” at http://douglaswhaley.blogspot.com/2012/03/on-being-gay-sports-fan.html].  When I was newly out of law school and in my mid-twenties I moved to Chicago and, in my spare time, often went out to Wrigley Field to see the Chicago Cubs play.  This was a great time for watching a fabled group of Cubs: third baseman Ron Santo, first baseman Ernie Banks, pitcher Ferguson Jenkins, outfielder Billy Williams, and the manager Leo Durocher.  Wrigley Field was and is a wonderful ball park, and its fans in attendance are magical, always joining in lustily at the 7th inning stretch for the singing of “Take Me Out to the Ball Game.”  Though the Cubbies failed to make the World Series either of the two years (1968, 1969) that I attended their games with some regularity, the upshot of this was that, though I moved away from the city, I became a devoted Chicago Cubs fan for life.


That was a mistake, and it’s one that many people have made to their regret.  I’ve written about this tragedy before [http://douglaswhaley.blogspot.com/2011/11/potpourri-1.html] and this post is an upgrade of that one. 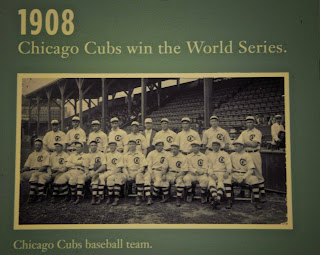 Sports aficionados among my readers will know that the Chicago Cubs last won the World Series in 1908, a longer championship drought than that of any other major North American professional sports team.  Known as the "Loveable Losers," they've routinely disappointed their fans ever since.  When I say “disappointed” I mean “driven near to madness.”  The Cubs have often had promising seasons and then bizarre things go wrong, including a famous moment in 2003 when a fan leaned out from the stands and caught a ball that would have been an out sending the Cubs to the World Series.  For this infamous act he had to be escorted from the stadium under police protection [see http://en.wikipedia.org/wiki/Steve_Bartman_incident].


The Cubs supposedly struggle under “the curse of the goat,” stemming from an incident in a World Series game being played at Wrigley Field in 1945 when a fan named Billy Sianis was ejected from the game because his pet goat was annoying others in the stands.  He supposedly sent a telegram to the Cubs’ owner stating “You are going to lose this World Series and you are never going to win another World Series again. You are never going to win a World Series again because you insulted my goat.”  The truth of all this has been disputed, but the effectiveness of the curse has held.  I don’t believe in superstitions [see http://douglaswhaley.blogspot.com/2010/03/superstitions.html], but if others do they can have a depressing effect on morale.  Damn that goat! 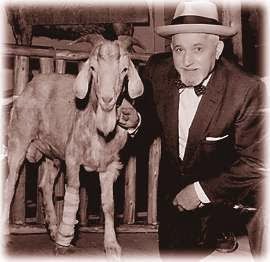 In 2007 and 2008 the Cubs had wonderful baseball seasons (having the best record in all of baseball in 2007 as the regular season closed), but as soon as the playoffs started, the Cubs were immediately eliminated (sigh), in both cases in the first four games.  Those two seasons were too much for me—the Cubs had broken my heart too many times after I’d spent the spring and summer watching game after game.  I vowed to never view a game again until the Cubs had a winning record going, and that pledge has keep me Cubs-free for seven years.  But (another sigh) this year the Cubs have been doing very well, and so I’m back in front of my TV, learning the names of the new players on the 2015 team and watching them with the enthusiasm of old.

This season the Cubs have filled their roster with very young athletes, talented both at the bat and on the field.  The pitching has been impressive, and the Cubs have one of the best records in major league baseball so far this season.  Their new coach is Joe Maddon, hired away at great expense from Tampa Bay where he was twice the American League Coach of the Year.  Last night I watched in delight as the Cubs won a game at Wrigley Field in the bottom of the ninth inning against the Washington Nationals, the team currently leading the Central Division of the National League.  My sleeping neighbors heard my cheer, not to mention my sports-challenged husband (who thinks I’m nuts).  I’m once again bedazzled by the game and my beloved Cubbies. 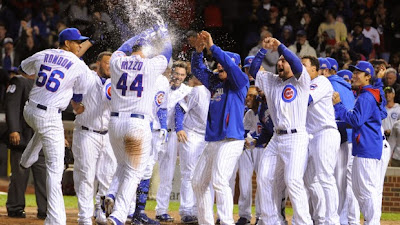 But deep in my inner-Douglas I dread what will likely happen just as it’s happened before.  The Cubs will build up my hopes and then in the fall leave me wallowing in a puddle of misery, crying in my martini while muttering a string of interesting vile words I first learned in my Navy days.  I know too well what Linus experiences in his pumpkin patch each year as he vainly waits for the Great Pumpkin to appear. 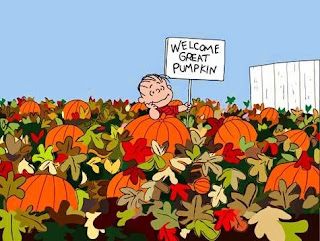 If you're a Cubs fan, people (even usually nice people) will make fun of you.  I sometimes play poker with a group of lawyers (most of them former students) and when baseball season rolls around, I steel myself for the inevitable Cubs jokes.  Being Ohioans, they mostly root for the Cincinnati Reds or the Cleveland Indians, hardly exemplars of baseball renown, and it's doubly depressing to have them snub the Cubs.

A couple of years ago, Free Inquiry, the magazine of Secular Humanist Society, had an article in which one of the questions addressed was whether atheists should proselytize their lack of faith.  The author (with whom I disagree) decided the answer was no.  He ruefully concluded that some people should be “left with their illusions” undisturbed, like "entrepreneurs, lovers, and Chicago Cubs fans."  That hurt.

But as one baseball announcer commented during a recent game, maybe this will be the Cubbies’ year because “any team can have a bad century!” 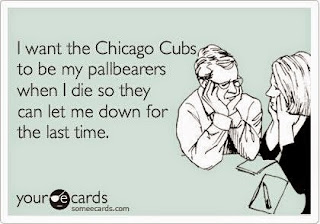 That card goes well with Steve Goodman's "A Dying Cubs Fan's Last Request," which I didn't know about until fellow baseball fan and former student David Groshoff sent me the following.  The video of the song is terrific:

"Perhaps the life of the Cubs fan was best lyrically summed up in 1984 by two-time Grammy award winner and Cubs fan Steve Goodman, who wrote the tune only months before his untimely death to Leukemia (he also wrote "Good Morning America"/"City of New Orleans" among many "real" songs). Goodman was to have sung the national anthem before Game 1 of the Playoffs that year, but passed away a few days earlier, so Jimmy Buffet took Goodman's spot, and the "Go Cubs Go" that is played after every Cubs' win was written by Goodman as well: https://youtu.be/6HTRxAHfwPY"