When My Family Turned Into a Criminal Gang: Charleyne’s 70th Birthday

In this blog I’ve often written posts about my fascinating ex-wife Charleyne (see Recent Posts below).  We were married in 1971, had one son, Clayton Robert Whaley, and, sadly, divorced in 1976 when I finally faced the fact that I was gay.  We’ve always been great friends, and that is true to this day when she is married to her high school sweetheart, John Fitzgerald, with whom she reconnected at a reunion some five or six years ago.  Clayton is now married to Maria, and they live in a suburb of Seattle.

Charleyne turned 70 on August 7th of this year (a Sunday) and Clayton and Maria decided to have a birthday party in her honor, so Charleyne and John flew there from Indianapolis, their home, and David and I made a couple of horrific connecting flights from our home in Columbus to be there for the whole weekend.

The days that followed were a delight, and though the actual birthday was on Sunday, the party was held on Saturday at Clayton and Maria’s home.  At that party, of course, the “Big Birthday Song” was sung, and that tune has had quite a history (see Related Posts below).  The song was written decades ago with a lyric I jotted down while waiting for a plane in an airport, and it’s designed to be sung whenever someone hits a birthday ending in a zero.  Clayton, a talented composer, wrote the original music, but I deemed it too complicated for an untrained audience to sing, so I simplified his melody, and that’s the version that has now been sung a great deal (and is available for sale online; http://douglaswhaley.bandcamp.com/track/big-birthday.)  Clayton, understandably, has always longed for a musical version of the song that is closer to his original melody, and so, he informed David and me prior to our visit, he would be sending us an updated rendition of the song that he expected us to perform with him at his mother’s party.  He also told us that when we arrived (the day before the event) he would rehearse with us.  We looked at the new version of the song he provided, gulped, and agreed.  Happily, we can both read music and we trusted Clayton to guide us through the new song.

The rehearsal was interesting.  We finally understood what Clayton was planning, and we went over it a couple of times.  He has inherited some of my genes all right.  When David and I were dragging at our entrances and tempo early on, he put us right immediately by saying, “No, no—it’s 6/8 time!  Pay attention to that.”  Properly chastised, we did as told and things immediately improved.  The original lyrics are pretty brutal (“Every year more people here are younger, friend, than you!”), and Clayton had massaged them into a more anodyne message.

There is a video of our performance, but the videographer failed to catch the beginning, so Clayton recorded that and I spliced the whole thing together.  Here is that video of the song as we sang it to Charleyne and the guests: https://www.youtube.com/watch?v=zYw9mncWb1I&feature=youtu.be

Since the actual birthday was on Sunday we celebrated it by an evening on the town, going into Seattle, having a drink at an upscale bar, and then a memorable meal at Maximilien, a restaurant overlooking Puget Sound, where much merriment was exchanged, and a number of alcoholic beverages consumed with efficiency.

The trouble started when we returned to the downtown parking lot to retrieve the two cars that brought the six of us (Charleyne and John, Maria and Clayton, David and me) into the city.

It was closed, Sunday being the problem.  Did the proprietors warn us that vehicles had to be retrieved by 8 pm on the Sabbath?  No.  Was it after 8 pm?  Yes; it was around 9:30.  Was there an explanation on signs or the parking ticket as to how to deal with this problem?  No.  Did we panic?

Well, sort of.  There was no obvious way into the underground parking lot at all, but then Clayton remembered the entrance on the other side of the block which we had used to enter the building on arrival, and, suggesting that the older folks follow, he and Maria took off at a trot to see if they could get in there.  The four elders followed at a walking (fast walking albeit) pace.  When we arrived on the opposite side, Maria was standing waving to us from the entrance cars use to drive down a ramp into the lot.  She and Clayton had seen a car doing this just as they arrived, so they followed it, and when a barrier went up to allow the car to pass, they had stood beneath it so it wouldn’t come back down.  Clayton was there now, holding that position.  We all went down to him, and he announced that Maria would stay here to keep this barrier up while the rest of us would go get the cars.  Everyone except me followed Clayton, but I stayed with Maria, thinking it was a bad idea for a beautiful woman to be standing there alone almost on the street.  She said she’d be all right without me, but—what the hell—I stubbornly stayed.

There was an additional problem.  Cars could come back up this ramp, but there was a second barrier with a wooden barrier in the lower exit lane, and it was in the down position.  When Clayton, driving one car with David as his passenger (John following in the other with Charleyne) came to this barrier there was no obvious way to make the goddamn thing rise.

But then David, channeling his hitherto hidden criminal side, jumped from the passenger seat and physically raised the barrier, holding it steady, like Hodor.  Delighted, Clayton gunned his engine and both his and John’s cars shot through.  David and I climbed in with Clayton as he passed, and Maria joined John and Char in the second car.  Homeward we raced, laughing like lottery winners. 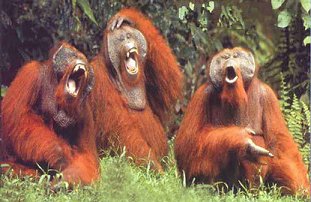 As we drove, Clayton turned to David and me, and innocently held high his parking ticket.  “We got out without paying this,” he mused.  “Are we criminals?”

Lawyer that I am, I promptly informed him that the next day John, Charleyne, David, and I would promptly exit the jurisdiction, but he and Maria should get a good lawyer if and when the police came knocking.  That produced a nervous chuckle, but happily the Washington authorities so far have made nothing of our great parking lot caper, so the “Seattle Suburban Gang” is still at large and free to laugh at parking barriers once again.