Free Inquiry Magazine, published the Center for Inquiry, is the leading Humanist publication in the United States.  I am pleased that this month’s issue (December 2017/January 2018) contains an essay I published on this blog in 2011.  It is the second piece I’ve published with Free Inquiry, the first being “Creating the Bible: Water Into Wine,” http://douglaswhaley.blogspot.com/2017/01/ive-published-article.html.   A third article is scheduled for publication next year.  My latest article is below, with pictures added from the original 2011 post. 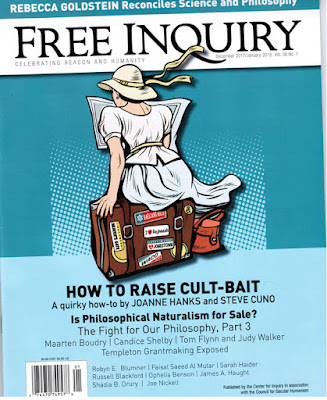 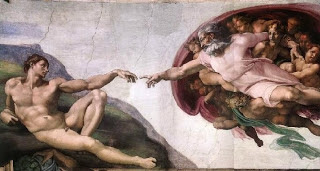 Atheist:  I know you rarely do interviews, so thanks for sitting down for this one. Let me start by asking if there's really such a thing as a hell where sinners writhe in eternal damnation?
God:  (Laughs)  Oh, my heavens, no!  It’s been pointed out that no fair deity would send Gandhi to hell just because he wasn't a Christian, and that’s clearly right.  What sort of creator would condemn human beings to eternal torment because they happened to belong to the wrong faith or made some misstep in life?  Who on earth hasn't done something that in, the eyes of one religion or another, would have them flaming forever?  The idea of hell is something earthlings thought up all by themselves.  They think it helps keep people in line.

Atheist:  Do you pay a lot of attention to what is going on in human civilization?

God:  Hmm.  Well, only from time to time.  Sometimes I do amuse myself by watching the complicated mess down there, but then centuries will pass and I don't visit at all.  What humans do can be fascinating, but it also can be downright boring or too sad to watch.  Often, of course, it's funny.  There’s an amusing period going on right now.

Atheist:  Many people believe God always monitors their activities, or sends angels or such to check on them.

God:  They get that notion from the various ancient books they wrote, but it's used for the same purpose as hell.  Omnipresent surveillance makes people behave better, or at least that's the theory.  (Scoffs)  Angels!

Atheist:  So you didn't dictate those ancient books? 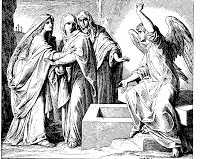 God:  (Laughs)  They contradict each other!  And, really, have you read them?  Take the Christian bible which clearly was written by many hands, each with different styles and ranging from typical myth stories (which can be entertaining though improbable) to lists of kings or begats which can put the most attentive reader right into a coma.  The New Testament can't even agree on the details of the opening of Jesus's tomb!  If I'd authored the bible the whole work would be tiny and have a consistent message.

Atheist:  What would your bible say?

God:  I’d shorten it down to “Do unto others as you would have them do unto you.”

God:  That's plenty!  If people concentrated on the Golden Rule the earth would be a much better place.  Men wouldn't subject women to rape or mutilation or hide their identities in massive clothing, nor would young children be sexually assaulted by men of the cloth, or thousands of other atrocities—from war to unthinking bigotry—hidden or even promoted by religions. It sickens me.

Atheist:  Why don't you stop these things? Why is there such misery in the world? That's always been the big question people ask about God?

God:  I don't micromanage, though many humans think I do.  When people are disappointed, others try to console them with meaningless slogans like “God works in mysterious ways”—as if that helped.  Look, the people who promote religion have an idea of God which is incapable of “falsification”—there's no way to prove it wrong.  That should make them suspicious, but it doesn't.  If good things happen, they thank God.  If they pray and their wish comes true, they truly believe God answered their prayer.  But if the opposite occurs and a tsunami wipes out half a million people or if a prayer doesn't work, do they ever condemn me?  No, that would be “blasphemy.”  I get the credit, but never the blame—a cushy reputation!  So bad things happen to good people, and good things happen to bad ones, but either way, I come out on top.  It's both quite silly and wonderful at the same time.  They don't seem to notice that the world goes on exactly as it would if all their religions were completely wrong and I had nothing to do with it.

Atheist:  Yes, that's how it seems to me.  Why don't they notice?

God:  Humans are so afraid of dying—of their existence being stuffed out and having no more significance than that of an ant—that they'll believe impossible things and especially about some sort of hazy afterlife.  They spend a lot of time thinking about something that won't occur: a destination that doesn't exist.  In the meantime they don't concentrate on the journey they take along the way, wasting precious time.  The ants are better at putting meaningful effort into life.

Atheist:  But aren't we somehow different from the ants?  Better in an important way?

God:  It's true that homo sapiens are the only creatures with a clear idea they're going to die someday (which is what leads to religion and all these afterlife speculations), but from the ant's point of view, no. 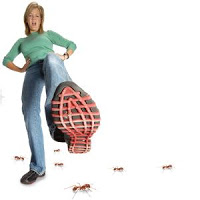 Atheist:  Atheists have no expectation of an afterlife.  What do you think of them?

God:  Well, at least they're thinking.

Atheist:  Why don't you just appear and make us all believers?

God:  Believers in what?  The universe clearly exists.  It’s quite wonderful.  That should be enough.  Beyond that, you're strictly on your own.  Some day you’ll all wake up and stop concentrating on needless ritual and religious books that frequently give bad advice.  The astounding hatred of others that has been done in my name should shame everyone on earth.  It's mindless.

Atheist:  So you don't interfere. The universe just is what it is.

--------------------------------
Douglas Whaley is an emeritus professor of law at The Ohio State University, a prolific blogger, and the author of the atheist thriller Imaginary Friend (2008).  This article is reprinted with permission from the author’s 2010 blog post, the most popular single essay in his blogging history.