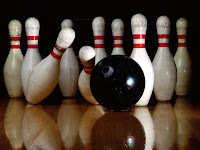 I was never a bowler of any noticeable ability. As described before in this blog (see "Doug, Please Get My Clubs From the Trunk," August 20, 2010), my parents were both fine athletes, and their considerable skills included bowling. But as I grew up my attempts at rolling a ball down an alley confirmed their suspicions that my DNA lacked their bowling genes. But, also as reported in this blog (see "The Marina City Party Crowd," January 13, 2011), when I was practicing law in Chicago (age 25), I was in two bowling leagues at once, where I finished in the middle of the pack of male bowlers, with my average being 145 or better. Later in life there was the odd bowling experience, but nothing steady. Now that I'm in my 60s, I suspect my bowling days are over.

All of that is a prelude to this story, which is about the most important single game I ever bowled. It attained that status because of the magnitude of the stakes involved. The game occurred in 1973 (the year I turned 30) in Chapel Hill, North Carolina.

If you're a law professor it's very common to receive an invitation to be a Visiting Professor at a strange law school for a semester or even an entire school year. I have said yes to these invitations on a number of occasions, with the first one being for the school year 1973-74 at the University of North Carolina Law School. My wife Charleyne had just graduated from law school, and our son Clayton was born on December 29, 1972, so the following summer the three of us decamped from Indianapolis, where we were living, for a year in a beautiful part of North Carolina, where I had a very productive and rewarding experience at UNC's fine law school.

Clayton was the cutest baby, and before we left North Carolina in the summer of 1974, he was walking and talking. The woman I married was a dedicated feminist, and when it came to raising the baby, chores were agreed to be 50-50 parental involvement. This included everything: feeding  (Char didn't breastfeed, due to an infection, once she and the baby came home from the hospital), diaper-changing and all. As anyone who's cared for an infant can attest, it has its rewards but it’s also a pile (pun intended) of work. Just getting out of bed in the middle of the night to tend to a crying baby can be the hardest thing you do in that 24 hour period.
﻿﻿
One evening Charleyne and I had hired a babysitter for Clayton and gone to Raleigh for a bridge tournament. As we were driving home that night through the beautiful woods, somehow the topic of bowling came up. Char said she'd bowled in high school, but hadn't done it since. I mentioned my Marina City league experience, but when she heard that my average was only in the 140s, she scoffed at how low that was. "Well," I said defensively, "it was about average for the men in the league." With a dismissive wave of her hand, she commented that without practicing she could easily bowl 145. I was having none of it. "You couldn't bowl 125 in three tries," I told her firmly.

"Oh? Want to bet?" she challenged. Hmm, I was sure she couldn't do it, but the real question was what to bet? Our finances were mingled. I mentioned that problem to her, and the car went quiet while we both thought about it. Suddenly Charleyne came up with the solution: "The loser has to take care of Clayton for two entire weekends while the other person does whatever seems fun."

The car was silent again as we each thought about the awful implications of losing versus two weekends of idleness. Added into the mix was the fun of winning the bet itself, so we finally shook on it.


A few days later we took Clayton with us to a local bowling alley, choosing a slow period since neither of us wanted talented North Carolinians laughing at our lack of ability. We agreed to play three games together, though what I bowled was irrelevant to the wager. I started first, and was predictably lousy. I no longer remember, but my scores for the three games were all somewhere between 130 and 150. 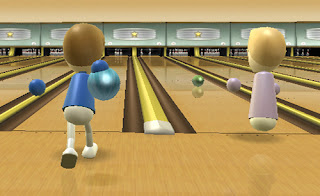 Charleyne was a different matter. In her first game she kept throwing gutter balls, and she finished with a score of 87. Annoyed at herself, she informed me she was merely getting warmed up. I nodded sympathetically. And, by golly, her second game was better. She rolled 95, or something like that. At this point she became depressed—partly because she wasn't the bowler she'd been in high school, and, more importantly, she faced the prospect of losing the bet. That would mean not only relentless teasing by me (lasting, perhaps, forever—witness this blog) but also two weekends as Clayton's sole caregiver.

Moreover, her right thumb was throbbing. She said so, and held out the poor thing for me to see. "I think I've really sprained it, Doug," she said in obvious pain. Of course, I was all sympathy. "Well, honey, don't make it worse! Just forfeit the last game, and we'll go home right now."

Perhaps that was not well phrased. I'd forgotten what a tiger Charleyne can be when aroused.

With a sort of growl, she attacked the pins with renewed determination in the final game. While I don’t remember any of the other scores (hers or mine) with any precision, I am absolutely positive that on that third game she rolled a 126.

﻿﻿﻿﻿﻿My darling son Clayton and I bonded closely over the next two weekends, while Charleyne was all sweetness and light as she became a woman of leisure during the same period. Kindly, she insisted on tucking Clayton into his bed each of those nights, after which she'd give me a most loving smile. After all, a child needs his mother, and a husband ought to feel appreciated.﻿