The Homosexual Agenda To Conquer the World

The incredible homophobic furor sweeping Uganda (see my post "Choose To Be Gay, Choose To Be Straight, January 25, 2011) is largely sponsored by Americans—sad but true. These Americans include not only evangelical types like Rick Warren, but also major politicians who are part of the C Street "Family," currently being exposed for the incredibly dangerous international force they are. If you think I'm exaggerating, read the current bestseller "C Street: The Fundamentalist Threat to American Democracy" by Jeff Sharlett, or, instead, merely Google up "C Street" and explore the hundreds of sites that will pop right up on your screen. These helpful American advisors warn the Ugandans that homosexuals have now conquered the USA, and their next step is to take over the entire world.

Wow! A homosexual agenda that subjugates the planet Earth! Who knew we gay people could do that! Double wow!

But when the rhetoric is absent and only facts remain, let's take a deep breath and ask what's true, and what's not (a common theme of this blog). No matter the gains gay people have made in the United States—and they are big ones—homosexuals are still second-class citizens under any definition of that term. They cannot marry and have their rights recognized on a federal level (though some small number of states do so), they are treated with contempt by many religions, gay politicians are almost never elected to office, and no legal protections exist nationwide to protect gays from being fired, denied housing, turned down for licenses, given the right to adopt children, being turned out of restaurants, and, depressingly, much more.

But there is a the true worldwide homosexual agenda, a startling and diabolical plan of action, and I hereby announce it. This plan is to have the world, all over, in every country, treat gay people the same as everybody else. That's it. Nothing more. I dare to say I can speak on behalf of the vast bulk of homosexuals when I proclaim our goal is only to have each of us judged by our worth as human beings and not by the question of who catches our eye on the street or who we choose to share our life's story.

Why do people believe homosexuality is wrong and must be discouraged if not actively punished? Why is there such hatred, even revulsion, against gay men and lesbians? How is it even possible that some parents turn their children out onto the street and shun them thereafter on discovering their "deviation?" Take the Mormons, for example (though many other religions react in an identical fashion). The Mormons I've met have always been decent and kind human beings, but if their children come out of the closet, many Mormon parents abandon them instantly. Salt Lake City has a disgraceful history of gay children living in the sewers! [If you think I'm overstating this, watch the DVD "The Mormon Proposition," the last 30 minutes of which deals with this very issue in footage that will make you squirm.] 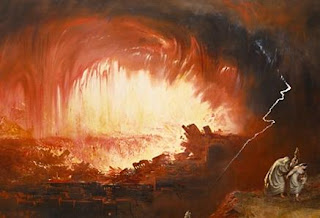 Homophobia has many causes. For the Mormons, Ugandans, followers of Islam, and fundamentalist Christians, it's their religion that commands this hatred. That any religion demands such a closing of the mind to reality and fairness always astounds me, but what can I say? It's true—these believers hold that their God commands death and eternal damnation for homosexual behavior—and you have to ask yourself what punishment could be worse than horrible death in this life and unending torture in the next? Typically they will not hear or believe evidence that homosexuality is genetic and not a chosen behavior, but even if they admit that's possible, their response is then that murder might also be genetic, but that label wouldn't excuse it. True enough, but society can adapt to homosexuality, while murder is, well, murder. 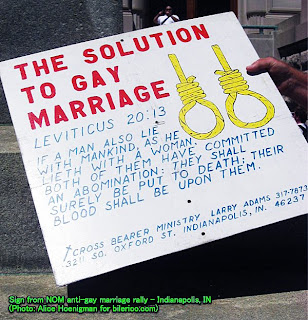 Another justification for homophobia is the instinctive revulsion many people feel when they contemplate homosexuals in bed making love. If it's icky to them, it must be condemned. Hmm. I know some gay people who are repulsed by the idea of heterosexual coupling (this is not true of most homosexuals). But if the gays who can't stand the thought of heterosex were to be in the majority, would their revulsion be a legitimate ground for discriminating against straight people?  You don't have to want to do something yourself to understand that it might be important to others.  A tolerance for differences makes civilization run smoother.

By far the chief reason for disapproval of gays is lack of thought about the matter. A combination of history, inertia, ignorance, and indifference piles up, and gays have to climb over this mountain to gain basic rights. Ah, but let a straight person know, or, even better, like a gay human being, and he/she can't keep up a habit of mindless disapprobation.

As countries all over the world relax their prohibitions, both social and legal, against homosexuality, more and more gay people walk into the daylight. This has an exponential effect, and soon almost everyone in, say, the United States knows at least one gay person. It's a rare family of any size that doesn't have one member or more who's obviously not straight. When something is everywhere—in the family, on TV, discussed in news stories, referred to in song and story . . . culturally invasive, in short—it no longer seems odd. Some fundamentalist churches in the USA have had to answer questions from their flock such as "Is it all right to for me to have a gay friend?" It would be interesting to hear the pastor's answer to that query. Decades after the Stonewall riots in 1969 sparked the modern gay movement, the whole issue of "acceptance" is starting to seem silly in this country. The vast majority of our straight people have come to believe that homosexuals should be treated no differently than others. This particular cultural revolution is nearing end game.

But note well that the desired ending is not homosexual dominance of the United States or any other culture (which, given the small percentage gays constitute, would be impossible). The desired ending is much less daunting: treat gays just like straights. In a perfect world gays will not be regarded any differently than, for instance, people who are left-handed or who have red hair: a minority that's part of the whole human family.

I close with a poem that A. E. Houseman wrote in 1895 when the British playwright Oscar Wilde was sentenced to two years hard labor in prison for the crime of sodomy:


Oh who is that young sinner with the handcuffs on his wrists?
And what has he been after that they groan and shake their fists?
And wherefore is he wearing such a conscience-stricken air?
Oh they're taking him to prison for the colour of his hair.

'Tis a shame to human nature, such a head of hair as his;
In the good old time 'twas hanging for the colour that it is;
Though hanging isn't bad enough and flaying would be fair
For the nameless and abominable colour of his hair.

Oh a deal of pains he's taken and a pretty price he's paid
To hide his poll or dye it of a mentionable shade;
But they've pulled the beggar's hat off for the world to see and stare,
And they're hauling him to justice for the colour of his hair.

Now 'tis oakum for his fingers and the treadmill for his feet
And the quarry-gang on Portland in the cold and in the heat,
And between his spells of labour in the time he has to spare
He can curse the God that made him for the colour of his hair. 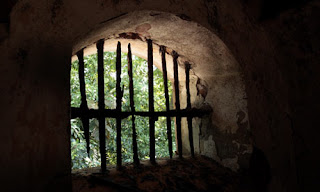