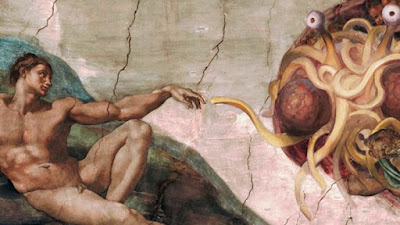 I know, I know.  That title needs unpacking before it makes sense.  Let me do that.

The word “ejaculate” has fallen on hard times.  In its purest historical sense (and the one I’m using in this blog post) it simply means to express something suddenly and passionately.  Thus, anytime you’re surprised and say “Wow!” you are ejaculating.  Of course the more crude and therefore dominant meaning is to produce semen at orgasm, which is also a sudden and passionate demonstration of feeling, but let’s drop that meaning for now.

A “pious” ejaculation is what you exclaim when, for example, you hit your thumb while hammering and your exclamation has some religious connotation.  There are many examples: “Jesus Christ!”  “Oh, God!”  “God damn it!” “Holy Fuck”  Etc.   Doubtless you can think of many more (or will if you speculate a bit).  “Oh My God” has become a national ejaculation for almost any situation. 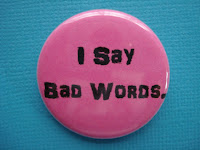 But here’s a major problem that I, along with many atheists, have.  When we strike our thumbs with a hammer we utter these same ejaculations since we too were raised in a society where . . . well, that’s what you say when your thumb is throbbing.  But when I hear myself exclaiming these things—the remnants of my Catholic upbringing—I’m annoyed.  I like to think I’ve exorcised God and all religion from my life—only . . . damn it . . . to be contradicted by my own reaction.  [Interestingly, in the Catholic Church short prayers are still called ejaculations.  Children are encouraged to say things like “Jesus, Mary!” and even repeat such ejaculations throughout the day, thus heeding St. Paul’s injunction to “pray without ceasing.”]

In my novel, an atheist thriller called “Imaginary Friend” (available on Amazon), the protagonist Franklin Whitestone is an atheist who is “outed” on national TV and whose life falls apart immediately thereafter.  Escaping from multiple troubles to the quiet of his own home after a veritable nightmare of a day, he decides to have a martini and gets out the ingredients, starting by slicing a lemon.  Here’s the relevant passage:

Shortly thereafter he cut his thumb and immediately strung together three inappropriate religious references: “Jesus,” “hurt like hell,” and “Goddamn it!” One more problem, this one linguistic, to add to all the others.
Now, he took a sip from the martini. Yes, yes, this might help. He staggered back to the living room and plopped down in his overstuffed easy chair, taking increasingly bigger gulps.
What was going to happen to him? Kelly was pissed, his job appeared to be in toilet, and huge numbers of people were demanding his head on a pole. He remembered his prediction last night that today would be a better day than yesterday, and the thought made him snort in something like amusement.
Happily, the trembling in his hands stopped as the martini did its job.
With a sigh, he mumbled, “Oh, Lord!” and then immediately frowned. He’d done it again—an automatic religious response to a non-religious stimulus.
Well, if he couldn’t solve any of his other problems, perhaps he could do something about this minor annoyance. What could he substitute—train himself to say—in situations where some sort of phrase was needed to express surprise, or dismay, or wonder?
He tried to think of famous ejaculations used by others. Shakespeare’s characters said things like “odd bodkins” or “egad,” but those sounded too stilted. Little Orphan Annie was famous for “leaping lizards,” but Franklin was far too macho to imitate that sad child. Charlie Brown’s favorite exclamation was “Rats!” and Franklin experimented with saying that out loud a couple of times before discarding it. Part of him liked “Rats,” but another part thought it came across as forced, unoriginal. What I need, he thought, is a euphemism with punch. Something no one else says. Something individual to me, Franklin Whitestone.
Perhaps he could invoke the names of now-discredited gods of old: “By Zeus!” for example, or “Oh, Baal!” Hmm.
Then he remembered the alleged primitive belief that the world rests on the back of a giant turtle (which in turn sits atop a stack of other turtles, etc.). Perhaps there was a solution there.
“Great Turtle!” he exclaimed out loud, and that made him laugh.
When the martini disappeared over the course of the next twenty minutes, Franklin went to the kitchen to fix another. Of course, that probably wasn’t wise, but—truth be told—nothing else sounded better. He pictured his cleaning lady coming in tomorrow and finding him snoring atop a mound of empty gin bottles.
“Turtles preserve us,” he muttered as he looked around for the remains of the lemon.

At the time I wrote this passage I didn’t know about the Flying Spaghetti Monster and the religion worshiping this deity called “Pastafarianism,” but now that I do, I can see how that entity might come to my aid in this situation.  Let me tell you about the FSM. 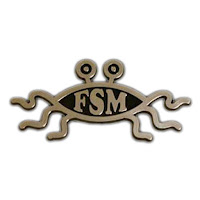 This cult began in 2005 when Bobby Henderson petitioned the Kansas State Board of Education to allow Pastafarianism to be taught in public schools along with “intelligent design,” pointing out that there was equal evidence for the validity of both.  For his highly-entertaining and informative letter explaining his argument in detail see https://web.archive.org/web/20070407182624/http://www.venganza.org/about/open-letter/  The Kansas dispute created much interest on the internet and Henderson’s starchy sect spread as a weapon in the battle against by religious organizations to take over public education.  He has since published a book explaining the Official Gospel of Pastafarianism. 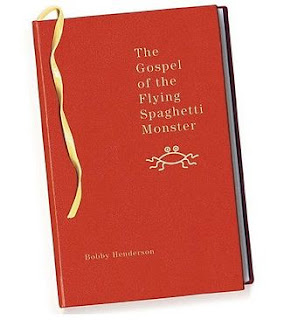 From the FSM Gospel Manual:
Behold the Church of the Flying Spaghetti Monster (FSM), today’s fastest-growing carbohydrate-based religion. According to church founder Bobby Henderson, the universe and all life within it were created by a mystical and divine being: the Flying Spaghetti Monster. What drives the FSM’s devout followers, aka Pastafarians? Some say it’s the assuring touch from the FSM’s Noodly Appendage. There are those who love the worship service, which is conducted in Pirate-Speak and attended by congregants in dashing buccaneer garb. Still others are drawn to the Church’s flimsy moral standards, religious holidays every Friday, and the fact that Pastafarian Heaven is way cooler. Does your Heaven have a Stripper Factory and a Beer Volcano? Intelligent Design has finally met its match—and it has nothing to do with apes or the Olive Garden of Eden.

Much has happened since then, and the photos below illustrate. 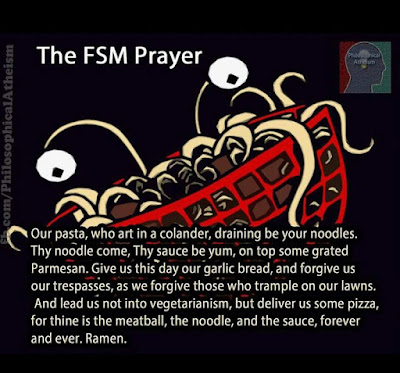 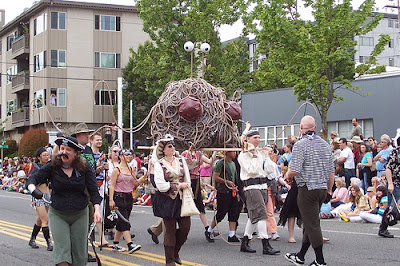 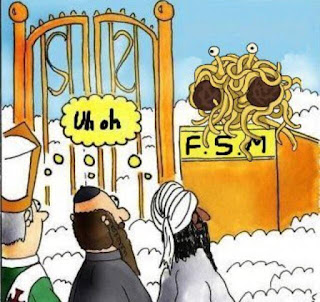 Some courts have allowed members of the FSM to have driver’s license photos taken with colanders on their heads, but in Cavanaugh v. Bartelt, 178 F.Supp.3d 819 (2016), a federal court refused a prisoner’s request to dress in pirate’s guard while celebrating his belief in the Flying Spaghetti Monster.  The judge ruled that this was not a sincerely held religious urge, but merely  participation in a self-confessed parody.  Hmm.  Probably just as well, since a prisoner dressed as a pirate with a colander on his head might have substantial problems relating to his fellow inmates. 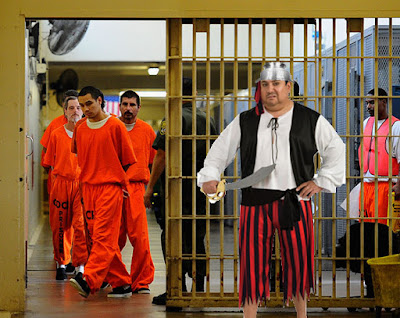 But back to my main issue.  Might I solve my pious ejaculation problem by converting to Pastafarianism and using its terminology when I strike my thumb and mutter something out loud?  What would fit here?  “NOODLES!”  “PASTA!”  Might bystanders look at me askance?  Readers, feel free to comment on all this in the Comments segment appended to this post.

Maybe I’d be better off with a mildly offensive non-religious ejaculation when hammer mishaps occur.  A simple “Fuck!” should do it.