Go, Ben, Go: Why I Want Ben Carson To Win the Republican Nomination

My husband observed the other day that it looks like Ben Carson is always stoned when he speaks.  That made me laugh because it’s true.  Ben’s soft, measured delivery is perfectly consistent with having just had a couple of deep tokes from a banger joint, and then struggling for coherence as he expresses deep thoughts.

It would also explain some of those messy musings.  Witness his take on the total absence of homeless people:  “Nobody is starving on the streets.  We’ve always taken care of them.  We take care of our own; we always have.  It is not the government’s responsibility.”  You see?  In Ben’s world there are no starving people, so government shouldn’t create a problem where, by golly, none exists. 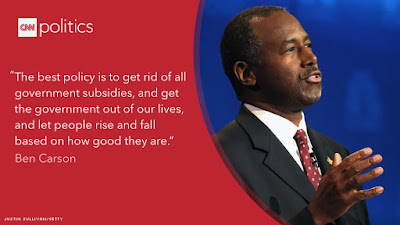 Or his take on homosexuality, which he says must be “chosen behavior” since men go into prison straight but come out gay.  And on gay marriage, which he conflates with bestiality and the practices of the National Man/Boy Love Association, which openly advocates pedophilia:  “My thoughts are that marriage is between a man and a woman. It’s a well-established, fundamental pillar of society, and no group — be they gays, be they NAMBLA, be they people who believe in bestiality — it doesn’t matter what they are — they don’t get to change the definition.”  Well, after a drag or two of good weed that all fits together. 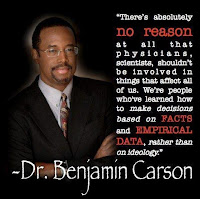 Ben is a man of science, right?  A neurosurgeon ought to understand biology, right?  But Ben doesn’t believe in evolution, nor does he understand even vaguely how evolution is said to work.  It just sounds like gobbeldygook to him, so he laughs and makes fun of anyone who could possibly believe such nonsense.  [Alas, this is true of many of the Republican candidates.]  For Ben Carson God supplies the answers and we need look no further than the Bible for guidance on all issues, evolution thus being clearly wrong.

Ben has also said that Obamacare, which he really hates, is more tragic for the nation than 9/11, and added another apt historical comparison: “You know Obamacare is really I think the worst thing that has happened in this nation since slavery. And it is in a way, it is slavery in a way, because it is making all of us subservient to the government, and it was never about health care. It was about control.”  He then doubled-down on this nonsense by commenting “I think what’s happening with the veterans is a gift from God to show us what happens when you take layers and layers of bureaucracy and place them between the patients and the health care provider. And if we can’t get it right, with the relatively small number of veterans, how in the world are you going to do it with the entire population?”

Want more?  There are lots of his similar wanderings from sanity on the net.  See, for example: http://www.forwardprogressives.com/5-ben-carson-quotes-proving-hes-too-crazy-to-be-president/ and http://www.addictinginfo.org/2014/11/15/top-10-quotes-that-prove-neurosurgeon-ben-carson-doesnt-have-the-brain-to-be-president/. 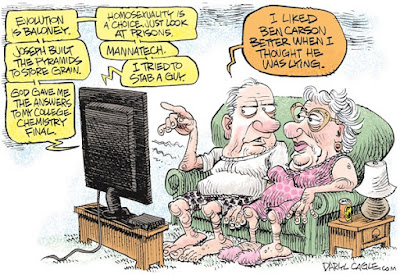 Strangely enough I do not fault Ben Carson for misremembering his own history (whether he was offered a scholarship to West Point, or met with Westmoreland, etc.).  All Ben is guilty of there is confabulation, a mental trick I’ve written about before that makes all of us mindlessly rewrite our memories and then believe them to the point where we’d pass a lie detector test [see “We All Are Brian Williams: Confabulation Muddles Our Stories,” April 20, 2015; http://douglaswhaley.blogspot.com/2015/04/we-all-are-brian-williams-confabulation.html].  Every single candidate running for the Presidency is guilty of this same confusion, as is everyone reading this, so I give Ben a pass on his faulty memory.

This presidential election I’ll confess to being something of a Yellow Dog Democrat.  The phrase refers to someone who’s so partial to voting for Democrats that if the Democrats nominated a yellow dog, they would vote for that dog.  Sure, on the rare occasion in my life I’ve voted for a moderate Republican, but that species has died out so I won’t have a chance to do that again.  And once or twice there’s been a Democratic candidate for some office so bad that I couldn’t pull the lever to support the jerk.  But for the 2016 election the Democrats aren’t running a yellow dog.  They’re going to run Hilary Clinton, and she’ll make a fine president.  I’m sure hoping the Republicans nominate one of the current clowns in the running, and Ben is my very favorite opponent for Hilary.  She’d stomp him flat, probably 90-10 in the final tally.  Hell, a good looking yellow dog would also likely beat him.  So my chant is "Go, Ben, Go!" 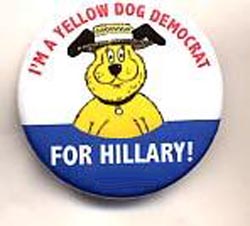 In a future post I’ll switch to “Go, Donald, Go!” with similar (perhaps even greater) enthusiasm.

“The Shame of Republicans in Congress,” March 23, 2015; http://douglaswhaley.blogspot.com/2015/03/the-shame-of-republicans-in-congress.html