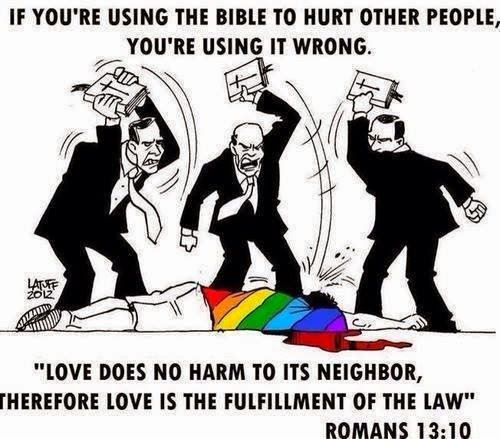 In the battle over gay marriage (which I’m pleased to say is going very well, and, as I’ve predicted in Related Posts below, is highly likely to be over by the end of June 2015 when the Supreme Court next addresses the issue), there have been a spate of recent letters to The Columbus Dispatch explaining that the bible condemns homosexuality and calls for marriage to be celebrated solely between one man and one woman.  This post addresses those assertions.

1.  Is Homosexuality Condemned by the Bible?

Alas, yes it is.  There have been valiant attempts through the years to take each of the biblical passages doing this and explain them away, but in my opinion they fail to convince any objective reader, even one who has read these explanations carefully.  The most famous text-by-text discussion of how the biblical passages can be supposedly read not to make homosexuality sinful is the well-known book by John Boswell “Christianity, Social Tolerance, and Homosexuality” (1980).  It’s a scholarly work, much praised, and the copy I bought when it came out and heavily marked up just as my own adventures in gay activism began still sits on my shelves in an honored position. 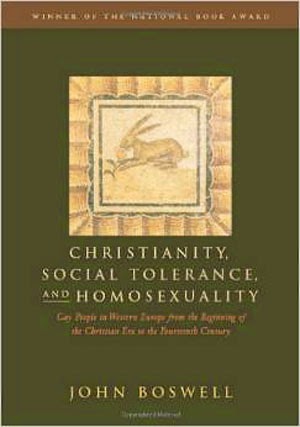 a.  Sodom and Sin.  God’s destruction of the city of Sodom is often referenced by today’s Christians as demonstrating the sinfulness of homosexuality, but Boswell points out that homosexual acts are never specifically mentioned in the story except as possible threats to the visiting angels.  His major thesis and that of many scholars is that Sodom was destroyed for its inhospitality to visitors, a major sin in early days.  It’s certainly used that way by Jesus when he said to his disciples:


Whosever shall not receive you, nor hear your words, when ye depart out of that house or city, shake off the dust from your feet.  Verily I say unto you, it shall be more tolerable for the land of Sodom and Gomorrah in the day of judgment, than for that city.

[Matt. 10:14-15].  Even if Boswell’s reading of the story is right, centuries of misreading have equated Sodom’s fate with homosexuality and an attempt to persuade devout Christians of the wrongness of their interpretation will be dismissed without investigation.

b.  Other Old Testament Passages.  Leviticus states “Thou shall not lie with mankind, as with womankind: it is an abomination” [18:22] and “If a man also lie with mankind, as he lieth with a woman, both of them have committed an abomination; they shall surely be put to death; their blood shall be upon them” [20:13].  Those look difficult to refute, but Boswell is up to the task, explaining that they only forbid ritual impurities and not moral wrongs (comparing it to the prohibition of eating non-Kosher foods).  Since St. Paul later freed Christians from the necessity of observing Jewish ritual prohibitions, Boswell contends that these precepts fell by the wayside as well.  To bolster his views Boswell points out that the Old Testament praises “intense love relations between persons of the same gender . . . e.g., Saul and David, David and Jonathan, Ruth and Naomi.”  Once again this will be a hard sell to devout Christians.

c.  Dumping the Old Testament.  Another common way of getting around Old Testament prohibitions against homosexuality is to point out that there are many, many prohibitions of things in the Old Testament that we no longer think of as sinful: eating certain foods, wearing certain colors or garments [Leviticus 19:19 “Neither shall a garment mingled of linen and woollen come upon thee.”], or bizarre notions of fairness like cutting off a woman’s hand because it touched the genitals of a man fighting with her husband:


When men strive together one with another, and the wife of the one draweth near for to deliver her husband out of the hand of him that smiteth him, and putteth forth her hand, and taketh him by the secrets: Then thou shalt cut off her hand, thine eye shall not pity her.

[Deuteronomy 25:11, 12]  If these proscriptions no longer apply in the modern world, the thought goes, neither should supposed condemnations of homosexualty. 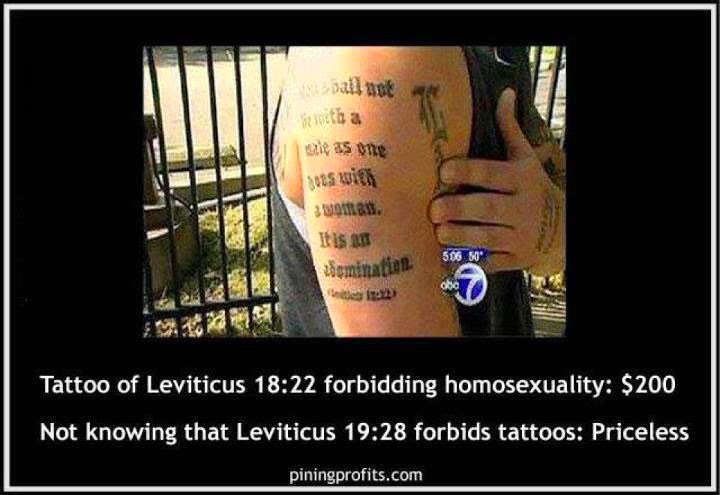 d.  The New Testament.  As is often pointed out, Jesus said nothing about homosexuality (as he wandered about with male companions).  But Paul supposedly condemns homosexuality in three passages.  Boswell disposes of two them [1 Corinthians 6:9 and 1 Timothy 1:10] as mistranslations of “licentious” that have nothing to do with gay sex, but Boswell has a more difficult task with this famous passage from Romans 1:


26 For this cause God gave them up unto vile affections: for even their women did change the natural use into that which is against nature:  27 And likewise also the men, leaving the natural use of the woman, burned in their lust one toward another; men with men working that which is unseemly, and receiving in themselves that recompence of their error which was meet.

Here’s what Boswell has to say about this:


[T]he persons Paul condemns are manifestly not homosexual: what he derogates are homosexual acts committed by apparently heterosexual persons.  The whole point of Romans 1, in fact, is to stigmatize persons who have rejected their calling, gotten off the true path they were once on.  It would completely undermine the thrust of the argument if the persons in question were not “naturally” inclined to the opposite sex in the same way they were “naturally” inclined to monotheism.  What caused the Romans to sin was not that they lacked what Paul considered proper inclinations but that they had them: they held the truth, but “in unrighteousness” (v. 18), because “they did not see fit to retain Him in their knowledge” (v. 28).

He finishes by stating that “Paul did not discuss gay persons but only homosexual acts committed by heterosexual persons.”

Out to the side of this last passage in the margin, the 1980 version of myself had written “GAK!”—the same gasp I always write on essay exams when the student has said something outrageously stupid.  What?  Boswell thinks it’s okay for the bible to condemn bisexuals?  Or maybe just those who are zeros on the Kinsey scale (completely heterosexual) who somehow go crazy one night and have a wild encounter with someone of the same sex?  Since I was fighting for the right of all people to express their sexual orientation in any responsible way, this was an unacceptable conclusion.  We now know that there are not distinct categories of “heterosexuals” and “homosexuals,” and Boswell should have known that in 1980 since Kinsey had made it perfectly clear back in 1948 [see Related Posts below].

Other writers have offered up different explanations to wish away what Romans 1 very clearly says [see, for example, the heartfelt exposition by a young gay preacher on Huffington Post at http://www.upworthy.com/there-are-6-scriptures-about-homosexuality-in-the-bible-heres-what-they-really-say?c=huf1], but they all ring hollow to me.  If Paul (or for that matter the writers of the Old Testament) had thought his meaning was unclear—that there was any wiggle room so that homosexuality was all right in some circumstances—I’d bet a large amount of money that he’d have written much more on the topic to make it damned certain that he believed homosexuality was a major sin.

2.  Does the Bible Condemn Gay Marriage?

Well, the bible doesn’t actually say a word about gay marriage, though one suspects that its authors would have been appalled at the idea of Adam and Steve exchanging rings.  But the best response to the retort that it does condemn such unions comes from this letter to the editor printed in the Dispatch on June 25, 2014:


I must respond to the Friday letter “Gay marriage runs counter to God’s word” from Tom Duncan.  I am not sure what Bible he is reading, but “God’s word” defines marriage in additional ways. For instance, there are several stories of major characters in the Bible who engaged in polygamy (apparently sanctioned by God). There are several instances of such polygamous male figures also including any number of concubines. Deuteronomy 22:28-29 prescribes that a rapist must marry his victim and pay her father to compensate him for his loss. Genesis 38:6-10 spelled out a requirement that a widow who had not borne a son must marry her brother-in-law. These relics of the Old Testament are just as much a part of God’s word as the verses describing what is now being referred to as “traditional marriage.”


Can we stop taking our moral cues from an ancient, politically assembled collection of myths written by and for people far removed from the modern population?


3.  Conclusion.  When I say that the bible does condemn homosexuality and certainly has no support for gay marriage in it, I don’t worry a bit about that conclusion.  I’m an atheist, and what ancient writings have to say about a homosexuality that its authors didn’t understand it of no moment to me.  The bible was written by heterosexuals (90 percent of people on the planet are predominantly heterosexual), so of course it’s not going to treat gay people well.  At the time it was written it was “them against us” and procreation (which increased the size of our tribe versus their tribe) was important.  The earth has now been overpopulated so that concern is moot, and indeed a wise policy would promote homosexuality to keep births under control.


Many and perhaps even a majority of homosexuals have religious beliefs, and they very much want their religions and its holy books to support their lifestyle.  If those books don’t do that, they’ll either have to accept that unpleasant fact and move on, or try and torture the meaning of the books so that they say something other than what is plainly meant.  I understand that urge, but I’m a lawyer and I’m interested in facts over yearnings.  What is is.


The answer is simple.  I say let’s stop constructing modern policy from ancient mistakes and get on with doing what’s right and fair based on what we know to be true.