Teaching Cats the Rules of the House

I ordered 20 copies of my novel “Imaginary Friend” last week because I have a number of upcoming speaking engagements at which I planned to sign and sell books.  This past Saturday I opened the new copies that arrived on the dining room table, took out the packaging that came with it (the usual brown paper wrapping, all crumbled up) and then downloaded the books into a suitcase that I trundled to the Ohio Union for my first speaking engagement of the summer.

Barney, my cat who is small of brain but large of heart, sometimes violates this rule, but not because he’s a rule-breaker, it’s simply that he forgets.  This rarely happens, but the last time was the day after we returned from the winter visit to Florida when I walked into the dining room, and Barney was standing on the table.  He purred when he saw me, and started coming to greet me, when all of a sudden a look of horror crossed his face.  “I’M GOING TO BE PUNISHED BECAUSE I FORGOT I’M NOT ALLOWED UP HERE!!!”  Since Barney was often punished by his prior owners, who I believe beat the brains out of him, this is no small thought for him to have, and he leaped from the table to run and hide.


My other cat, Mama, is a different matter.  Rules?  Schmooles!—these silly rules are made to be broken, just don’t get caught—that’s her attitude.

Therefore when I heard the rustling of paper I knew to be on the dining room table, there was an obvious culprit.  I quietly sneaked around the corner, saw Mama engrossed with the paper, and thundered in my preternaturally loud voice “NO CATS ON THE TABLE!”


It was very satisfying.  Mama jumped as if electrified, hovering about four feet above the table, and when gravity reasserted itself, she bolted from the room in absolute panic, heading for the basement, sure in the knowledge that I wouldn’t follow her there.  She’s figured out that with my recent knee replacement I don’t yet lightly go up and down stairs.

﻿﻿
Instead I waited for an hour or so until she came casually strolling into the living room where I was having a martini, watching the news.  She appeared certain that the statute of limitations had erased her most recent transgression, and (confident things were as usual) she strolled to the window overlooking the back yard and sat down to peruse the neighborhood.  When I, silently, rose ominously from my chair, and advanced to where she was sitting, she realized her error and fled behind the sofa.  So I quietly walked to the appropriate spot on my side of the sofa, leaned over the sofa, suddenly planted a finger pointedly on her back, and said loudly “NO CATS ON THE TABLE!”

She somehow managed to make it up to the loft upstairs in one leap. 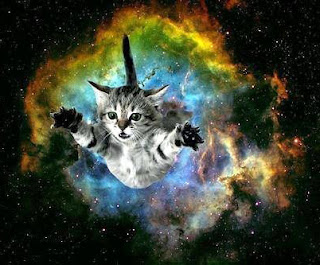 Now, if this had happened to Barney, who's easily confused and wants so very much to do right, he’d have been cowering for days.  Ah, but not our Mama.


She loved it!  Mama’s bored too much in life, and this was a big event!  Could she goad the Big Mammal into more retribution (knowing, all too well, that it’s mostly pretense on my part)? When she next came down to the living room, she strolled to the window, as before, almost yawning.  But you could tell that, although she wasn’t looking in my direction, she was braced for Round Three.


And—damn it!—she was very disappointed when it didn’t come.  The martini had mellowed me out and the game was over.  Eventually, ever the diva, Mama climbed into my lap with an attitude that clearly said, “At least pet me, you fool!”
So I did.

And I’d also made sure that cat-tempting items were cleared from the dining room table, thus ending this particular bout.  Who knows what’s next? 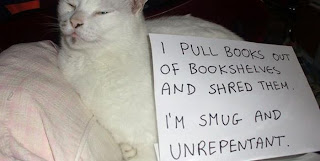 
On a morning two days after writing this post I was sitting in the living room when the doorbell rang.  It was a flower delivery for my next door neighbor, who was not home, and I was asked if I would take it and give it to her later in the day, to which I agreed.  I put the lovely arrangement on my dining room table, and went back to reading my newspaper in the living room.  This, of course, was a mistake.


Mama feels it’s her duty to inspect everything that comes into our home, so I should have been expecting the mysterious noise that emanated from the dining room about fifteen minutes later.  Suspicious, I rose from my chair, and heard the thump of a cat landing on the floor in the dining room.  By the time I got to there everything was just as I’d left it, no cats in sight, but I knew Mama had been up close and personal with the vase of flowers.


On reentering the living room I gazed at Mama, who had not been there moments before, annoyed.  She was studiously hard at work, licking herself with dedication, as if this demonstrated her innocence of any house rule violation.  “You were on the dining room table,” I said, using my prosecutorial voice.  She calmly continued licking, as if to say, “Prove it.”  “I heard a thump.”  More licking, but her reply would have been “Might have been the other cat,” even though Barney could be heard immediately above us, asleep in the loft, snoring loudly. “I know you were on the dining room table!”  But she was contemptuous of my concern, yawned, and went to look out the living room window, done with the conversation, her attitude clearly being “No Grand Jury would indict me.”
Mama should have been a lawyer.
I moved the flowers to the top of the refrigerator, which is where I should have put them in the first place. 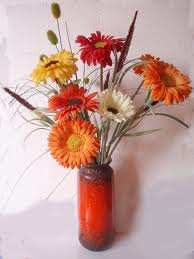