On Mother’s Day: A Story About My Mother and WWII


Both of my parents are dead now, but on Mother’s Day I got to thinking about the following story having much to do with their lifelong romance.


When I was 19 I was surprised one day when my mother told me a story about her marriage to Dad (which occurred on December 13, 1941).  It was a story I’d not heard before, and I marvel at it still.  To the best I can remember it, it goes like this:


In the spring of 1941, my father, Robert Whaley, abandoned his senior year of college at Indiana University to join the Army Air Corp (which became the United States Air Force by the end of World War II).  Like many young men who were joining the services he knew that war was near and that Germany and Japan had to be defeated.  IU, motivated by the same patriotic urge, gave all such seniors their degrees anyway.  Dad was sent to Randolph Air Force Base near San Antonio, Texas, where he received training as a pilot.  In the meantime he was writing letters back to his finance, Lenore Kunkel, with whom he’d fallen in love while they were in high school together in Jasper, Indiana, a small town in the southern part of the state. 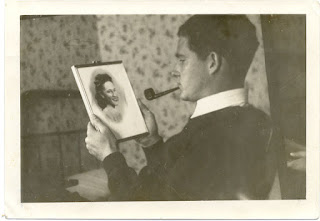 Mom was one of nine children in a very Catholic family, and she’d only been outside of Indiana once in her life when her uncle took her on a business trip to Detroit.  She was in no way sophisticated, and at 23 she was as confused as everyone by the complicated talk of war breaking out.  Dad sent her the money for a train ticket from Indiana to San Antonio so that she could meet him there and get married before he was sent off to his first duty assignment.  In the first week of December, 1941, her father drove her to the train station, she bought the ticket, and with great foreboding, she boarded the train.

The train was packed with military men reporting for duty to various spots and women doing just what she was doing, racing to get married in strange locations.  But for a young woman who was on her own for the first time in her life, she was terrified by the whole experience.  Was this the right thing to do?  Cast off everything she knew and risk her future in a time of war with a new husband who was jumping into the thick of it?  What would she do in Texas, of all places?  What if her beloved Bobby was suddenly sent off to some foreign land—then what would become of her?  A devout Catholic, she did not use birth control, and she might easily be pregnant and soon.


She told all of these fears to a young sailor she met on the train, and he thought her whole story about meeting Dad when she was the head cheerleader and he President of the Class in high school, and their subsequent romance, was great stuff and very romantic.  She agreed with that, but romance wouldn’t solve all the problems and worries that were bedeviling her.  She began to be convinced that this trip was a big mistake, and that she should wait until Dad came back from the war before marrying him.


At Dallas the train stopped and she got off.  She’d decided to get a ticket back to Indiana and return to the safety of her true home.  But the young sailor saw her at the ticket window and asked her what she was doing.  When she told him, he took her by the arm and led her away from the ticket window.  “Look,” he told her, “you’ve forgotten something.” “What?” she asked, defiant.  “You’ve forgotten that at the end of this journey is a man who loves you more than anything in the world, and it will certainly break his heart if you don’t get arrive in San Antonio tonight.”  That made her burst into tears, and, sobbing, she and the sailor reboarded the train.

Things happened fast after that.  Dad met her in San Antonio by sweeping her off her feet in delight on seeing her again after months of being apart, the Japanese invaded Pearl Harbor the next day (which led to a declaration of war), and they were married on December 13th at the base chapel on Randolph Air Force Base (where, by coincidence, Dad would end his military career 27 years later when he retired from the Air Force).  Below is the only picture of the two of them taken on the day of their marriage, a marriage that lasted until Dad died in Texas in 1980. 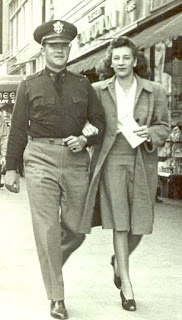 As an Air Force wife, my mother became a world traveler.  She lived all over the globe, routinely moved from place to place without worrying about it, and swore she’d never live in Jasper, Indiana, again.  That proved to be wrong (she died there in 1985), but she lived an incredibly fulfilling life with a wonderful man.  And even late in life she was still grateful to that young sailor. 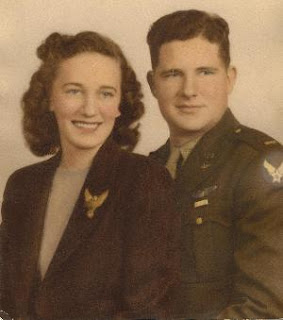