Did Oswald Kill JFK Alone or as Part of a Conspiracy? 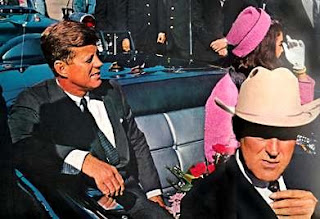 A recent poll shows that 59% of Americans believe that multiple people were involved in a conspiracy to kill President John F. Kennedy in 1963, while only 24% think he acted alone.  As we approach the 50th anniversary of that terrible event, let’s revisit the issue.


On Friday, November 22, 1963, I was a student at the University of Maryland, with a Spanish exam scheduled for 3 p.m. that afternoon.  I was studying for the exam when my dorm room door burst open a little after 2 p.m. with the news that the president had been shot!  It’s hard, all these decades later, to recreate that moment and the shocking blow it dealt.  John Kennedy was a young and vibrant man, truly something new in the White House, and a symbol of hope for a world that needed it when the atom bomb was ticking towards doomsday on a relentless pace.  That JFK had been shot was just impossible!  Like most people on the planet I raced to a TV set and then sat stunned as the events of that day, including the president’s death, were revealed.  My Spanish exam, of course, was cancelled.  On that following Sunday I was sitting watching the same dorm TV when Jack Ruby shot and killed Lee Harvey Oswald, the assassin, as he was being transferred from one jail cell to another.  This One!-Two! punch was both devastating and surreal.  Things don’t happen this bizarrely in real life! 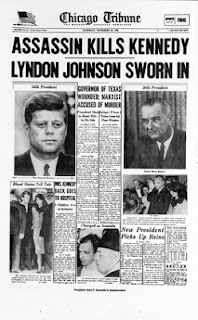 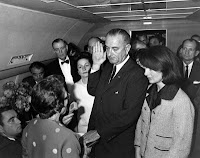 In the months, years, and decades that followed there have been much speculation, hearings, books, commissions, interviews, etc., about the events of that day, and the still unanswered question fifty years later is whether Oswald acted alone or was part of a bigger conspiracy.  At the time I asked my father what he thought and he replied, “Cui bono?”, a Latin phrase meaning “who benefits?”  In crimes the police always look first at the person with the most to gain, and in Dad’s opinion in 1963 that was Vice President Lyndon Johnson, a previously important man who’d become a joke when relegated to the vice presidency, but who was now the most powerful man in the world.  And, after all, the murder took place in Texas, LBJ’s kingdom.  Subsequent historical treatments have not pointed in Johnson’s direction, and there are no serious conspiracies theorists with Johnson as the mastermind behind the curtain.


Johnson almost immediately appointed the Warren Commission to investigate the assassination thoroughly, and a lot of money and time was poured into that Commission’s work.  The final report came down in favor of stating that Lee Harvey Oswald acted alone, and that no other persons were involved in any way.  To reach this conclusion the Commission came up with its “single bullet theory” which explained the three gunshots that were heard at the scene of the crime.  It was clear that the first shot missed entirely, and that the next two shots both struck President Kennedy.  But Texas Governor John Connolly was also shot in the melee, so didn’t that indicate there was a fourth shot from some direction?  No, said the Commission.  The first shot that struck Kennedy went through his body and then also went through Connolly’s before ending up on the floor in the front of the car.  Could a single bullet do that?  The Commission said yes, but lots of conspiracists disagree and have hundreds of theories (another gunman on the grassy knoll off to the side of the vehicle, for example), so this issue is at the heart of the debate.


The assassination was filmed by an amateur photographer standing on a wall near the presidential car as it passed, and the resulting Zapruder film has been analyzed over and over.  In 1978 the House Select Committee on Assassinations investigated the whole matter once again, and was on the verge of concluding that the Warren Commission got it right 25 years earlier when it decided Oswald acted alone, but then at the last minute admitted the evidence of a recording made by an open police microphone present at the scene, and decided that it demonstrated that there was a third shot before the final one, leading to a total of four shots.  Thus there must have been another gunman, since Oswald did not have time to lay down four shots.  That got the whole thing going again.  There was a conspiracy, by golly, but no one could be sure who was behind it: the Cubans, the Mafia, the Russians, and other possible culprits. 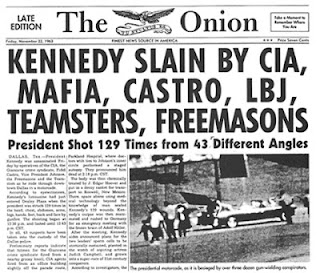 Readers of this blog know that my chief focus is on getting things right, and I’ve often said I would change any opinion I have on receiving credible evidence it is wrong.  I’ve read book after book on the Kennedy Assassination (including the huge Warren Commission Report, which I still own), watched the events unfold live, sat through debates on the possibilities, and viewed many documentaries and presentations on who killed JFK.  As incredible as it seemed early on, the evidence is now overwhelming: Oswald did do it alone.  There was no conspiracy.


The best book to demonstrate this is Gerald Posner’s 1993 “Case Closed,” which explores in details all the possibilities and convinces any reader with an open mind that Oswald was the sole assassin.  Everything fell into this insignificant man’s lap at the perfect moment in history when he could perform an act he could never have planned.  The presidential route went right by the building in which he worked, Oswald was a former sharpshooter for the U.S. military and a practiced assassin (on April 13th of that same year he’d narrowly missed when he tried to kill General Edwin Walker at his Dallas home), and he had the weapons at hand with which to do the job.  It was blind luck that gave him his place in history, but, as one of the characters in Stephen Sondheim’s musical “Assassins,” sings, “First prize often goes to rank beginners.”


In 2003, researcher Dale Myer’s computer animation of the Zapruder film demonstrated that the single bullet theory is true.  The first bullet did go through both bodies, and it came from the Texas Depository window where Lee Harvey Oswald was seen shooting by many witnesses.  So did the next bullet (which struck Kennedy in the back of his head), sent on its lethal journey from the same exact spot.  There were no bullet wounds from any other direction.  See http://www.youtube.com/watch?v=YlUTRMpZi0I.  The open police microphone turned out to be nothing at all.  For the details of its demise see: http://en.wikipedia.org/wiki/Dictabelt_evidence_relating_to_the_assassination_of_John_F._Kennedy.

Pure chance also put Jack Ruby in the middle of this perfect storm.  Ruby, a loud, untrustworthy, passionate man, easy to lose his temper, was the owner of a Dallas nightclub, and a friend to a number of Dallas policemen.  On the Sunday he shot Oswald he’d been told (as many people had—there was quite a crowd at the scene) of the time and place for the move of Oswald to a new location, but Ruby got busy that morning and missed the appointed time.  Instead he stopped to send a telegram to wire money to help out one of the women who worked at his club, after which he moseyed down to police headquarters to see what was up (expecting that Oswald had already been moved), and when Oswald was unexpectedly whisked by him, pulled out the gun he usually carried and shot him.  No one has ever tied Ruby to a conspiracy, and, indeed, all those who knew Ruby said that he couldn’t keep a secret for five minutes and only an idiot would count on him to cover up anything or participate in a major complicated plan.


What’s hard about finally concluding that Oswald was the sole assassin, and that Ruby was just some hack who shot him on the spur of the moment, is that it’s all so ordinary, so purposeless, so lacking in the significance that major historical events ought to have.  These tiny little men, with tiny little plans or no plans, changed the world, and that’s not right, damn it!


But as I’ve droned on before on this blog, coincidences do happen, uncomfortable as it is to appreciate them, and it’s a simplistic view of the world to insist that everything has to have meaning.  See “Related Posts” below.


The conclusion that Oswald acted alone fits all the facts and explains everything in a way that none of the other theories, some of them fantastical in the extreme, do, and therefore is probably correct under the reasoning of Occam’s Razor.  William of Ockham (c. 1287–1347) is remembered as an influential medieval philosopher, with his popular fame as a great logician resting chiefly on the maxim attributed to him and known as Ockham's razor. The term razor refers to distinguishing between two hypotheses either by "shaving away" unnecessary assumptions or cutting apart two similar conclusions. In its basic form the maxim is that “the simplest explanation is most likely to be correct.”


But the most compelling reason for concluding that Oswald acted alone is that conspiracies can’t be hidden indefinitely.  If Kennedy’s death had been carefully planned and executed, the conspirators would have successfully pulled off a masterpiece of a history-altering event and then gotten away with it completely, leaving no provable evidence of what happened.  But people who know secrets this big and juicy eventually tell them to someone (a loved one, a psychiatrist, a drunken buddy at a bar, or a priest on a death bed).  Here were are, fifty years later, and no one’s ever said anything.  That’s, frankly, impossible.  A secret this huge and known to a number of people would have long ago surfaced.  The fact that it has not is the biggest piece of evidence that—like it or not—Oswald was a loner, and all the important details of Kennedy’s tragic death are on public view already.