The Presumption of Heterosexuality and the Invisible Homosexual

The presumption of heterosexuality is so strong that even where it's clear to anyone approaching the facts with an open mind that it's invalid, the presumption will often prevail.  Thus parents will blind themselves to the perfectly obvious homosexuality of one of their children (or at least pretend to not notice despite whatever nagging doubts trouble them when their heads touch their pillows at night).

Sometimes heterosexuals have to face the truth.  When General Dwight Eisenhower was once ordered by his superiors to investigate the possibility of lesbians in the military, he called in his most trusted female officer and asked her to draw up a list of suspected lesbians under his command.  This woman officer was very conflicted as to what to do since she herself was a lesbian.  Finally she summoned up her courage and returned to Eisenhower's office as he was dictating a letter to his secretary.  "General," she told him, "if I have to draw up such a list I want you to know that my name will be at the top of it, and you'll lose the value of my services."  At this point the secretary interrupted by saying, "No it won't, because I'll have to type it and I'll put my name first."  At this, flabbergasted, Ike dropped the whole matter and went back to military matters he understood.  [This is not to say he was any less homophobic than the rest of society in the 1950s; when Eisenhower became President he signed an Executive Order forbidding the hiring of homosexuals by the federal government.]


I was reminded of all this by a column I read in May in the Columbus Dispatch by John Switzer.  He's the newspaper's retired Weather Columnist, and he occasionally writes folksy pieces about nature or local events in central Ohio.  I've enjoyed his musings for years, and was very interested when on May 22, 2011, he wrote a Memorial Day piece about two graves in Pleasant Cemetery in Madison County.  One is of a Confederate soldier from the Civil War named Frank Chick who fought under the famous cavalry General Nathan Bedford Forrest ("be there first with the most"), both of them from Tennessee.  The other is Nicholas Brill, an Ohio native and Union Army soldier who encountered Chick when the latter was a prisoner Brill was guarding at a camp in Columbus, Ohio, during the war.  They were not yet 20 at first meeting, but when the war ended Chick moved into a cabin Brill owned near Mount Sterling, Ohio.  The two lived together until they died in 1922 and 1923 respectively.  Known locally as "the turkey men," they were buried next to each other in an area "separated a little bit from the other graves" (why would that be, do you think?).  In his column contemplating this interesting history, Switzer speculates that this is "a nice story about how two men who were once sworn enemies came to rest in peace side by side throughout eternity."


I immediately sent an email to the address Mr. Switzer conveniently provided at the end of his column.  Here it is:

I have long enjoyed your splendid columns.

Today's column about the Confederate prisoner and his guard who became lifelong friends and lived together—the "turkey men"—struck a chord with me. You say they "somehow became fast friends," and I may have an explanation for that. I'm an aging gay activist here in Columbus, now retired, and it struck me that there's a good chance these men fell in love and became partners. Is there any hint of that? Were either married? Gay couples know how to hide and have done so for centuries.

My best to you. 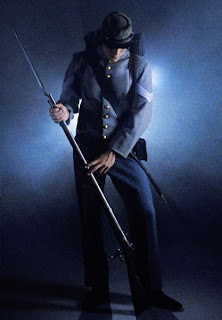 Mr. Switzer never replied.  Obviously it hadn't occurred to him that the "turkey men" could have been lifelong gay partners, but that's as likely—even more probable—an explanation as any other.  Considered as a romance it's even a better story than two straight bachelors who just happened to live together for over 50 years.  Perhaps the reason I received no reply is that this possibility embarrassed or offended Mr. Switzer, but I'll never know.  The presumption of heterosexuality, still quite strong, kept him from seeing a conclusion that in 2011 should occur to lots of people, including straight people, who are beginning to wake up to what's been going on for a very long time.