One of the great pleasures of retiring is that I no longer have to attend faculty meetings, as I did regularly for 34 years.  Meetings of any sort are usually awful, but I'm alive to tell you that a collection of law professors gathered in one room to discuss anything is hell on earth.  Like all lawyers, law professors can verbally litigate sentences just uttered, and, also being teachers, then expound for interminable periods on their own point of view.  It's so boring that mice have moved out of the building rather than ever experience this again.  Indeed, an exterminating service should consider scheduling law school faculty meetings at one contaminated house after another and make a fortune. 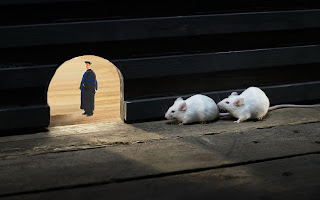 At one meeting back in the 1970s we were all seated around tables forming a large square (so we could see each other clearly and not risk missing any of the bomfoggery).  To avoid injury from falling asleep and smashing my nose on the hard wood of the table, I began to experiment with writing left-handed (I am right-handed by birth).  The professor sitting next to me noticed this and asked what I was doing, and I explained.  Soon he was trying the same thing, and then the person next to him, and eventually six people were productively engaged in this activity. 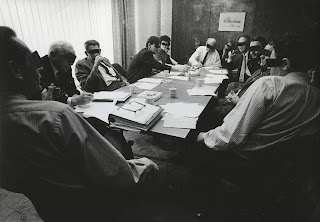 I certainly don't mean to imply that I haven't attended any exciting faculty meetings—there have been a number of those.  At one I made a motion we censor the dean for outrageous conduct, and no one slept through that one.  But on the whole meetings are tedious affairs in which attendees mostly do not listen to what's being said, but are only waiting their turn to rise and speak while spreading their beautiful feathers for an admiring audience.  I became so disgusted with how badly meetings went that I finally sent around to the faculty, half seriously and half in jest, a "Proposed Etiquette for Faculty Meetings."  Here are its rules, somewhat doctored, and with a few additional ones, starting at #6:

1.      Except in extreme cases, it shall be considered rude to raise one's hand to speak more than once to an issue.


2.      No one cares to hear someone take the floor to explain how the speaker plans to vote and with whom the speaker agrees. Let it come as a surprise.


3.      Given the issue, most of the people in the room can predict who will say what. This being so, try to refrain from stating the obvious.


4.      There is much virtue in silence. If you can get through a faculty meeting without volunteering a word, many in the room will think you a splendid colleague.


5.    No faculty meeting should last more than an hour. Anything that can't fit into that period should be put over to the next meeting.  If there's an important item on the agenda, put it first; otherwise its time will be overwhelmed by minutia.


6.    If you are considering raising your hand to speak, first ask yourself, "Am I boring?"  If the answer is "yes," perhaps you should consider never speaking, or at least limiting yourself to no more than 30 seconds per comment.


7.    Also ask yourself, "Am I annoying?"  If the answer to this one is also "yes," re-read number 4 above.  Ignore this at your peril, for if you push your colleagues too far, they will be silently considering severe consequences (see illustration below). 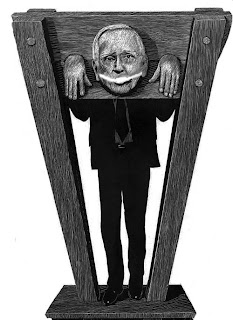 8.    If you are chairing the meeting, be firm.  Cut off the bores and the annoyers.  If the conversation has miraculously stopped, don’t stupidly ask, "Is there anything else someone wants to say?"  On the other hand, if  the discussion refuses to die down, but the debate has descended into either tedium or vitriol, announce that you will take two more speakers only and then entertain a motion to vote.


9.    Bring a copy of Robert's Rules of Order to a meeting, and, when bored, study it.  I became a dangerous faculty member when I serendipitously discovered that a motion to adjourn is not debatable.


Happily, I'm retired and my faculty meetings days are over.  If you, reader, are, alas, regularly exposed to meetings of any kind, you have my deep, deep sympathy.  Good news:  I've heard that with self-hypnosis you can actually learn to sleep with your eyes open.  You might investigate that.