August 20, 2010
Both of my parents were athletes. Dad, while still in college, considered a career in professional baseball (as a catcher) until one bad day when he threw his arm out. Mom had been head cheerleader in high school (see “Bob and Kink Get Married,” June 2, 2010), but hadn’t played many sports until Dad and family were transferred to Japan in 1954, where she learned that a young Japanese maid would come in Monday through Friday from 9 to 5 p.m. for $10.00 a month (remember, readers, that prices were very different then—it was impossible to force more than $3 worth of gasoline inside those large American cars in 1954!). That’s when LeNore Whaley learned to bowl and play golf. Before we left Japan in 1957, she bowled the highest score a woman ever bowled in Japan: 270 (for which she rolled seven strikes in a row). Dad was her teacher, but she was an apt student and very, very good at whatever she tried (for their amusing softball adventure, see “My Competitive Parents,” January 20, 2010).

Dad was a good golfer, but Mom, compared to other women, was excellent, and the two of them were soon playing matches against any two men on Yokota Air Force Base, where we were stationed (outside Tokyo). Years later, when I was in law school, there was some event for which I and my fellow students were gathered in the apartment I shared with two other students, all of us with our dates, dressed up (I forget why), and Mom and Dad were for some reason present. Dad, ever the storyteller, got to discussing these long-ago golf matches, a twinkle in his eye. “Doug’s mother,” he told the assembled youngsters, “knew there was betting going on, but she didn’t know the amount, so she was shocked to learn that $400.00 depended on her making a downhill putt on the 18th hole.” [You can’t imagine how much money $400.00 dollars was in post-war Japan in the mid-1950s, where we four were existing on a Air Force Captain’s salary.] “She was furious,” Dad continued, “and while I was hurrying around moving leaves out of the path of her putt, she hit it, I jumped out of the way, it plopped in the hole, and we won the money!” Dad then paused and smiled. “Now you think I’d be pleased she made that putt, don’t you?” he asked, and we all nodded. “That shows you’ve never been married. She spent it six times.” 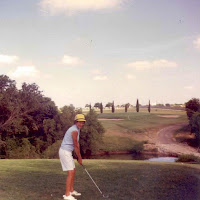 Throughout their marriage, Mom and Dad played golf steadily, and then over the supper table would replay the day’s events verbally. Neither my sister, Mary Beth, nor I (who both suffered through these meals) ever became golfers because we quickly learned that if we picked up a club we immediately received twenty lessons. But because of our parents’ involvement, which included some caddying by me, both siblings know a great deal about the game. And some of my fondest memories involve my mother and her great joy at the game, or remembering her come home all happy, still in her golf shorts, doffing her golf gloves as she came into the house, calling out, “Doug, please take my clubs out of the trunk.” When she scored a hole-in-one in Austin, Texas, in June of 1967, she went back to the course the next day and had her picture taken on the tee of the very hole on which this triumph occurred (see photo).

When I was in law school, Dad, ever curious about legal problems, asked me one day, “Do you think the following scenario constitutes manslaughter? Your mother and her female companions come up to the tee shortly after a party of men have vacated it, and after they get a good way down the field, one of the men turns and waves at them, saying ‘Go ahead, Girlies, and hit,’ at which point your mother tees up and tries to lay all four of them flat, not caring if she actually beans one. Suppose she killed a man. A crime? Well, counselor?” Both disturbed and amused, I wanted to know if this was a rhetorical question, and he said no. I had no opinion; criminal law is not my field.

LeNore and Robert Whaley also won the Bermuda International Amateur Couples Golf Championship one of the years they lived in Bermuda (see “My Year in Bermuda,” February 9, 2010), but it was a harrying finish. All during the tournament, where the couples alternate hitting each other’s ball, Dad was uncharacteristically horrible at putting. It was driving my mother nuts. She’d put the ball on the green, leaving him, say, a two foot putt, and after his stroke she’d have a three foot putt to deal with. The Whaleys were in the lead on the last hole of the tournament, and the same situation occurred: Mom’s lie was a couple of feet from the hole and Dad ominously stepped up to it, putter in hand. “I CAN’T LOOK!” Mom shrieked, and bolted for the clubhouse. “What if I miss?” Dad called to her, alarmed. “DON’T!” she yelled back as she disappeared. Happily, Dad did make the putt, and then teased her for days by bragging how his putting had won the tournament for them.

In her life, my mother garnered many awards for her athletic prowess, and here is a photo Dad took of her when she was at her peak.