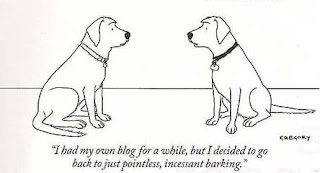 I cannot tell you how much pleasure I get from writing this blog and then enjoying the tremendous response of its readers. Some of those responses are comments printed on the blog itself, others are verbal or sent through other media (Facebook, emails, etc.).

I started the blog because the publicist for my novel, “Imaginary Friend” (see the post of that title on June 22, 2010) said I had to do three things to enhance sales: set up a website, join Facebook, and start a blog. About this same time (November 23, 2009) I had a heart transplant, and when I got out of the hospital and was sufficiently recovered, I started the blog in mid-December. I finally did launch a website: DouglasWhaley.com (which deals not only with the book, but with selling my comic albums, “Strange Songs” and “Gay Songs,” and also promotes the purchase of the song “Big Birthday,” which I wrote with my son Clayton, and which is a nutty substitute “Happy Birthday” song for those ominous birthdays ending in zero (40th birthday, for example). Finally, I joined Facebook, but have yet to appreciate its storied charms.

But the blog has been a true joy! First of all, it allowed me to explain the heart transplant and its aftermath, including the development of a friendship with the donor’s wonderful mother and stepfather, and all this was important to a lot of people who love me. But once that task was accomplished, I explored other possibilities. The Whaleys have always been storytellers, and this blog is a forum for me to record my favorite memories, most of them funny (or scary, see "Bears," February 23, 2010). One topic spurred another, and I’ve had good fun linking the various threads, hoping to ensnare readers like spelunkers dropping deeper into a cave.

Of course there are stories that, alas, I cannot tell. Too personal, too private, too painful, or they would be embarrassing to others or (gak!) to me. Ah, but the temptation to write about certain incidents in my life which would light up the blogosphere, such as that night in Chicago where . . . well—harrumph—let’s just leave it at that.

Above all, I’m a compulsive teacher. By that I don’t mean just in the classroom—I mean everywhere and at all times, boy or old man, drunk or sober, at parties or funerals, in the grocery store line or even at the craps table in Las Vegas. Sadly, this is a talent taken to the level of vice, and I must sternly watch myself at all times lest I force knowledge on unwilling and trapped passersby. Take that craps table, for example. When my wife and I first went to Las Vegas in 1971, Charleyne suggested that beforehand we read some books about gambling. That proved to be smart, and consequently we learned what were good things to do at the blackjack, craps, roulette tables, etc., and what bets were equivalent to throwing one's money in the desert. Say you and I are strangers standing at the craps table next to each other, and as time passes we become friendly, laughing and talking as we share the vicissitudes of the game. When I see you making sucker bets, at some point I won’t be able to stop myself from saying something like, “Might I mention you’re making the wrong odds bets and losing money?” I'm usually taken up on that, and as a consequence you’ll be playing a smarter game, allowing me to shove my inner-teacher back into the cage from which he’d escaped yet again.

This blog has unleashed this mania anew and given it a great podium. Hence, Doug the Teacher has lectured on such subjects as superstitions, taking pills, homosexuality, making decisions, atheism, the fun of riding around with Benjamin Franklin, and so on. If not interested in these matters, just ignore me (as more than one student has done through the years).

My most fun with this blog is in telling stories, and particularly the humorous ones (“Dog Meat,” December 27, 2009, “Teaching English to Cats,” August 6, 2010, “Milking Cows,” June 8, 2010, etc.), or the ones about my family, ex-spouses, and fascinating friends. Perhaps the best post of all wasn’t written by me, but by my father, speaking to readers from the grave (“No Pennies in My Pocket,” July 30, 2010); many thanks to my sister, Mary Beth, for finding that terrific picture of the young Robert Whaley to go with that post).

One unhappy problem. The Flag Counter (posted on January 12, 2010) turned out to be very inaccurate, undercounting steadily, and not displaying flags from countries that did visit the site. On August 20, I added a new StatCounter, which also tracks visitors (including their city and country, and itself has flag replicas). Its use demonstrated that Flag Counter was missing huge numbers of visitors each day.  According to StatCounter I have around 700 unique visitors each month.  At that rate the real count at the end of October, 2010 should have been something like 7000, but Flag Counter hadn't yet reached 1600 at that point (and doesn't even have the flags counted correctly on its own chart, listing twelve on the chart, but if you click on the chart for more information, it then lists thirteen).  As of October 31, 2010, 56 countries have visited the blog! That amazes me!  Nepal?  I only vaguely believe Nepal exists, much less that someone in Katmandu is reading my blog!  I didn't begin counting visitors until mid-January, 2010, and since I sent out a major email when I first started the blog in December of 2009, there have to be 200 or more early visitors who went completely uncounted. For a discussion of why counting flags is important, see "Hans and the Flag Counter," July 5, 2010, and if you like, help him out with his quest. For a rough (and probably low) count of the visitors to the blog, click on "View My Stats" (top of each blog page) and then add 3000 to the number displayed. To see the countries or cities, click on the "Countries, States, Cities" tab in the column on the left. I wrote two emails to Flag Counter complaining about all this, but, annoyingly, never received a reply.
In any event, many thanks to all of you who’ve taken the trouble to read my scribblings. I’ll try to keep things as interesting as possible in future posts, and if you have suggestions—such as adventures you participated in with me that are ripe for retelling, or subjects on which you wish I’d elaborate (“How did “Closure” go?”)—let me hear from you. That email address is dglswhaley@aol.com.
________________________________________