Why Everyone Should Care About Transgender Rights 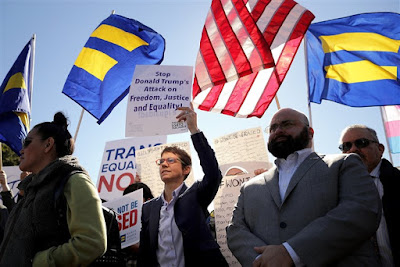 Today is Trans Day of Remembrance, reflecting on discrimination, including death, of trans individuals.

Federal law has long banned discrimination on sex and gender, a move originally made to protect the civil rights of African Americans with (a quirk of political history) women thrown in as an afterthought.  When the question about the scope of the Civil Rights Act was addressed the courts originally ruled that “sex” did not include “sexual orientation.”  But in the last few years a number of federal courts changed their minds about this and held that “sex” does extend protection to gays.  Other federal courts disagreed and the matter is likely headed to the Supreme Court.  The Obama administration sided with a broad reading, protecting sexual orientation, and also issued regulations that “gender” should be interpreted to protect transgender individuals who believe they were born as the wrong gender and work to change that as they get older. 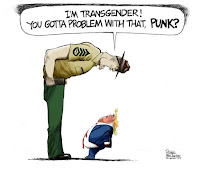 But Barack Obama is no longer our president and the Trump administration, having already decided that trans soldiers should be tossed out of the military, has recently circulated a proposed change in federal regulations that would state “Sex means a person’s status as male or female based on immutable biological traits identifiable by or before birth,” adding that “the sex listed on a person’s birth certificate, as originally issued, shall constitute definitive proof of a person’s sex unless rebutted by reliable genetic evidence.”  For the New York Times article on all this see https://www.nytimes.com/2018/10/21/us/politics/transgender-trump-administration-sex-definition.html.

If adopted this change would encourage the states to enact so-called “bathroom” bills that would require transgendered folks to use restrooms of the gender they were born with, even if they have so dramatically changed themselves that they no longer conform in any way to that gender.

Upset at this, George Godwyn, who is not himself transgendered, went on Facebook with this entry:

I posted a picture of Buck Angel, a transgender adult film actor, in a few of large, sometimes huge, Trump groups. The picture showed a very buff, ripped Mr. Angel from the waist up, shirtless, with a shaved head and sporting a Fu Manchu mustache. He is an extremely masculine looking guy. With the picture I included the question “This person has a vagina. Which bathroom should they use?”

Here is a picture of Buck Angel: 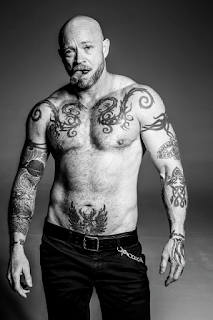 I thought at least some of these people will realize how silly it would be to want this man to use the ladies room. How socially awkward and alarming that would be, in so many situations. Putting aside how dangerous it would be for the man, simply on the basis of the immediate, practical effect on the other diners in the given Applebee’s or wherever it was happening.

The post got hundreds of comments, finally thousands. Immediately. The Trump supporters had a very clear answer and they were adamant about it. Almost no one answered with “the men’s room”. A few said things like “if they’ve got a vagina, they use a woman’s room, if they have a penis, they use the men’s room.” But the majority of the of the commenters had an answer I hadn’t considered at all. These people had worked out a very simple solution to the problem of transgender people and the norms revolving public restrooms.

They wanted transgender people to die.

Mr. Godwyn himself received death threats.  A full account of what happened can be found in his subsequent Reddit post from which I took these quotes: https://www.reddit.com/r/asktransgender/comments/9qo9ra/a_very_very_scary_result_from_a_question_given_to/?st=JNMMW5TE&sh=ea7586d8.

Transpeople are in fact murdered with horrifying frequency, particularly male to females, and these crimes often go unsolved or result in ridiculously small punishments meted out by judges or juries who have little regard for the deceased victims.  Consider that current statistics indicate that 1.4 million people in the United States are transgender.  Should their lives be lesser?

I have quite a history with the gay rights movement in Ohio, being one of the founders of Stonewall Columbus, the leading gay group in Columbus (established in 1981).  See the Related Posts below for many of my discussions about the battles to allow to have gays have the same rights as everyone else—no more, no less.

When the gay rights movement was finally getting major traction in the 1970s and 80s one of the first questions was whether to include bisexuals in the categories of people to be protected.  Believe it or not, some controversy existed as to this.  Many studies showed that there were actually very few true gay male bisexuals.  Most men claiming that title ultimately turned out to be on a path to coming out as a gay man.  But the evidence was strong that a goodly number of women really were bisexual in orientation.  And, as someone pointed out to me at the time, if these folks will join our cause if we let them , why not swell the gathering chorus demanding fair treatment for sexual minorities?

Next came the demand that a “T” be placed at the end of LGB to represent the transgender/transsexual people who are clearly discriminated in truly ugly ways.  At a time when the homosexual community was struggling to accomplish anything at all it was hard to add this new sexual minority to the battle, and the LGB community has a shameful history of resistance to doing so;  see https://www.washingtonpost.com/outlook/2018/10/29/trumps-attack-trans-people-should-be-wake-up-call-mainstream-gay-rights-movement/?noredirect=on&utm_source=reddit.com&utm_source=reddit.com&utm_term=.82cf9f9e27f8.  But in this new century at least the issue is settled: trans people are certainly entitled to the same protection that all LGB people have been seeking.  This is a no-brainer. 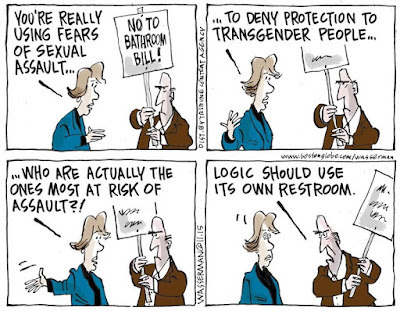 And it makes sense to say that straight people’s misunderstanding of what is going on is not grounds for treating sexual minorities—all of them—as subject to different rules in a civilized world.  Sexual minorities are discriminated against because of an inborn characteristic having to do with sex that is different than problems encountered by the large majority of people.  Plus transexuals have the same acceptance problem as homosexuals.  All the LGBT lettered babies are born into a straight-dominated world that doesn’t understand them, a world that thinks what they want to do sexually is a choice (and a bad, even evil one at that), and condemns them for making that choice.  The answer to this mess is the same too:  educate the populace to understand that LGBT individuals should be judged on merits having to do with matters other than sexual orientation or gender identification.  Let's use Martin Luther King Jr.'s standard: the content of their character.

All the scientific and sociological evidence supports the biological assertions in the above paragraph.  Gays can’t choose who to be sexually attracted to; trans people are born knowing what sex they are even when it does not match the body they inhabit.  No one is making this up, and the social problems caused by misunderstanding these issues must be solved in favor of treating all people equally.  Give everybody a chance to make the most out of the life they have been handed.
If you doubt homosexuality is a natural biological phenomenon, look at the scientific evidence.  Even in the animal kingdom it’s routine.  In the 1999 book “”Biological Exuberance” Dr. Bruce Bademihl, in incredible detail, explores the more than 450 species of mammals, birds, reptiles, insects worldwide who engage in homosexual activity. 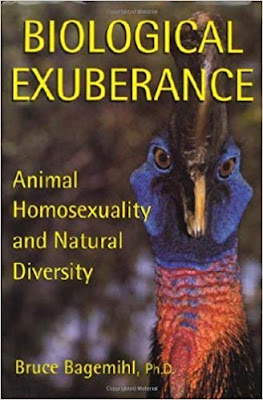 Gays are largely winning the public acceptance battle, but---damn it---the trans community is in trouble.  The chief reason is that the nature of transgender problems sounds too bizarre and foreign for most people.  But if you are a mother whose three year old son tells you that “I’m really a girl, Mama,” you’ll have to confront a very different future than you had planned.  How parents (and society) react to this statement makes all the difference.  Forcing the child to behave and adopt the trappings of the birth sex—the usual choice—does not work, any more than forcing gay people to marry the opposite sex does.  As soon as the trans child figures out what is really going on and how to escape, he or she sets out to do what can be done to become the person he or she knows is the true center of their universe.

These struggles are huge, scary, and very hard for people who are born into the “right” sex (“cisgender” people: those happy with the sex assigned at birth, i.e., most of us) to understand.  Or, even understanding, then empathizing with.  Want to see what it would be like?  Test your empathy for the dilemma?  Hmm.  Try this: Watch at least one episode of the FX show entitled “Pose,” which tells the incredible story of the trans community in 1980s NYC  (eight terrific episodes so far), acted mostly by trans actors themselves.  Season One is available on cable’s FX channel: https://www.fxnetworks.com/shows/pose; or on Amazon Prime.  If you watch the first episode you will watch them all. 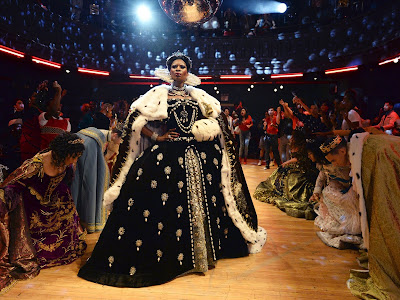 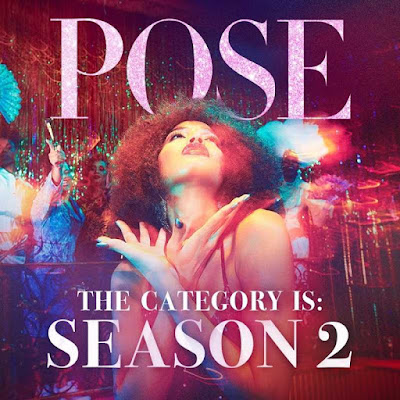 Mr Godwyn’s Reddit post on how astounded he was at the hatred he encountered by supporting transgendered people only emboldened him further.  Here is his conclusion:

Here's my own final thought.  We are in a world in which decisions are being made about who is worth protecting.  Me?  I choose everyone.

“Does the Bible Condemn Homosexuality and Gay Marriage?” June 29, 2014; http://douglaswhaley.blogspot.com/2014/06/does-bible-condemn-homosexuality-and.html