Donald Trump has gotten where he is by trusting his instincts to outpace the common hoard by doing outrageous and over-the-top things to attract attention, demonstrating he’s a very different candidate than those the Republican party has forwarded since Lincoln, its first.  Therefore it’s interesting to watch him make a mistake when choosing a vice presidential mate and going for what he assumes is the “safe” and “responsible” choice, as traditional Republicans urged him strongly to do.  My guess is that Donald’s gut pushed him to tap Newt Gingrich, upsetting a lot of responsible Republicans but in keeping with Trump as Trump.  Gingrich (intelligent, experienced, half mad) would have filled the usual role of VP candidate job as “attack dog” with canine ferocity approaching “wolf.”

Mike Pence is more poodle.  Sure, on cue he’ll yap fiercely, but he has all the gravitas of a vaguely animated corpse, not quite alive, trying very hard to appear human.  It’s easy to picture him at a formal viewing playing the part of the deceased.

Okay, I’m being too hard on the man (though he’s oh so easy to make fun of).  Let me try instead to lay out the facts as clearly and fairly as I can.  (Deep breath)

Actually Michael Richard Pence and I have a number of things in common.  We were both born in southern Indiana, raised Catholic, and graduated from law school (though two decades apart—I wonder if he used my textbooks when in school).  We both married and raised a family.  After that, however, our stories differ dramatically.

Mike (as he prefers to be called) is a far right conservative.  That statement more or less sums him up.  Whatever the far right embraces, he likes it, urges it, and pushed its agenda when he was a Congressman, and, as a governor, signed its bills into law.  He is the darling of the NRA, hates legislation restricting tobacco (“Smoking doesn’t kill,” Mike stubbornly insists), dismisses climate change as fantasy, loves charter schools, and has said that the Supreme Court’s decision upholding Obamacare was as bad as the 9/11 attacks (though he later apologized for that claim).  In Congress and as governor he has worked hard to abolish any right to abortion.  Most recently he signed into law a bill that would have made women who aborted fetuses bury or cremate the remains, and made it a crime for doctors to assist in an abortion if the woman’s stated reason was a disability in the fetus—this law was recently struck down as unconstitutional by a federal judge.  Michael Pence doesn’t believe in evolution, favors using coal as a major energy source, and signed a bill that forbade Indiana municipalities to raise the minimum wage above the federal level.  Mike sums himself up as "a Christian, a conservative and a Republican, in that order."

It’s Mike Pence’s record on homosexuality that made him a national disgrace in March of 2015, which I’ve written about before: “A Gay Hoosier Lawyer Looks at Indiana’s RFRA: The Religious Bigot Protection Act,” March 30, 2015;http://douglaswhaley.blogspot.com/2015/03/a-gay-hoosier-lawyer-looks-at-indianas.html.  Pence has always being rabidly anti-gay, opposing gay marriage as violating God’s will, against any protection at the state level from anti-gay discrimination, and (when in Congress) pushing for a bill that would have taken federal money from groups fighting HIV-AIDS and divert it to groups engaged in “conversion therapy” (i.e., “pray-away-the-gay” and professional reparative therapists who “talk it away,” all of which have been much debunked by medical groups and even some reparative groups who have finally given up this ridiculous farce).  But that March, after pressure from religious groups, Mike signed into law Indiana’s “Religious Freedom Restoration Act,” which, through clever wording, voided all of Indiana’s municipal LGBT protection ordinances and specifically allowed private individuals to discriminate against gays in employment, housing, and public accommodations when doing otherwise would violate a person’s religious liberty.  Mike’s signing of the bill was attended by many happy religious figures. 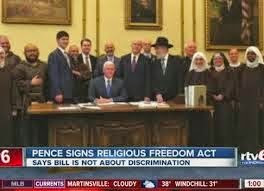 The outcry was enormous: quickly companies pulled out of deals to open up shop in Indiana, sports organizations threatened to move big events elsewhere, major celebrities went to social media and whipped up anti-Indiana activity, other states forbade travel to Indiana, and the  Indianapolis Star ran a banner headline addressed to Pence and the legislature saying starkly “FIX THIS NOW.”  Governor Pence was quizzed on ABC by George Stephanopoulis who, in six tries, couldn’t get Mike to say whether the new statute was meant to discriminate against gays or not.  Here is the short video of that effort (and if it won't load on your device you can see it at
https://www.youtube.com/watch?v=Q2oeLgAFeCg):

With national finger-pointing aimed at him everywhere, a surprised Pence quickly huddled with the legislature and had it pass a “clarifying” amendment, restoring LGBT rights at the municipal level.  Pence explained that the Indiana statute was never meant to discriminate against anyone (!), a remark that shows he’s either brain dead or so bad a politician that he can’t even concoct a credible lie. This retreat also made homophobes furious with him, thus alienating a key support group. They’ve not forgotten how quickly he’ll fold when challenged on his core principles.

Now Michael Pence is vying for the Vice Presidency of the United States, and all this baggage is about to be clicked open, contents revealed for all to see.  Viewers will be asking themselves the usual question they ask about any possible VP: “What sort of president would this man be?”

Trump himself had major worries that he was being railroaded into choosing Pence, and he dithered until midnight of the final day it was possible to delay the announcement [Pence had to tell the State of Indiana that day whether he would run for reelection as governor since state law did not allow candidates doing so to also run for other offices].  By all accounts The Donald  was unhappy at the pressure, and when he appeared the next day to publicly confirm that Mike Pence was his running mate, he first spoke for half an hour on unrelated matters before briefly introducing Pence and then fleeing the stage—not at all the usual hoopla over the VP choice.  It was as if his choice of Pence was an afterthought, not worthy of much movement of the spotlight away from himself.

Many people have wondered how Trump as president would handle decisions under pressure, and this display is a bad harbinger.  Very bad.

The Trump/Pence logo also appears to have been poorly thought out, and after being proudly unveiled was almost immediately withdrawn, another major “OOPS!.”  “TP,” alas, is the usual shorthand for toilet paper, and social media became giddy with mean menes on point.  [If the video below won't load you can find it at
https://www.youtube.com/watch?v=4tZdNRqF67o] 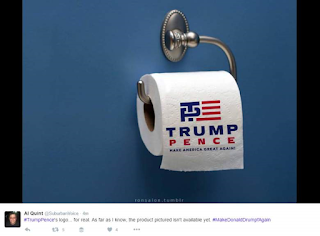 In the title of this post I jokingly compared Mike Pence to Sarah Palin, but perhaps a more telling reference would be to Dan Quayle (the first George Bush’s vice president).  Quayle was a former student of mine from the early days of my career when I started teaching at the Indiana Indianapolis Law School, though I have no memory of him (I do remember with admiration his wife Marilyn, also a law student, and a splendid one).  Dan Quayle was another Hoosier selected as a running mate, and once he became vice president he had major problems with the job, primarily because he wasn’t sharp enough to handle himself on the national stage.  Dan Quayle jokes were everywhere, and he ended up being an embarrassment to whom history will not be kind.  Now I fear that if Trump were somehow elected, Mike Pence will have the same “deer in the headlights” tenure. 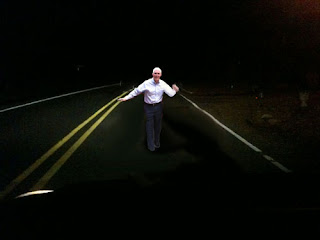 “A Homophobic Organization Throws in the Towel: Goodbye to Exodus International,” June 21, 2013;http://douglaswhaley.blogspot.com/2013/06/a-homophobic-organization-throws-in.html