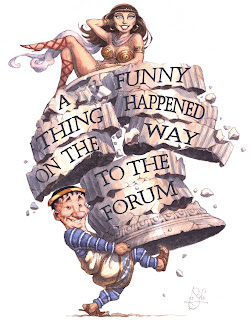 As explained before on this blog, in 1961 I joined the Navy just out of high school and spent a year aboard ship [see “Douglas Whaley, Deckhand,” http://douglaswhaley.blogspot.com/2010/12/douglas-whaley-deckhand.html], before being transferred to the island of Bermuda (!) for my final year of active duty  [see “My Year in Bermuda,” February 9, 2010, http://douglaswhaley.blogspot.com/2010/02/my-year-in-bermuda.html].  I’ve always been interested in Broadway musicals, and while in Bermuda I first heard the score of the original cast album of the new show “A Funny Thing Happened on the Way to the Forum” (hereafter “FTH”—typing that all out over and over is a chore).  This slapstick farce of a musical has a book by Burt Shevelove and Larry Gelbart, with music and lyrics by Stephen Sondheim (first effort at writing both).  It is melodic, very funny, and was a major hit, running for three years on Broadway (and much revived since—in 1996 I saw the wonderful production that starred Nathan Lane as Pseudolus, the conniving slave who manages to trick every other character in the show at some point). 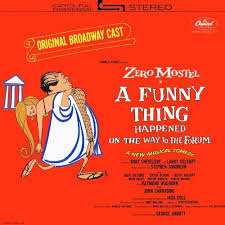 But when I was 19 and listening to the original cast album in Bermuda I decided my favorite song was the amusing (and beautifully rhymed) duet for the Roman patrician Senex and his son, Hero, both of whom are attracted to the same young woman, realize this startling fact, and then contemplate whether it could be true that she returns both of their affections.  The song is called “Impossible” and ends with the father and son, much upset by this, concluding:

The situation’s fraught!
Fraughter than I thought!
With horrible, impossible, possibilities!

I laughed out loud at “fraughter,” and for the first time admired the cleverness of Stephen Sondheim.  I’ve been his fan ever since.

What never occurred to me was that when I was an old man I would be on the stage singing that very song, playing the role of Senex (who also gets to perform the lead part in the show stopper number, “Everybody Ought To Have a Maid”).  [The photos are from rehearsals.]


Not only that, it would have also surprised the young me that with me on that stage would be my very own husband, the extremely talented David Vargo, having a great time as Hysterium, the “Slave In Chief” to Senex!  It’s our second musical together.  Last year we also were in Sondheim’s “Into the Woods.”

And once again we’re performing with the terrific people at Little Theatre Off Broadway in Grove City, Ohio (a suburb on the south side of Columbus).  There is a large cast, a wonderful director and musical director, a dedicated crew, and an elaborate set and colorful costumes.  The whole thing is very funny.  Come see FTH and be prepared to laugh steadily for two hours at our antics in ancient Rome! 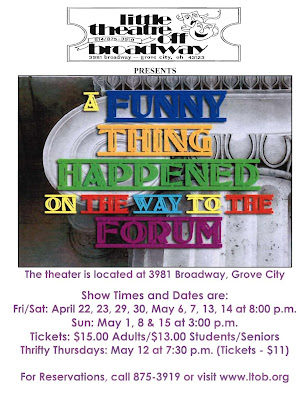