Five years ago Senator Bernie Sanders (I, Vt.) made an amazing speech on the Senate floor outlining how the rich have taken over the country and are ruining it for everyone else.  I thought it was a major wakeup call and so I recorded it and showed it to my friends.  It can be found on YouTube at https://www.youtube.com/watch?v=qU2P6OAbevw.   The speech will be familiar to those who have been listening to his current speeches as a candidate for the Democratic nomination, except since then things have gotten worse due to the Supreme Court’s outrageous Citizens United decision, which struck down limitations on how much the rich can spend on buying elections.  I endorse fully all of Senator Sanders’s remarks on the financial disparity existing in this country and how important it is to do something about it immediately.  With things as they are Congress is bought and paid for by the rich, and the current deadlock there will continue until this is no longer the case.  I also favor most, though not all, of Bernie’s other proposals on many topics.  He is smart, dedicated, and unwavering in pushing an agenda this country desperately needs to adopt.  I truly admire his logic, his intelligence, his commitment, and his talents at explaining the complexities of the mess we are in.

But it’s vital that we nominate a Democratic candidate for the presidency who will win the election and prevent a Republican from getting into the Oval Office.  A Republican president would partner with a Congress containing Republican majorities in both the House and Senate, driving a Republican agenda that gives what’s left of the country to the rich and does nothing to deal with the rest of the issues that need to be solved.  Every bit as important, the Supreme Court’s quasi-liberal majority hangs by two slender threads: the occasion support of Anthony Kennedy and the continued health of the four true liberals, one of whom, the wonderful Ruth Bader Ginsberg, is 82 and in delicate health.  One more conservative on the Court replacing her would give the foxes the key to the chicken coop, and out would go fair taxation, civil rights, and federal regulations controlling everything from safety to climate change to education to consumer protection (the list goes on and on).  This must not happen, and Democratic voters must make sure it doesn’t happen.

Why won’t I support Bernie Sanders in spite of my admiration for his positions?  Let me give you a list.  Any one of these things alone would not be enough to keep him from being a strong candidate, but cumulatively they make his nomination a very, very risky proposition.  Here’s the list:

1.  He’s an announced Socialist.  Yes, I know that he’s a “democratic socialist,” a far cry from the basics of Marxism and communism, and that all the term really means is that he favors solving problems through the government, with his announced model being the Scandinavian countries.  But the term “socialist” has been mingled with “communist” for so long that to many voters subtle distinctions are lost and what they hear leads to images in their heads like this: 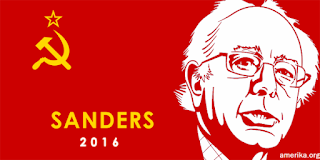 Even if the voters learn, in large numbers, what socialism is, they then will be told by the opposition that funding socialized programs will cost them a great deal more in taxes.  Based on 2012 rates this is true.  While the USA then had a top marginal tax rate of 41%, Denmark was at 60.2%, Sweden 56.6%, the Netherlands 52%, Finland 49% (although, surprisingly Norway was lower than the USA at 40%!).  Bernie will tell voters that this rise in taxes can be paid for by taxing the wealthy and (at last!) making them pay their fair share, but, alas, that depends on the cooperation of Congress (at which point we all laugh loudly).  I know that Bernie’s supporters are legion and strongly want this issue to go away, and they have clever ways of trying to help: 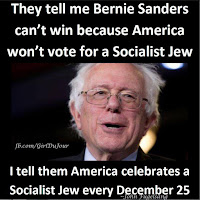 Humor aside, electing a socialist President of the United States is no small step.  It is a major change—Bernie himself is calling for a “revolution”—and lots of voters will stick to the devil they know rather than the devil they don’t. 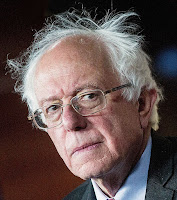 2.  He’s too old.  If elected, President Bernard Sanders will be take the oath of office in January of 2017, the year that he turns 76, making him the oldest person ever to enter that high position (Reagan was 69, turning 70 shortly after being sworn in to his first term).  Bernie’s in good physical and mental shape now (as far as I know), but I myself am 72 and I know that septuagenarians like us can fall apart fast, we get set in our ways, we have more and more difficulty suffering fools gladly (an issue, see below, that Bernie already has major problems with), and the pressures of the toughest job in the world can land stronger and much younger leaders in major trouble with matters both mental and physical.  Ask any septuagenarian you know if this isn’t of some concern to them and most will say that it at least gives them pause.

3.  Bernie doesn’t play well with others.  In an article entitled “The Trouble With Bernie,” http://lansingcitypulse.com/article-12189-the-trouble-with-bernie.html, author Mickey Hirten, who agrees with almost all of Bernie’s positions on the issues, says that he would make an awful president based on what those Vermonters who’ve had to work with him in the past experienced.  Hirten was the editor of the Burlington Free Press when Bernie lived in Burlington and was the state’s only congressman.  He dealt with him on a regular basis.  Hirten comments:

Considering that the Free Press' editorial positions were very liberal, reflecting the nature of a very liberal Vermont community, one might think that meetings with Sanders were cordial, even celebratory.

They weren't. Sanders was always full of himself: pious, self-righteous and utterly humorless. Burdened by the cross of his socialist crusade, he was a scold whose counter-culture moralizing appealed to the state's liberal sensibilities as well as its conservatives, who embraced his gun ownership stance, his defense of individual rights, an antipathy toward big corporations and, generally speaking, his stick-it-to-them approach to politics.

Hirten quotes others who know Bernie.  Chris Graf, long-time Associated Press bureau chief in Vermont: “Bernie has no social skills, no sense of humor, and he's quick to boil over. He's the most unpolitical person in politics I've ever come across.”  A Vermont weekly spoke with Bernie’s former staff members and reported that “They characterize the senator as rude, short-tempered and, occasionally, downright hostile. Though Sanders has spent much of his life fighting for working Vermonters, they say he mistreats the people working for him.”  Steve Rosenfeld, Sanders' press secretary during his 1990 House campaign, is quoted as adding: “At his worst, he falls prey to his own emotions, is unable to practice what he preaches (though he would believe otherwise) and exudes a contempt for those he derides, including his staff.” 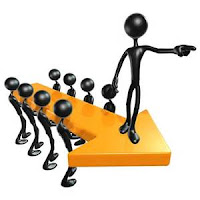 In a recent Time Magazine column political writer Joe Klein had this to say concerning Bernie’s comment about Hillary’s “damn emails” during the first Democratic debate:

If you kept the Brooklyn accent and replaced “emails” with “bunions” or “heartburn” or “kishkes” (Yiddish for intestines), you could have been eavesdropping at any given Thanksgiving dinner of my youth.  All Jews have an Uncle Bernie . . . . [H]e was a humorless Old Testament Jeremiah, not the sort of person you’d want holding forth in your living room for State of the Union addresses or declarations of war.  He barely smiled.

4.  He has no sense of humor.  As Klein just noted and others quoted above agreed, Bernie has no sense of humor.  His attempts at showing otherwise, appearing on Ellen DeGeneres’s TV show and trying hard to joke, are painful to watch.  Imagine a President of the United States who grumps his way through his job and you see how such an attitude can be a major flaw.  Frankly, this is a deal breaker for me.

5.  He’s Jewish.  I think the American People are ready, or at least almost ready, for a Jewish president, but he/she had better be personable and charming or it’s a no go.  Bernie is not that attractive candidate (which is a shame given that Jews typically have a terrific sense of humor).  Sadly, there is still much anti-Semitism in this country, probably more than even polls can reveal.  In a close race the percentage of the population who would refuse to pull the lever simply because a qualified candidate is Jewish might be enough to swing the election the other way.

Conclusion.  None of these things, in and of themselves, would necessarily keep Bernie Sanders from being the best candidate in 2016 for President of the United States of America, but combined they are a dangerous political mixture.  If the Republicans nominate one of the clowns currently at the top of their polls (Trump, Carson, Cruz) Bernie would have a so-so chance at winning, but in all likelihood in the end the Republicans will come up with a more palatable choice (Rubio, Jeb, Kasich), and Bernie would be in major trouble.

Hillary Clinton (sigh) has flaws, but she is obviously qualified—from day one—to be President of the United States, and is very electable.  She’s highly likely to stomp anyone the Republicans nominate.  Given the vital importance of keeping a Democrat in the presidency at least until there are more liberals on the Supreme Court and Congress is better balanced, it’s my opinion that making Hillary the nominee is the smart thing to do.  I wish Bernie Sanders well, but he’s not the best candidate for the job.

“What My Knees Have in Connection with Bernie Sander’s Candidacy,”  February 27, 2020; https://douglaswhaley.blogspot.com/2020/02/what-my-knees-have-in-connection-with.html

“The Shame of Republicans in Congress,” March 23, 2015;http://douglaswhaley.blogspot.com/2015/03/the-shame-of-republicans-in-congress.html