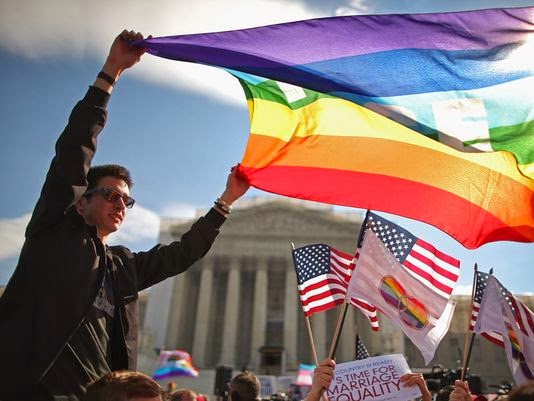 After United States v. Windsor,  the United States Supreme Court decision last June that struck down the part of the federal Defense of Marriage Act [DOMA] forbidding the federal government from recognizing gay marriages validly performed in a jurisdiction where they're legal, I wrote a blog post predicting that the Court would go further next time and rule that a gay marriage valid in one state is valid in all states.  [See Related Posts below.]  Now, on Valentine's Day, I go further.  Certainly by the end of June of 2016, and quite possibly by the end of June in 2015 the Court will rule that any state law forbidding gays to marry is unconstitutional.  That will instantly make gay marriages possible everywhere, a stunning development.

When the Court handed down the DOMA decision it allowed Edie Windsor to get back the $363,000 the federal government had forced her to pay as an inheritance tax when her wife died, and made Edith a hero of the gay movement.  But the Court’s sweeping language in swing-vote Justice Anthony Kennedy’s majority opinion used both the Constitution’s due process and equal protection mandates to invalidate DOMA, stating:
DOMA under­mines both the public and private significance of state ­sanctioned same-sex marriages; for it tells those couples, and all the world, that their otherwise valid marriages are unworthy of federal recognition. This places same-sex couples in an unstable position of being in a second-tier marriage. The differentiation demeans the couple, whose moral and sexual choices the Constitution protects . . . .
The opinion carefully noted that it was not deciding the validity of state laws that forbade recognition of gay marriages valid in other states, but dissenting Justice Antonin Scalia wryly commented that “no one should be fooled; it is just a matter of listening and waiting for the other shoe. . . . By formally declaring anyone opposed to same-sex marriage an enemy of human decency, the majority arms well every challenger to a state law restricting marriage to its traditional definition.” 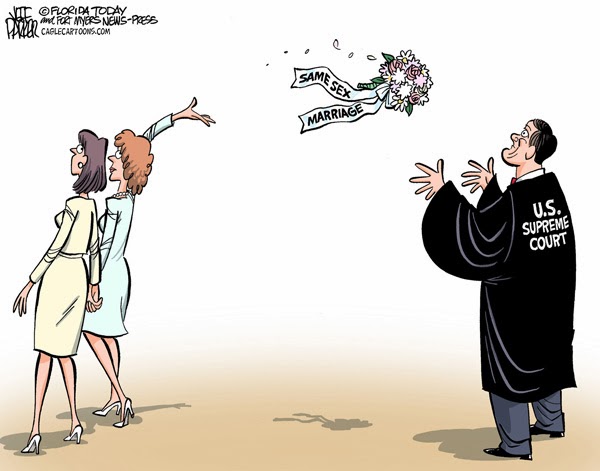 And Scalia was right.  Suddenly all over the country lawsuits are demanding recognition of gay marriages granted in other jurisdictions.  In Cincinnati, Ohio, United States District Court Judge Timothy Black handed down a decision on December 23, 2013, that required the State of Ohio to issue a death certificate to a gay man indicating he was married to another man even though Ohio has a constitution amendment (adopted overwhelmingly in 2004) forbidding any recognition of gay marriages.  Judge Black stated


The question is presented whether a state can do what the federal government cannot – i.e., discriminate against same-sex couples … simply because the majority of the voters don’t like homosexuality (or at least didn’t in 2004). . . . Under the Constitution of the United States the answer is no. . . .  Once you get married lawfully in one state, another state cannot summarily take your marriage away.


This was followed immediately by a similar lawsuit filed in the same court on February 10, 2014, but this time the issue was the refusal of Ohio to recognize both gay parents as parents for children they’d adopted elsewhere as a married couple.  "At both ends of our lifespans, a marriage is a marriage. A family is a family," said the attorney representing the plaintiffs.


But this suit, and others like it (on February 12, 2014, a federal judge in Kentucky ruled that that state must recognize gay marriages valid in another state), are only challenging the right of one state to resist what another has done.  Making even bigger news are attempts to have federal courts declare that any state law or constitution that forbids gay marriage is itself unconstitutional.  Courts in Oklahoma, Utah, and Virginia have so ruled in the past few months.  There are at least 45 pending lawsuits in 24 of the 33 states that ban gay marriage challenging that ban, with more filed each month.  The resulting judgments tend to favor the gay couples at the trial level, but we have yet to hear from a federal Court of Appeals, where results will almost surely vary.


However the Courts of Appeals decide the issue, it will be presented to the United States Supreme Court, probably before the end of 2014.  The same five Justices who voted in favor of Edie Windsor last June are still on the Court, and unless they have lost their nerve they’re highly likely to grant appeals in one or more of these cases, with the result that Justice Scalia unhappily predicted.  The Court hands down all decisions on which it’s heard oral arguments since October by the end of the following June.  So perhaps by June of 2015, and almost certainly by June of 2016, historic decisions in favor of gay marriages are coming.


Let’s use some big words to add to the prediction I’m making.  “Zeitgeist” is a word referring to the “spirit of the times,” and—gaining force day by day—there’s now a powerful Zeitgeist in the United States in favor of gay marriage.  It’s so strong that it amounts to a juggernaut, another big word, this one meaning an “unstoppable force.”  All across this country an amazing switch in the Zeitgeist has made acceptance of gay marriage a foregone conclusion, with the question not being whether gay marriages will legally recognized but simply a question of when.  Seventy percent of Americans between the ages of 18 and 29 support it.  Everyone has gay friends, neighbors, coworkers, family members, etc., and know that they are not the demons once routinely assumed.  What was not that long ago thought impossible to imagine is now commonplace.  Judges are not exempt from being influenced by the forces at work here; they are human too.  And, it is famously said, even “the Supreme Court reads the newspaper.”  The gay marriage juggernaut rolls on as the Zeitgeist turns the wheel. 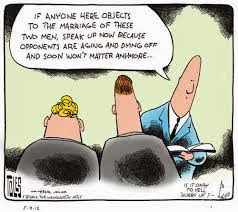 In Ohio there’s currently a big debate between gay advocacy groups as to whether to put on the ballot in 2014 or in 2016 a question to the voters on repealing the Ohio Constitution’s ban on gay marriage.  The argument for waiting is that 2014 is not a presidential election year, and the key thing on the voters’ minds will be the reelection of popular governor John Kasich.  That means a big Republican turnout and not much participation by young voters, who will be more energized by the 2016 presidential election.  If the issue fails to pass, that would be a major setback for another attempt in 2016.  What to do?


I played some minor part in gay rights battles in Ohio, and I’m certainly in favor of getting rid of the homophobia ensconced in our state constitution during the anti-gay fury of 2004.  But it’s time consuming and expensive to mount a campaign, win or lose.  If my predictions above prove true—which I believe to be highly likely—we ought to hold off on the 2014 effort and see if the United States Supreme Court doesn’t make the whole endeavor moot before the fall of 2016. 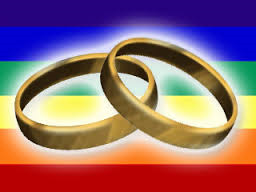