What Atheists Can Learn From the Gay Movement 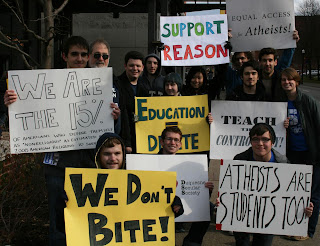 I’m in south Florida meeting up with various atheist groups trying to promote “Imaginary Friend,” my atheist thriller, and at an event last week one of the organizers compared the nonbeliever movement to the similar battles so successfully waged in the last few decades by the gay community.  I think there’s much to that comparison, but major differences abound as well.  This blog post is about that.


When I was heavy into my gay activist period (the 80s and 90s) it never occurred to me that we’d be successful as quickly as events proved.  My generation was fueled by anger, but today’s activists are animated by a sense of entitlement to their share of the American dream, an attitude, amazingly, now shared by the majority of the straights in this country.  With all those people thinking that gays ought to be treated like everybody else, it’s come true in a breathtakingly short period of time.  Whenever it occurs to me how brief was the journey from pariah to (ho hum) neighbor, I’m gobsmacked.  I certainly never thought it would happen in my lifetime.
Atheists these days are truly making gains but they aren’t (as a group) even up to the “anger” stage.  Instead, too often they’re content to pass unnoticed, much like the hidden homosexual community of, say, the 1960s.  Leaders of atheist groups don’t have that attitude, and their anger can be palpable and fierce, but their sense of the wrongness of society’s attitude towards nonbelievers is not always shared by their followers, and certainly by not by most nonbelievers, who would rather not discuss the subject and prefer to be left alone with what they view as a private matter.  We saw that same lassitude in the gay community in the early days (“Why are you stirring things up?---we’re doing fine in our closet, thank you very much”).  That’s understandable, of course, but it won’t lead to a change in society’s treatment of atheists anytime soon.
To remedy it atheists (under whatever name: freethinker, secular humanists, nonbeliever) must learn to gather together, exchange views, and, as the opportunity arises, take actions to protest or remedy injustices (pitching children from their home if they won’t attend church) or our-and-out illegal activity (firing people because they are nonbelievers, for example).  Many atheist groups hold annual events to fire up the non-faithful.  February 12 is “Darwin Day” (his birthday) and here in Florida a number of groups are holding festivities celebrating his life and educating people about his work and beliefs.  Others have book clubs, regular meetings with programs, and even radio and TV shows.  I’ve done bookreadings from my novel at such events in four states.


As the gay movement did, atheists must pick their battles carefully.  Where an obvious injustice has occurred (the Boy Scouts now say they’ll allow gay but not atheist scouts) public sympathy can be brought to bear to aid the protest.  But demonstrations that have as their only function riling the other side (1) don’t attract public sympathy and (2) are counterproductive because the despised group ends up even more despised.  We saw this in the gay community.  A chant at a pride parade of “Two-four-six-eight---How do you know your wife is straight?” is a mistake.  It’s the equivalent of poking the bear, and it gains you enemies but no friends. 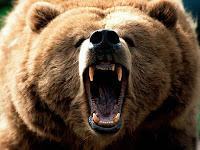 Atheists therefore should concentrate their efforts on asking for the right to be treated like everyone else, and to be judged on whether they are good people or bad people and not on their religious beliefs (or lack thereof)---a matter of privacy all people deserve.  But an atheist group that attacks the very concept of religious belief is going too far, and that particular bear is going to bite back  Religious actions should only be directly attacked when they wrongly warp public policy.  Using the Bible to keep women in their place, gays from the altar, or to invade a Muslim land is wrong and should be condemned as such.  Ronald Reagan appointed a Secretary of the Interior who allowed the looting of the public parks because he was a devout man who believed Jesus was about to return and thus there was no need to protect the environment.  That particular bear should be beaten senseless. 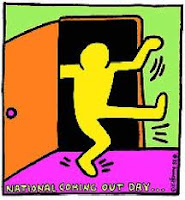 The biggest thing the atheist movement can learn from the gay movement is the importance of coming out.  When society discovered how very many homosexuals lived in its midst, and that gays were children, neighbors, coworkers, etc., continued hatred of gays became harder to maintain.  These days public homophobia is limited to nut cases (“God Hates Fags”) or pockets of repression in small communities that have yet to get the message.  When we started the gay rights battles in Columbus, Ohio, in the early 80s, we had a mayor who called us “homos” and a congressman who declared he had no gay constituents even though his district encompassed both the Ohio State University campus and German Village, the leading gay neighborhood in the city.   Nowadays the mayor comes to all the gay events and our congressional representatives eschew any hint of homophobia (excepting the Republican opposition to gay marriage).  If all the closet atheists out there told their families, neighbors, coworkers, etc., of their nonbelief a similar transformation would eventually occur.  So, blog reader, if you’re a nonbeliever, don’t take pride in keeping that to yourself.  However painful, you should start telling people.  Begin with the “safe” ones (your best friend who’s not religious) and go on from there.  Just as the gays did, you will find the experience liberating.  By asserting who you are you become part of an important movement now occurring on this planet.  You only have one life to live.  Make the most of it.
But there’s one major difference between the gay and the atheist movements which makes things much harder for the latter.  Once society listened to the evidence that gays were not moral monsters and were just like everyone else except for the person they loved, gays presented no real danger to ordinary life, and acceptance of gays was relatively painless.  But atheists are a danger to the very foundation most people stand on: a belief in an afterlife and the protection of a benevolent deity.  If atheists are right and that belief is wrong (so that humans live and die with no more hope of salvation than the ant you stepped on this morning on the way to work), that message is abhorrent and will be resisted loudly by huge numbers of very upset people. It’s for this reason that atheists are demonized like few others, witness the following: 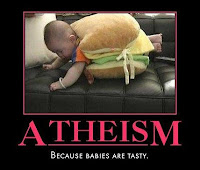 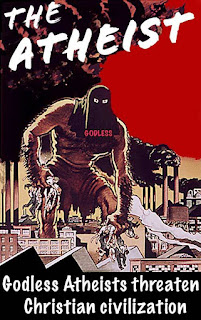 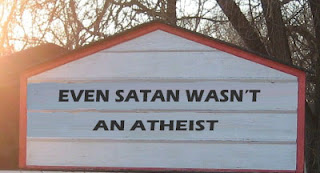 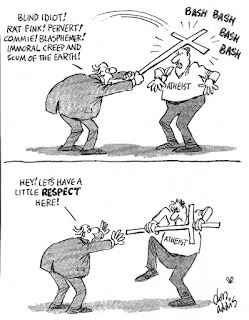 Okay---atheism is a hard sell, but whoever said you only get to do easy things in life?  However hard the task, atheists are working at accomplishing it.  Join them.