“I Don’t Believe in Coincidences!” 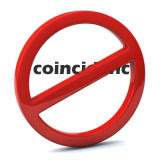 It’s a popular phrase: “I don’t believe in coincidences.”  You hear it all the time in actual conversations, movies, TV, etc., and particularly in detective fiction.  The problem with uttering it is that it immediately identifies the speaker as dimwitted.  With billions of people interacting, billions of events occurring, billions of catastrophes (large and small) causing their misery each and every day, well then, billions of coincidences will occur.  They’re a routine part of life.  To imbue them with some sort of mysticism is romantic twaddle or muddled thinking.

But if the speaker truly means that coincidences don’t occur, that’s a child’s view of the world, and it’s bad because it then often proceeds to a false assumption: something else is going on, be it the creation of a superstition, or seeing the devil, a witch, or a god at work, with the consequence that irrationality replaces rationality . . . never a good thing. 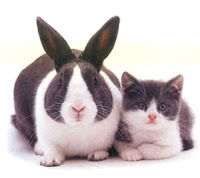 Human beings are pattern-creating animals, and they’ll find these patterns in everything from pawprints of game on the ground to images of famous people in the clouds.  Sometimes the patterns reveal useful information, like the pawprints, and sometimes not, like celebrity clouds.  Believing is easier and smarter and than not believing if you must make a choice quickly, and evolution has programmed us to believe before not believing.  Why?  Because the noise in the bushes might be a lion or something else.  The penalty for not believing (“not a lion”) and being wrong is so severe (death) that believing (“is a lion”) is the wiser choice, thus our bias goes for seeing patterns, even when they don’t exist and sometimes even when the evidence is overwhelming that they don’t exist (witness the belief that Obama is a Kenyan or that George Bush evilly ordered the World Trade Center destroyed). 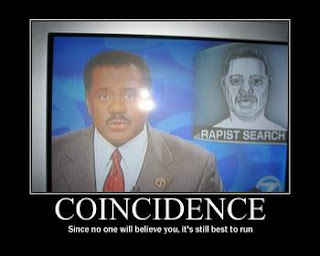 Much is made of the facts that supposedly spark a spooky connection between Abraham Lincoln and John F. Kennedy.  Here is the usual list (copied from Wikipedia):

Weird, huh?  Well, yes, but investigation makes it less strange.  First of all there are errors.  Lincoln, whose life is much documented, never had a secretary named Kennedy.  Secondly, similar lists can be compiled about any two Presidents.  In just thirty minutes of Google search I compared Presidents William Henry Harrison (February 9, 1773 – April 4, 1841), and James Abram Garfield (November 19, 1831 – September 19, 1881)  and found that both were from Ohio, died in the first year of their term as President, only twice in US history have there been three presidents in one year: 1841 (Van Buren, Harrison, Tyler) and 1881 (Hayes, Garfield, Arthur), both had many children and both saw one of their children die, both were elected to the House of Representatives and then the Senate, and were distinguished military generals.  Harrison was the first President to die in office, and Garfield the second to be assassinated.  Both strongly advocated ties between the United States and South America, with Harrison even travelling there at a time when such travel was difficult.  Each had eight letters in his last name, and five in his middle name.  If I searched their lives carefully for their children’s names, pets, parents, siblings, hobbies, etc., who knows what else I could add?


Next consider that the Lincoln/Kennedy comparison is only listing “hits” while ignoring vast numbers of facts that show major differences between the two men, so it’s a rigged game.  But finally, even if the Lincoln/Kennedy comparison is a fantastic list of similarities, given all the zillions of people in history who could be compared, there is bound to be one set of comparisons that has a fantastic number of hits, just as there is one lucky lottery winner from the millions who buy tickets.


True coincidences (and not things disguised as coincidences like the evil phone calls I used to get from my mother on April Fools Day) are just random events, matters of luck, outliers in the usual events of life.  Viewed in such a light, the Lincoln/Kennedy similarities are just an interesting coincidence, not evidence of anything sinister, superstitious, or directed by the gods.


During these first three month of 2013 I’m snowbirding in Wilton Manors, Florida, a suburb of Fort Lauderdale, living in half a duplex.  The other half is inhabited by John Rossetti, a gay man from Columbus, Ohio, my home town, who I had never met before.  What are the odds of that?  But wait, there’s more!  John earns extra income by pet sitting when people go on vacation.  Two weeks ago he had a week-long job pet sitting for a puppy who was staying home while his two gay owners went on a cruise.  John and I have become great friends---he’s one of nicest people on the planet---we go to movies, eat some meals together, and typically chat one or more times a day.  But I didn’t see much of him that week he was dog sitting, except when he was back for brief visits home to pick up this and that.  On the Wednesday of that week we talked as we passed in our parking lot around 3 p.m. that afternoon, and he mentioned he would be done with the job on Saturday.  That evening I had to drive over three miles to a dinner with some friends who live in Fort Lauderdale.  I’d never been to their house before, and in the dark and winding back streets it was difficult to find.  Finally I pulled up into their driveway, and then went up to their door and rang the bell.


Imagine the surprise on both our faces when John Rossetti answered the door and saw me standing there. We both sputtered something like, “What are you doing here?”  A brief discussion revealed the truth: I had the house number of my friends too high by one digit, and they actually lived in the house next door!


Fort Lauderdale is a big place.  What are the chances that I would---by happenstance---make this mistake and ring the doorbell of the wrong house only to find my own neighbor answering the door?  It’s the strangest coincidence I’ve experienced in my life (John too, I suspect).


But it felt like hitting the lottery and not winning anything, damn it! 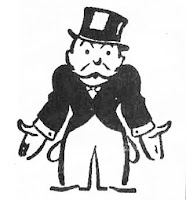