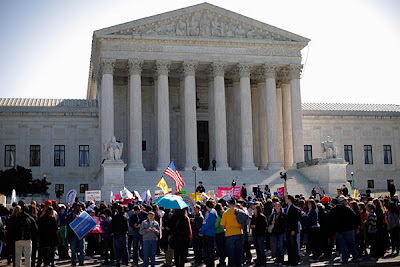 As I’ve discussed before [see "Jumping the Broom—How Married are Gay Married Couples?" July 17, 2011] the United States Supreme Court is divided into four liberals, four conservatives, and then there’s Justice Anthony Kennedy, who’s always the swing vote in cases where those labels are important. At the Ohio State Law School, where I teach, we recently had a faculty skit at the law school’s comedy night in which professors gave mock lectures about their subjects. When it came time for the Constitutional Law prof to speak he explained that "Constitutional Law is easy: it’s whatever Justice Kennedy is thinking at the moment."


When the Court heard arguments on the constitutionality of the Obamacare statute everyone was studying the questions and comments of Justice Kennedy very carefully, and there was much casting of tea leaves over what his musings during the oral arguments suggested. Those arguments themselves were astonishing: six hours of attorneys being grilled by the Court, when the usual time is two hours or less. The Court knew how important this one was. Therefore when the decision came down on this past Thursday and the vote was five to four to uphold the law, the shock was that Justice Kennedy was one of the dissenting four Justices, while the four liberals were joined by the usually very conservative Chief Justice John Roberts. How in the world did that happen? With Kennedy in their pocket, the four conservatives were set to take down Obamacare, to the delight of the nation’s Republicans. It would have been a major advancement for the presidency of Mitt Romney. Instead the decision to uphold the law helps President Obama greatly in his bid for reelection.

Everywhere conservatives (just tune into Fox News to verify this) are slumped across tables, weeping, pounding with their fist and moaning, "Why? Why?" 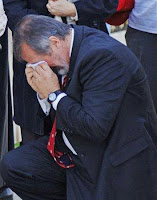 John Roberts was nominated to be Chief Justice by the second George Bush, and confirmed by the Senate without much controversy. He’s very smart, a true conservative, young (only 50 when confirmed, so he’ll be running the Court for a long time), and even funny (during hearings on his nomination one Senator asked him what he would like history to say about him and he instantly replied, "That I was confirmed!"). Courts are known by the term of office of the Chief, so it looked like the "Roberts Court" would fulfill all the expectations of the President and the party that pushed his nomination through: conservative decision after conservative decision. But at the time of his swearing in, Chief Justice Roberts vowed to make the Court objective, and to push for unanimity. I assume he meant that, but, alas, it wasn’t to be. In decision after decision the Court has split into the predictable liberal/conservative groups, leaving all the heavy lifting to Anthony Kennedy. Roberts himself was reliably one of the four conservatives in each of these cases. The majority decision upholding Obamacare was written by the Chief Justice himself. It is massive—much longer than the usual opinions coming out of the Court. In it he carefully explores each issue, step by step, and convincingly explains that the portions of Obamacare that require an individual mandate to buy health insurance or face a penalty exceed the powers granted to Congress in the United States Constitution. This goes on and on, and was the reason why early reports of the decision mistakenly thought the law was being tossed out. But at the end of the decision the Chief Justice suddenly decides that if the individual mandate was viewed as a tax, it could be saved because the Constitution clearly allows Congress to impose a tax on the people. Thus the statute is constitutional after all. His opinion does hold unconstitutional the part of the statute that punishes the states if they don’t accept certain parts of the law’s requirements, but excising that portion left the rest of Obamacare as the law of the land.

The dissenting judges (Scalia, Alito, Kennedy, and Thomas) were infuriated. With a damning legal analysis they explain in convincing detail that there is no way to transmogrify the individual mandate into a tax, and that the attempt to do so is absurd. As I read their dissent, I’m forced to agree that they’re right, and that calling the mandate a tax is simply and obviously a mistake as a matter of law (I hasten to add that this is not my field). The dissenters then explain that proper analysis would also lead to invalidating the entire statute since the portion the majority held to be unconstitutional cannot be severed from the rest of the statute without the Court just guessing whether Congress would have passed the rest without it. The majority is simply wrong in the dissenters’ careful and persuasive analysis, so the majority has given invalid reasons for upholding Obamacare.

It will amaze readers of this blog to learn that I agree with the dissenters as to their conclusion about the mandate being a tax, and if they’re right as to that, the Court should have stricken Obamacare from the United States Code. This leads to the real question: why would Chief Justice John Roberts have done something that appears so wrong (holding the mandate to be a tax) and thereby saved the statute from being declared unconstitutional? The answer, I suggest, is something that has bothered Justices before: the weight of history.

When the first George Bush appointed David Souter to the Court he couldn’t have chosen a more conservative man for the position. All of Souter’s prior opinions on the New Hampshire Supreme Court had been conservative in the extreme. But when Souter got on the Court his opinions became more and more liberal, disappointing those who had supported his appointment. I suspect that what happened to David Souter was that as he heard arguments from the freedom of life-time appointment to the Court, it began to occur to him that history books would be written about the "Jurisprudence of David Souter"and so he’d better think things through very carefully before voting. As he did so he discovered a side of himself that was more receptive to an appeal from the downtrodden and the voiceless, and found more of a necessity for the government to help them out. Traitor that he became to conservatives, he produced a jurisprudence that he himself could live with.

I don’t think John Roberts is about to become a liberal, but I do think that a similar historical judgment made him write the majority opinion when in normal circumstances he would have voted with his usual crowd. Roberts knows that the most shameful moment in Court’s last few decades occurred before he joined the Court when in Bush v. Gore(2000) the Court stopped the ballot recount in Florida and gave the presidency to Bush. It was a purely political move, and, given the facts, indefensible. Now John Roberts, who has to think about what history will say about his tenure as Chief, was facing another election-changing vote, and if he’d have voted as expected once again the Court would have produced a decision in which five Justices appointed by Republican presidents would have handed the election to a Republican.

He just couldn’t do it—not even if he had to create a tax that Congress didn’t intend. 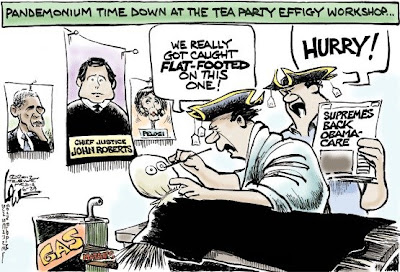