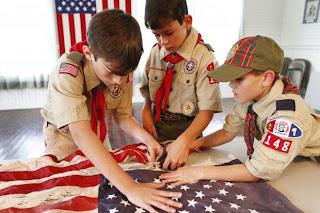 “What?” you might ask, adding, “Douglas, aren’t you supposed to be gay?”


Yes, of course I am, as the many posts on this topic in my blog indicate.  But I’m also a lawyer and an American citizen, and the United States Supreme Court made it clear in its 2000 Boy Scouts of America v. Dale decision that the Constitution’s first amendment protection of the right of association and freedom of speech allows private organizations to discriminate whenever they want.  That’s clearly right.  If I form an organization that bars homophobes I certainly don’t want the courts to say that I can’t discriminate on that basis.  If someone doesn’t agree with my restriction, they can say I’m a bigot all they like, but they can’t join.  Whether it’s moral or right for the Boy Scouts to ban gay scout members or leaders is a very different question than whether it’s legal to do so.


Many organizations discriminate against gays (or blacks, Jews, women, atheists, etc.) including major religions like the Catholic Church or local country clubs or private-member groups such as the Boy Scouts.  This fact is shameful, but true.  The Boy Scouts is a private organization with restricted membership.  It’s primarily financed by religious entities; 69.4% of scout units are chartered to faith-based organizations: the Mormons have control over 420,000 boys, with the United Methodist Church and the Catholic Church not far behind.  These religions would likely yank both their boys and their money from the Scouts if gays were included, which would arguably sink the Boy Scouts completely.  The upper leadership of the scouts has made the decision not to risk that.  Perhaps they’ll now offer a merit badge for homophobia. 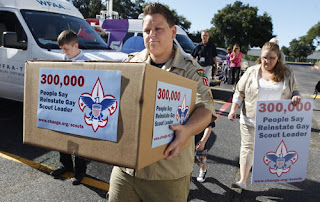 Many people in this country are outraged by the decision, and I join their repugnance for what the Scouts have done.  The latest refusal to allow gays in the Scouts followed the recent submission of a petition signed by over 300,000 people to undo the ban.  But in rejecting the petition and reaffirming the current anti-gay stance, Bob Mazzuca, the Scout’s chief executive, explained that:


The vast majority of the parents of youth we serve value their right to address issues of same-sex orientation within their family, with spiritual advisers and at the appropriate time and in the right setting. We fully understand that no single policy will accommodate the many diverse views among our membership or society. 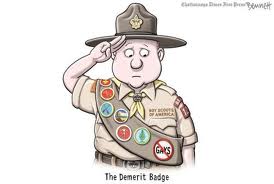 Some people will support the ban under the theory that gay scout leaders would, as a matter of course, abuse children under their care, or that, even if they didn’t, would create a bad model for the kind of person young scouts should emulate.  However, studies show that people who sexually abuse children are not defined by their sexual orientation, but are instead in a class by themselves: pedophiles (who certainly should not be scout leaders).  But if the above objections to gays were in fact valid then homosexuals shouldn’t be allowed to be teachers, or police officers, or baby sitters, or around children at all, even family members.  Happily, the world has adjusted to the idea of gays being among us and behaving just like everyone else without the need of special rules or bans.  All people, and not just gays, should be judged by one standard: their worth to the community.


Gay scouts, their parents, former gay scouts, and gay scout leaders have all protested the policy, and many straight people are equally upset at this discrimination. If you, reader, are similarly outraged what can be done?  The answer is easy: avoid the scouts.  Any organization that adopts a policy of exclusion should pay the penalty of forfeiting the respect and patronage of those who will not be part of the discrimination.  Country clubs across the United States have felt the sting of disapproval when they adopted policies that discriminated on the basis of sex, religion, etc.  Wikipedia lists some case histories at http://en.wikipedia.org/wiki/Country_club:


In one example, in 1990 professional golfer Tom Watson resigned from the Kansas City Country Club in Mission Hills, Kansas, in protest after local businessman and civic leader Henry Bloch was denied membership. Watson believed the club denied Bloch because he was Jewish. Although Watson is not Jewish, his then-wife and children are. After Watson's nationally-publicized protest, Bloch was offered a membership, which he accepted. Watson rejoined the club in 1995. Since that time The Kansas City Country Club has accepted several minority and Jewish members. The Augusta National Golf Club, where the Masters Tournament is played, is one of the best-known clubs that does not admit women. In September 2008 Katon Dawson left Forest Lake Club after a twelve year membership because it still has a whites-only restriction.


The same thing can be said about religions that discriminate in ways their members cannot indorse, but people frequently stay with a religion that discriminates in outrageous ways simply because they are too set in their ways to contemplate abandoning the church of their youth.  That decision comes with the penalty of the disapproval of others when they learn of someone’s fealty to a bigoted religion.  We “vote” in society by joining with others of similar beliefs.  We are rightfully suspicious of those who stay with a bigoted organization like the Boy Scouts on the dubious promise to change it “from within.”


Finally, note that the Boy Scouts also discriminate against atheists, but that’s defensible for two additional reasons: (1) atheists obviously can’t take the scout oath to be “reverent,” and (2) society generally doesn’t see anything wrong with discriminating against perfectly good people solely because they’re atheists.  When I was a Boy Scout I could have been thrown out because of this double-whammy, but fortunately I was only 12 at the time and hadn’t yet realized I belonged to forbidden groups.